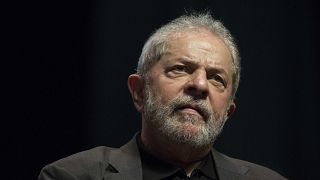 Lula, 75, led the Latin American country between 2003 and 2010, introducing popular social measures that lifted millions out of poverty. But the Workers’ Party politician fell from grace in 2017 when he was convicted on corruption charges and later imprisoned for nearly two years. His convictions prevented him from running in the 2018 presidential election against Bolsonaro.

But Brazil’s Supreme Court overturned the convictions earlier this year, clearing the way for him to try to secure a third, and final term, as Brazil’s leader and polls currently put him in the lead.

The former leader accuses Bolsonaro of “genocide” over his handling of the COVID-19 pandemic. Brazil has the second-highest death toll in the world after the US with more than 530,000 lives lost since the beginning of the crisis.

Bolsonaro, a far-right populist, is a COVID-19 skeptic and initially dismissed the virus as “a little flu”. He also regularly contradicted health officials over the necessity of social distancing measures and has come under fire over the country’s vaccine purchase strategy with prosecutors launching a probe against him last week for dereliction of duty over the acquisition of Indian-made vaccines.

For Lula, Bolsonaro’s ascent to power “is the result of a lie, a farce”. He accuses the current resident of the Palácio da Alvorada of having “blatantly” lied during the electoral campaign.

He told Euronews he has not yet made his final decision to run but would do so towards the end of the year.

“And if the PT (Workers’ Party) wants – and other allied parties are in agreement – I am totally available to be a candidate for president of Brazil and recover Brazil, make Brazil grow again, and place Brazil at the international stage as a leading country, like it was when I ruled,” he said.