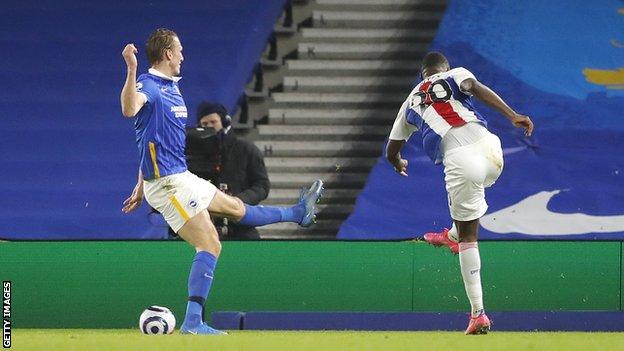 Crystal Palace scored with both of their two efforts on target

Brighton defender Joel Veltman says the manner of their Premier League defeat by Crystal Palace felt like "a robbery" that has pushed them towards the "danger zone".

The Netherlands international swept in an equaliser for the Seagulls after Jean-Philippe Mateta had earlier backheeled Palace in front from their first real attack.

But while Graham Potter's side dominated possession and had 25 shots on goal, a remarkable conclusion saw Christian Benteke volley a dramatic winner for Palace deep into added time with only their second shot on target.

The result sees Palace move up to 13th with Brighton in 16th, just four points above a resurgent Fulham in 18th and at risk of being drawn into a relegation battle.

"It is unbelievable. They are getting away with it," said Veltman. "It feels like a robbery of our points. The chances we didn't finish and they had half a chance and Benteke scored. We have to score more.

"Because of this result we are getting in the danger zone. We have to react and West Brom away is a very important game."

Having come into this fixture on the back of a six-game unbeaten run Brighton fans could have been forgiven for looking at the second half of the season with optimism.

However, they will now be concerned at the prospect of their side being dragged into a fight for top-flight survival.

While Potter's side play adventurous and easy-on-the-eye football, their ability to score goals has undoubtedly contributed to their current predicament.

Ten days after frustratingly failing to convert any of their 26 shots on goal against Aston Villa, they at least went one better this time around courtesy of Veltman.

The 29-year-old's left-foot effort had looked like being a springboard for them to find a winner but they somehow contrived to lose a fixture in which they enjoyed 75% of the ball and forced 13 corners while conceding none.

Potter will desperately hope that his forward players can now step up and provide the firepower that they will need to edge to safety.

The likes of top scorer Neal Maupay, who has scored just three goals in his last 19 Premier League appearances, endured another difficult evening, while Danny Welbeck, Lewis Dunk, Pascal Gross and Adam Lallana were all wasteful when presented with good opportunities.

'It’s a wonderful feeling' – Hodgson on Palace win over Brighton

Arriving on the south coast without the influential Wilfried Zaha, and after disappointing defeats by Leeds and Burnley, few would have expected Palace to collect maximum points from this encounter.

But while the manner in which they achieved it was extraordinary, manager Roy Hodgson will be delighted by the way his side persevered and soaked up sustained periods of pressure.

He will also feel vindicated by the five changes he made to his team from their defeat to the Clarets.

Joel Ward and Tyrick Mitchell both completed their defensive duties diligently, while no player made more clearances than Gary Cahill (nine) at the heart of the Eagles' defence.

On-loan Mainz forward Mateta had the physical presence to hold off Ben White before scoring a delightful opener, while Andros Townsend, another player returning to Hodgson's starting XI, dug out a wonderful late cross for Benteke to score the winner.

Brighton manager Graham Potter speaking to BBC Match of the Day: "It's sore, I'm bitterly disappointed with the result because I thought we were the team pushing all the way, trying to get the winner ourselves.

"We have to respond, accept it and as painful as it is we have to move forward. You are watching the game, watching the team, we are trying to find the solution to score and to get punished at the end is a painful one.

"That's the nature of the league, how punishing it is, we have done a lot but clearly not enough. Whoever it had come against it would be painful because we were dominant in the game. The boys were doing everything to score, it felt like it was always in their penalty box never mind their half.

"I don't think we played badly, but results-wise we have to be disappointed and respond."

Crystal Palace boss Roy Hodgson to BBC Sport: "It's always great to score in the last minute, especially when we had to soak up a lot of pressure.

"The defending was very good, they threw their bodies on the line. We worked hard to make certain they didn't get many sights at goal. We didn't create as many chances we would like. The two we created from crosses were goals.

"Tonight from the very start we showed we'd make it hard for them to score. The bodies were there, headers were there, blocks were there. We took maximum advantage from the counter-attack.

"We get so hung up on statistics these days. The game is decided by goals. Goals are a question of how well you take your chances and defend theirs."

Monday Blues for Brighton – the stats

Brighton travel to The Hawthorns to face West Bromwich Albion in their next Premier League match on Saturday, 27 February (15:00 GMT). Crystal Palace host Fulham in their next top-flight game on Sunday, 28 February (12:00).

Champions League: Reformed 36-team tournament could be agreed this month

Man City 0-2 Man Utd: It’s not a lack of ability that has cost Manchester United the title – Shearer analysis