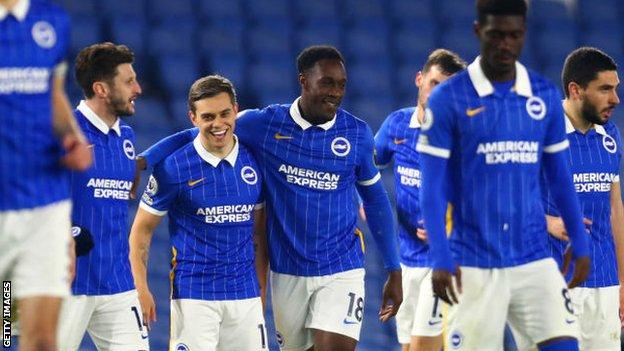 Newcastle winger Ryan Fraser said "we need to save our season" after Steve Bruce's side were convincingly beaten by fellow Premier League strugglers Brighton at Amex Stadium.

Goals from Leandro Trossard, Danny Welbeck and Neal Maupay ensured Brighton eased their own relegation concerns as they moved six points clear of the Premier League's bottom three and four above the Magpies.

Bruce's faltering side remain in serious trouble, with just two points separating them from 18th-placed Fulham – though they do have a game in hand on the Cottagers.

"The mood is the lowest it's been," Fraser said. "We just weren't good enough. It was a must-win game after doing all right in the last couple of weeks. It didn't happen for us tonight.

"We need to save our season now. We want to try and work on how we're going to stay in the league. We're not in the bottom three yet and we've still got games remaining. If we go and win our next game it looks rosy again. We've still got to play Fulham too."

Trossard's curled finish into the bottom corner in first-half stoppage time was the least Brighton's early dominance deserved, and Welbeck's sublime strike from outside the box doubled the advantage six minutes after the restart.

Maupay then put the result beyond any doubt as he met Pascal Gross' cross for his first goal in 10 league games midway through the second half.

The visitors were second best throughout and rarely threatened a comeback – they had only one shot on target – though Fraser was inches away from an equaliser when he fired against the post shortly after the break.

'We have let ourselves down' – Bruce takes responsibility for Newcastle defeat

Bruce reiterated prior to Saturday's game that he will "never walk away" from his role as Newcastle manager, though he admitted he had "not been good enough" over the past few months.

While Fulham's defeat by Leeds on Friday at least ensured Newcastle were not in danger of spending the international break in the bottom three, they are perilously close to suffering a third Premier League relegation in 12 years after two wins in their past 18 league games.

That dismal run has seen their buffer to the relegation places reduced from 10 points in early February, and there were few positives for the under-fire Magpies boss to take here.

"I'll take full responsibility," Bruce told Sky Sports. "We were nowhere near the levels we need to be. That's a concern.

"I've been in [the game] a long time. It's very difficult. We're still confident we can get out of the situation. I'll never give up the fight."

Speaking on BBC Radio Newcastle, former Magpies defender John Anderson said: "The manager is under severe pressure. If he sees the international break out he'll do well. Tonight it was hard to put into words how bad that was."

The return of forward Miguel Almiron after a two-match absence through injury was a welcome boost for Newcastle, but the Paraguayan was unable to have an impact as his side recorded just 25% possession in a largely passive first-half display, which ended with the loss of midfielder Isaac Hayden to a serious looking knee injury and Trossard's fine strike.

And though Fraser's strike against the woodwork suggested Newcastle may offer the necessary response after half-time, Welbeck's moment of quality ultimately ended any faint hopes of a point.

Newcastle have two weeks to dust themselves down, as they look to prevent their final-day meeting with Fulham becoming a desperate winner-takes-all encounter.

BBC Match of the Day pundit Leon Osman said: "It seemed tonight that they're going through the motions and not too sure how to get out of the situation that they're in. Something has to change. I'm sure they're working as hard as they can, but if they want to stay in the Premier League they need to start getting results."

Brighton manager Potter said victory over Southampton last weekend had given his side "renewed belief" of retaining their Premier League status.

The manner of this comprehensive win against a club directly below them in the table should convince his side that they are more than capable of securing a fifth consecutive season in the top flight.

Battling for survival has become familiar territory for the Seagulls, whose largest final margin to the bottom three since their 2017 promotion is seven points, and there was little sign of pressure in their play as they took command of a crucial game.

An inability to capitalise in front of goal and convert impressive performances into points has kept Brighton from mid-table security – a trait evident in the opening exchanges when 21-year-old Poland midfielder Jakub Moder failed to convert two early chances in his first Premier League start.

However, two expert finishes from Trossard and Welbeck either side of the interval left the visitors dejected, before Maupay added the gloss from close range to secure a second 3-0 win over Newcastle this season.

Having impressed against Saints with arguably his best performance since joining on a free transfer last summer, Adam Lallana also shone in a central midfield role with incisive passing through the Newcastle lines.

Brighton's fate is now firmly in their own hands, but tough games against Manchester United, Everton and Chelsea await after the international break.

"Scoring goals is the name of the game," Potter told BBC Sport. "Our performances in between the boxes have been really good, we've just been a bit short in the boxes. The second and third goals were really important for us."

The Seagulls boss added: "We just have to recover, analyse the game and see where we can improve. Our performances here have been quite good but we haven't got the results. The margins in the league are so small that you have to keep looking at how you're going to get over the line."

Brighton have beaten Newcastle home and away in a league season for the first time since 1978-79.The Seagulls have played more Premier League games against Newcastle (eight) without losing than against anyone else in the competition.Newcastle have scored just one goal in their eight Premier League meetings with Brighton. Only Sheffield United have faced a side more often and netted as few as one goal in the competition (one in 10 games against Manchester City).Brighton have won two of their past five Premier League home games, which is as many as in their previous 23. Newcastle have won just one of their past 10 Premier League away games and have failed to score in seven of those matches.Brighton scored two goals from outside the box in a Premier League game for the first time, last doing so in league competition in April 2017 against QPR in the Championship.

Brighton are away to Manchester United later that day (19:30).