Ahead of the British and Irish Lions’ Test series vs the Springboks this summer, live on Sky Sports, we look at who is impressing as the squad announcement draws ever closer Jack Nowell in action for the Chiefs

Which British and Irish players are showing the kind of form that could see them named in Warren Gatland’s Lions squad for the tour of South Africa?

Nowell’s recent injury woes look certain to end his Lions hopes but the England winger had one final chance to remind Warren Gatland what he can do. The battle of the top two Premiership sides was the perfect opportunity for Nowell and he did not disappoint as he helped Exeter beat Bristol 20-12 on Friday night. Simmonds once again impressed for the Chiefs

Nowell, who was physically imposing on attack making sure he always got over the gain line, also showed his strength and power by bumping off opposing winger Niyi Adeolokun.

He beat three defenders with 11 carries and was very busy in defence too.

Rob Baxter certainly believes that Nowell is more than ready for another Lions call-up: “Where he’s (Nowell) fortunate is that he’s got international pedigree, club pedigree at the highest level and has been on a Lions tour before, so Warren knows him and the character he is and the quality of player he is.

“If anything, he could probably enter a Lions tour in the best condition he’s ever been in.

“He won’t be at the end of a long season, he will be five, six, seven games in if we manage to get into the later stages of the Premiership. So probably absolutely perfect.” 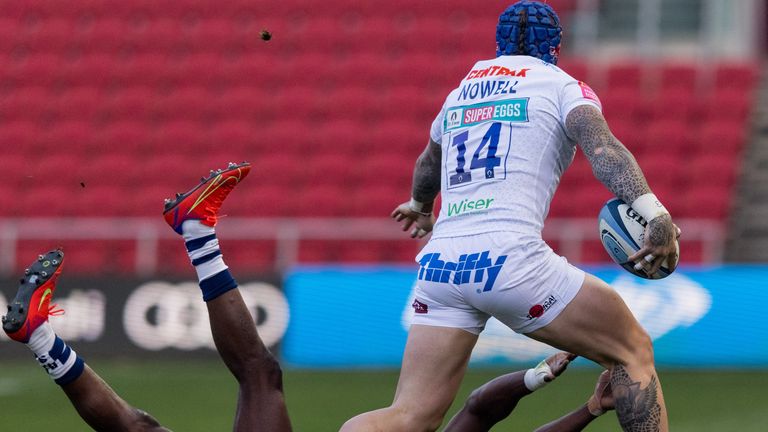 Biggar has got plenty of plaudits for his commitment to the Sa ints cause against Leicester on Saturday. It was the sort of gutsy display that the Lions will need in South Africa and will certainly not have gone unnoticed.

Biggar was obviously injured and leaving the field, however, he shrugged off the helping physios when he realised that Saints were down to 14 men and hobbled back into action – getting back to produce a match-winning tackle on Jasper Wiese.

Stuart Barnes certainly was impressed: “His form is fabulous, his Lions history solid as a leader of the 2017 midweek team and his kicking game ideal to take on the Springboks,” wrote Barnes in his Sunday Times column.

Jack Nowell in action for the Chiefs

“His U-turn was above and beyond the call of duty. What we witnessed was someone prepared to put his team-mates ahead of his personal aspirations with the Lions.

“I love bravery because it is a reminder that the cold analytics that have subsumed the game in so many ways still have barriers yet to break down.

“Analysts who have never been in the battle of an important game do not understand the impact a decision like Biggar’s has on the rest of the team. Once again Simmonds showed what he can do with an excellent performance for the Chiefs. Simmonds did leave the field around the 60-minute mark with a rolled ankle, however, he did more than enough to impress Gatland.

In similar conditions that the Lions will face in South Africa, Simmonds made a 62m in attack and set up a try for Tom O’Flaherty.

“His performance was fantastic, he had an absolute storm today, he was so strong and so quick,” said Baxter.

“It looks like he is going to take some handling when the pitches dry up and the sun is out, he is going to be running around with some abandon I hope.”