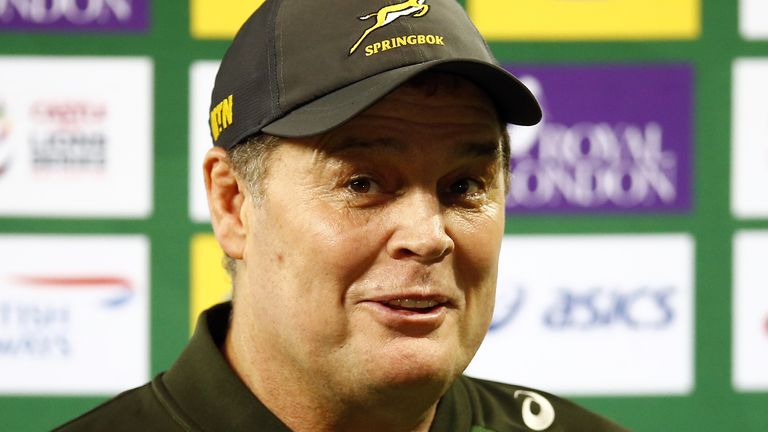 Owen Farrell has had two controversial tackles highlighted by Rassie Erasmus as tensions continue to simmer ahead of the British and Irish Lions’ Test series against South Africa.

Erasmus has used social media to hit back at Warren Gatland for condemning a dangerous challenge made by Faf De Klerk on Josh Navidi at Cape Town Stadium on Wednesday night.

The Springboks director of rugby has posted footage of England captain Farrell leading with the shoulder when making contact with Jasper Wiese and then bringing down De Klerk with what appears to be a high tackle.

The comments come one day after Gatland said he would seek clarification from officials over the De Klerk hit on Navidi, suggesting it should have been a red card.

“It looked reckless to me,” Gatland said of a moment that was reviewed by referee Jaco Peyper and the TMO. No arms and he’s hit the arm first and then the shoulder, but there’s definitely head-on-head contact.”

However, alongside a video of Farrell tackling Wiese, Erasmus tweeted: “While you (are) at it please get clarity on this alsp!! Penalty or play on? We have to 100% sure and aligned! Can’t agree more.”

And with the second clip of De Klerk being hauled down, he added: “If there is time maybe also get absolute clarity and alignment on this one please, I know its way after the whistle, but lets just align and get clarity to be sure.”

The discussion continues the escalating war of words between Erasmus and Gatland ahead of the first Test in Cape Town on July 24.

Erasmus opened fire on Monday when he made public that Alun Wyn Jones could make a dramatic return to the Lions squad and also said the tourists “won’t be afraid or scared” to face the shadow Springboks again on Saturday instead of scheduled opponents the Stormers.

Gatland continued to reject that idea after Erasmus made another attempt to revive it.

“I think he was trying to wind us up saying we’re scared,” said Gatland the morning after the Lions had lost 17-13 to South Africa ‘A’. “Sometimes he’s capable of doing that. I don’t see it as our role to prepare them for the Test series.”

Gatland aimed an additional swipe at his rival when he joked that Erasmus’ pretense as a water boy at Cape Town Stadium on Wednesday, complete with hi-vis bib saying ‘H2O’, was undermined by the fact he did not actually carry any water.

Instead, the mastermind of South Africa’s 2019 World Cup triumph dispensed advice to his players.

“I didn’t understand what his role was – you don’t run onto the pitch giving messages as the water boy without carrying water. My advice to him is to make sure he’s carrying water next time he does that.”