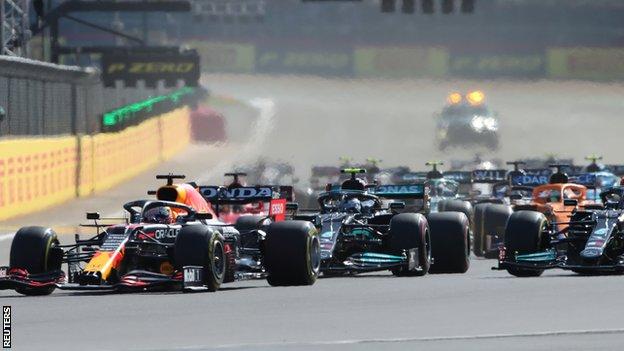 Build-up to the British Grand Prix is starts on the BBC Sport website from 13:30 BST on Sunday

At the circuit where the Formula 1 World Championship started in 1950, the sport made a decisive break with tradition on Saturday – and the results were inconclusive.

F1's first 'sprint' – a race on Saturday, one-third of the distance of a regular Grand Prix, to set the grid for Sunday's main event – ended with Max Verstappen winning from Lewis Hamilton. It extended the Dutchman's championship lead over the Briton by one point, and gave him the best opportunity to enlarge it further on Sunday.

After watching the Red Bull driver control the race from the front after passing Hamilton's Mercedes off the start line, it is tempting to conclude that the 'sprint' had failed in one of its objectives, of adding extra jeopardy to the Grand Prix.

Verstappen's Red Bull appeared the faster car – certainly Hamilton said he believed it was. If it turns out that way, putting Verstappen at the front for the start of the Grand Prix makes a close race on Sunday less likely rather than more so.

But that conclusion would be premature. The overarching point of the 'sprint', which is being trialled at three races this year and could be introduced at more in 2022 if it is deemed a success, was to enhance the entire weekend. A first judgement on that will not be possible until Sunday evening at the earliest.

This event, in front of 100,000 enthusiastic fans at a Silverstone bathing in gorgeous summer weather, was meant to be a trial, and F1 is planning research and surveys to establish reaction to it. The architect of the plan, though, felt he had already seen enough to justify its introduction on a permanent basis at more races next year.

F1 managing director Ross Brawn said he was "very pleased" by what he had seen.

"There was lots of action," Brawn said. "People are now understanding it's a complete weekend. We had a great day yesterday, we've had a great day today, and I'm sure we're going to have a great day tomorrow. So three days of action. And I don't believe we have diluted it at any stage; we've only added to to it.

"We will go away and review everything, take some time, talk to the teams and drivers, discuss it with the FIA and see if there are things we can polish, but I don't think we should change anything fundamentally. I think the concept is good.

"The terminology of the event is a little challenging. Some people call it sprint qualifying, some call it a sprint race, we need to tidy up things like that. There are things we need to evolve, but nothing major."

What did the drivers think? 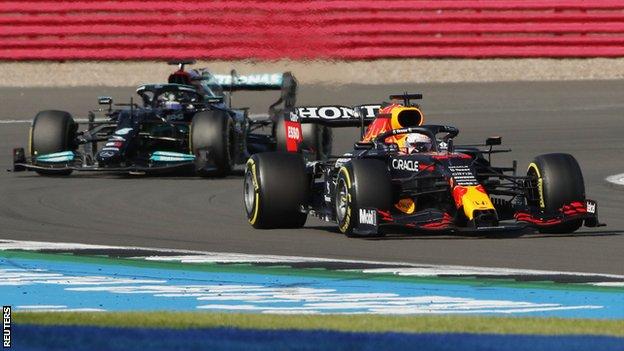 Fernando Alonso – the unquestioned star of the sprint after a quite brilliant first lap in which he vaulted from 11th on the grid to fifth with some spectacular overtaking moves – agreed with Brawn.

"I like the format," said the two-time champion, who held on to finish seventh in his Alpine. "We have action for three days, so it is good for the people."

Alonso's first lap – which included moves around the outside of Sergio Perez's Red Bull at Luffield and McLaren's Lando Norris at 190mph at Copse, and which he judged "one of the best of my career" – in many ways made the event. His Alpine is not a quick car this weekend, and a train formed behind him.

Norris and his McLaren team-mate Daniel Ricciardo made it past, but no-one else did. And in the battle behind him, Perez lost it at Becketts and spun, consigning him to a start at the back on Sunday.

Not everyone was so convinced, however. The winner, particularly.

"What was nice was in the beginning you start with lower fuel so the cars are faster and a bit more alive," Verstappen said. "So that was fun as opposed to a heavy car and just slow. I enjoyed that bit for sure.

"Friday didn't feel more enjoyable. It means something, but it is not the real hype of 'I put it on pole.' And when today they said, 'Great job – pole position…' But I did one-third of the race distance. And then hear I did pole. It is a bit odd."

Hamilton, too, sounded equivocal, although that could well have been due to the fact that he had lost pole position as a result of a slow start that allowed Verstappen to take the lead.

"Yesterday was a more enjoyable day because qualifying is great," he said. "It's very hard to follow in these cars so it wasn't the most exciting but hopefully the fans enjoyed it. I can't say I enjoyed it too much, but more races is good."

McLaren's Lando Norris said: "It's different, just a bit weird, preparing for a race on a Saturday where there's no points. That defeats a lot of what you're trying to achieve in a weekend. But every now and again something like this is good."

And did the fans like it? Well, for what it's worth, this writer did a brief poll on Twitter, and the results after 2,278 votes in half an hour were as follows:

You can see the responses on my Twitter feed,external-link should you be interested. They range from "absolutely loving it…" to "where is the 'failed gimmick' option?"

So, not exactly a definitive result from that, either.

Brawn is not a man for turning easily, so one suspects it is here to stay. And for Mercedes F1 boss Toto Wolff, that would be the right decision.

"Overall it is a good add-on," Wolff said. "I don't see it at every race – there is too much randomness. If you see Checo [Perez] spinning out, last is not the place he should be.

"It was a bit dull towards the end, but overall it has merit. If it is a kind of grand slam for a few races, it is good because you provide real entertainment on Friday, we are prime time on Friday night and prime time on Saturday.

"We can tweak the format, but fundamentally if we do four races like this I am pro."

What does it mean for the race? 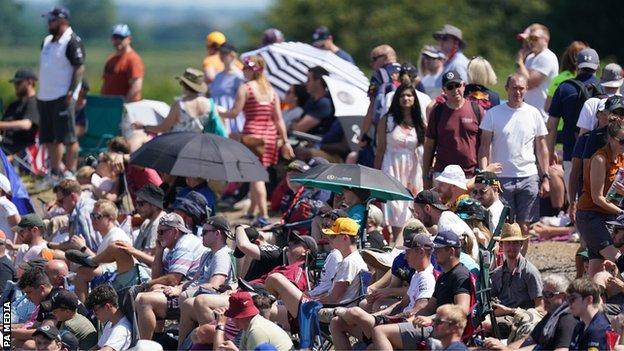 There was sweltering heat to endure for the fans watching on

Hamilton cut a somewhat dejected figure after the sprint. On Thursday he had said he needed to win both races this weekend, as he seeks to reduce Verstappen's already substantial championship lead.

Instead, he has already lost one further point, and what he saw of the Red Bull from behind it on Saturday has not filled him with confidence for the race, which 140,000 fans will attend, making it by far the largest organised sporting crowd in the UK since the start of the pandemic.

"They were just too fast," Hamilton said. "I think he had a lot of pace in him today and I don't think he particularly had to push too hard.

"If I can try to keep up with him on the straights, maybe we can apply pressure on strategy, but we are not going to be overtaking him on the track."

Verstappen, though, has his own concerns. The nature of the sprint event is that teams have only one practice session to fix on a race set-up before the cars are put into 'parc ferme' and their set-ups cannot be changed.

Red Bull have gone for a higher downforce set-up than Mercedes, and while this has made them quicker in the corners, it means they are slower on the straights. If he had his time again, Verstappen said, he would have run less wing.

"What we learned is that it is very close again," Verstappen said. "It seems we are quick through corners and they are quick on the straight this weekend. And the after one practice and you don't get it right, you are a bit stuck.

"The pace was all right, but with a pit stop coming into play – or two pit stops, who knows? – it is again going to be a good fight."

Hamilton said: "Naturally it's not been the best day for us but we have given it everything. The race will be tough but the support of the fans, just the parade lap just there, the roar of the crowd is magnificent.

"I will recharge tonight and come back stronger tomorrow. There are things we can learn and I will be giving it everything and hope we can have a closer race than we did today." 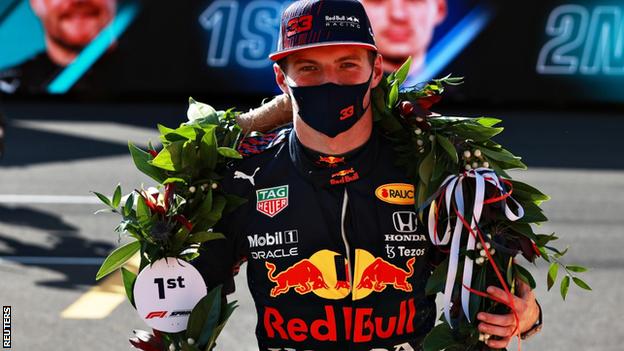 Instead of a Pirelli pole position tyre award, Verstappen was presented with a winner's wreath instead 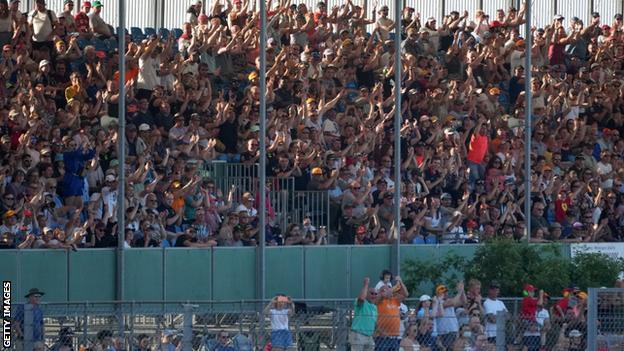 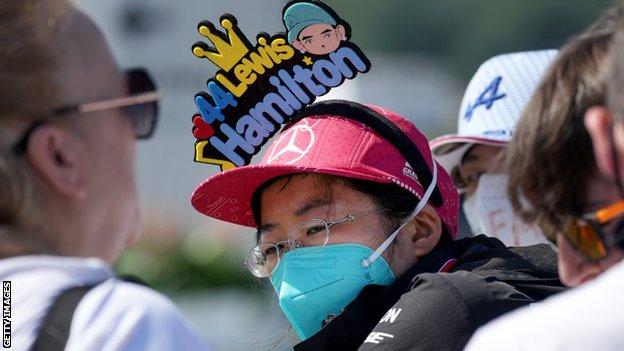