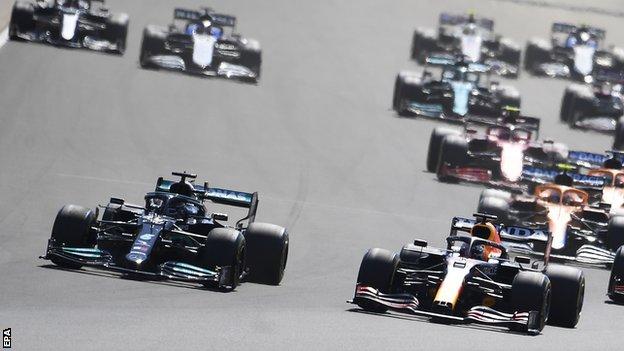 Max Verstappen has accused Lewis Hamilton of being "disrespectful" and "unsportsmanlike" following their collision in the British Grand Prix.

The Red Bull driver was taken to hospital for precautionary checks after suffering an impact of 51G in the first-lap crash.

"Very disappointed to be taken out like this," Verstappen said.

"Watching the celebrations while still in hospital is disrespectful and unsportsmanlike… but we move on."

Verstappen later confirmed he had been released from hospital.

The 23-year-old Dutchman posted a picture of himself with his father Jos in Coventry Hospitalexternal-link alongside the caption: "Cleared from the hospital after all the checks were ok. Thank you to everyone for all the nice messages and best wishes."

A Red Bull statement added:external-link "We are pleased to confirm that Max was released from hospital at 22:00 [BST] this evening, following a thorough medical examination, without any major injuries."

Hamilton was given a 10-second penalty for the incident, which dropped him to fourth place after his pit stop, but the Briton fought back to overtake Ferrari's Charles Leclerc to win a dramatic race.

Verstappen said in his earlier Twitter post: "The penalty given does not help us and doesn't do justice to the dangerous move Lewis made on track."

Speaking after the race, Hamilton said: "I was pretty far alongside him, but I could see he wasn't going to back out. But then we went into the corner and we collided.

"Of course that's never the way I want to win a race or just in general to race, but these things do happen."

In a tweet posted later on Sunday,external-link Hamilton added: "Today is a reminder of the dangers in this sport. I send my best wishes to Max who is an incredible competitor. I'm glad to hear he is ok. I will always race hard but always fairly."

The incident happened at Copse corner, which is taken at 190mph in a Formula 1 car. Hamilton overtook two other drivers there during the race, including the move that claimed the lead from Leclerc.

Red Bull team principal Christian Horner said Hamilton's move was "an amateur mistake, a desperate mistake", adding: "It is disappointing and annoying; his actions have jeopardised another driver's safety."

Horner added: "Putting a fellow driver in hospital and writing off a car and receiving a menial penalty and winning a grand prix doesn't feel like much of a penalty.

"To stick a wheel up the inside at Copse corner, one of the fastest corners anywhere, there is only ever going to be one consequence of that.

"We are just lucky someone wasn't seriously hurt. Thankfully we got away with it."

And Red Bull motorsport adviser Helmut Marko said: "Such dangerous and reckless behaviour should be punished with a suspension or something."

But Mercedes F1 boss Toto Wolff responded: "It is a situation we all have seen in the past when great drivers race with each other. When nobody is prepared to give in, these kinds of situations can happen. But it takes two to tango."

The British Grand Prix stewards judged Hamilton to be "predominantly at fault". They said Hamilton went into the corner "slightly behind and on the inside", saying that he was "on a line that did not reach the apex of the corner, with room available to the inside".

Hamilton, who won the British Grand Prix for an eighth time to move eight points behind Verstappen in the current drivers' standings, declined to comment on Horner's criticisms.

But he said: "It is important for all of us to take a step back. I am sure emotions are running high there and I know what it's like to lose points and be in that position."

Hamilton also rejected claims he should apologise for the incident in the context of being penalised.

"I don't think I am in a position to have to apologise for anything," added the seven-time world champion. "We are out there racing.

"There will be a lot of tough races coming up. We have to learn to strike a decent balance.

"I don't agree with the stewards, but I take the penalty on the chin and get on with my job. Everyone is going to have a different opinion and I don't particularly care what people think, I just do what I do."