Brooke Henderson claimed her 10th victory on the LPGA Tour with a four-under-par 67 in her final round to overhaul Jessica Korda and Jin Young Ko; the Canadian has now captured at least one win in six of the last seven seasons 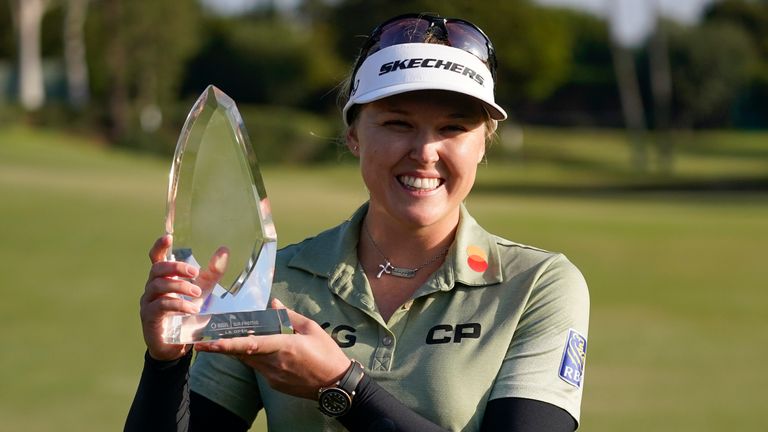 Korda held a one-shot lead over Ko heading into the final round after setting the 36-hole scoring record at Wilshire Country Club.

But three bogeys derailed Korda’s title hopes as Henderson shot a four-under-par 67 to claim her 10th victory on the LPGA Tour.

Henderson finished with six birdies against two bogeys for her first victory since 2019 in just her third appearance at the LA Open, with Ko finishing two shots behind.

“I definitely am a firm believer when you’re in the winner’s circle, you’re getting a lot of breaks and it’s sort of meant to be,” Henderson said.

“Today I was making a lot of birdies, and I think probably the biggest break was 12, that chip-in.

“Sometimes it’s just missing a divot, or today I had tons of opportunity where the people I was playing with showed me the line on putts.

“They were always just a little bit behind me so I always had a read on every green. That just only happens when it’s meant to be.”

Henderson won $225,000 for her victory. Hannah Green and Ko finished tied for third at 14 under. So Yeon Ryu and Angela Stanford finished in a tie for fifth at 12 under.

Korda finished alone in second at 15 under.

“Really frustrating, really couldn’t get anything going,” Korda said. “I was hitting it really good and then just it wasn’t happening for me for some reason.

“Just kept getting screwed and the wind kept dropping and then coming back up and it just wasn’t happening. I don’t know. I couldn’t make anything happen today. I tried.”

Henderson has captured at least one win in six of the last seven seasons; she did not win in 2020.

European Tour: Francesco Laporta misses out on historic ’59 round’ at Canary Islands Championship