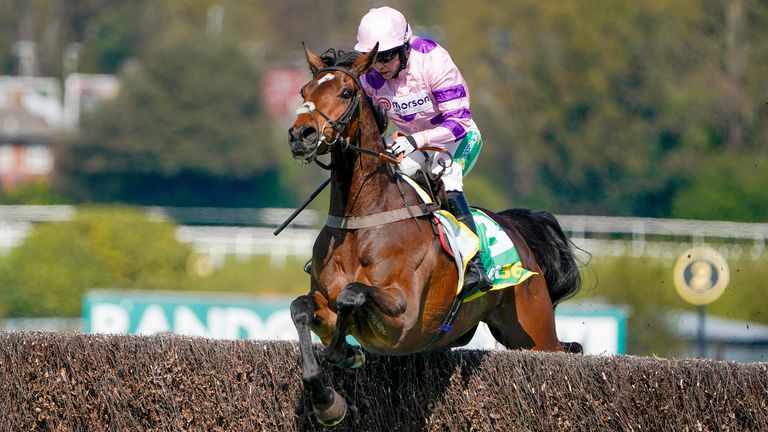 Greaneteen lowered the colours of Altior with a stylish success in the bet365 Celebration Chase at Sandown.

Not beaten far into fourth in the Champion Chase at Cheltenham, the seven-year-old showed he will be a real force to be reckoned with next season as he displayed a very smart turn of foot.

Nico de Boinville adopted different tactics on 9-4 favourite Altior, who was wearing first-time cheekpieces. He shot into an early lead and on the way round put in some spectacular leaps.

Approaching the Pond Fence, though, Greaneteen and Sceau Royal both closed in to challenge and when De Boinville drifted off the rail, Bryony Frost did not need asking twice to take the invitation on Greaneteen.

Just 35 minutes after partnering Frodon to victory in the Oaksey Chase, Frost was full of confidence on the 13-2 shot who scampered clear.

Just like a true champion, Altior stuck to his task and was closing again at the line, but he was unable to match Paul Nicholls’ charge for speed at a crucial period of the race and went down by three and three-quarter lengths.

Nicholls said: “He ran very well in the Tingle Creek here behind Politologue when the ground was soft enough and he was too free in the Game Spirit, but he’s now starting to relax.

“Today Bryony realised what Nico was doing and she had the sense to follow Altior. It was a great move by her getting a lead into the straight.

“I’m not in a mad hurry to go over two and a half miles with him and his target will be back here for the Tingle Creek.”

Frost said: “I said coming in the car I hoped it was going to be a good day for us and thankfully it really has been.

“Altior looked to be on a going day and that he wouldn’t be coming back to us in a hurry, so I allowed the gap to reduce coming down the hill.

“This horse has one chink in his armour in that he can be a bit too keen, but he’s learning to settle and I have a 100 per cent strike-rate on him from winning a novice hurdle on him to winning the Celebration Chase today.

“The season has had its brilliant highs and serious lows, but I’ve ended up on the 47-winner mark which is close to matching my best.”

Although beaten, Nicky Henderson was delighted to see Altior run with much more zest, on his first start since a lacklustre outing Christmas.

He said: “It’s a long time since he’s had a run and he just got a bit tired in the end, but he’s done nothing wrong at all and really enjoyed himself.

“I think he still has that old spark. All things are up for discussion.

“We were all set for Cheltenham, then came that nasty tracheal wash and it was a rush to get him here, but as you could see he still jumps and can still go a rare old gallop.”

When asked if Altior would return next season, Henderson said: “I see no reason why not.”