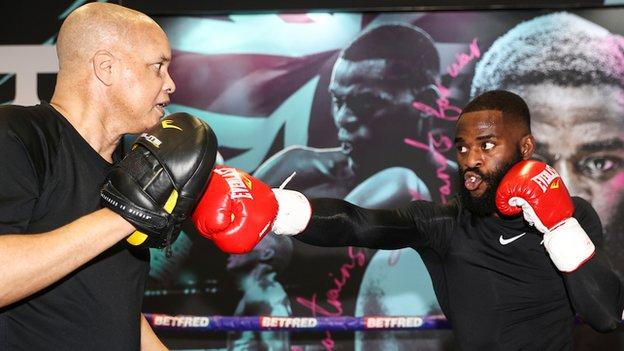 Buatsi has 13 wins from 13 fights as a professional

Joshua Buatsi says he can take confidence from responding to adversity in his last fight when he faces Daniel Blenda Dos Santos on Saturday.

The British light-heavyweight, 28, fights for the first time since suffering an eye injury in his October win over Croatia's Marko Calic.

He believes the challenge faced in securing the seventh-round stoppage win offered him a useful "gut check".

The 2016 Olympic bronze medallist added: "I thought and knew it was there but I had never been tested. It was good to say, 'cool, I showed up for it'.

"It was a wake-up call or a gut check or a fight to put me in a situation I had never been in. How are you going to react? For me it was answering questions to myself which is quite important."

Saturday's bout, which will be broadcast on BBC Radio 5 Live Sports Extra, will see Buatsi compete for the first time since joining forces with decorated American trainer Virgil Hunter.

"I think he's a major talent," said Hunter, who has previously trained the likes of Amir Khan and Andre Ward.

"I think he has a tremendous upside. I'm hoping I can do everything to cultivate that and turn him into a world champion."

Buatsi has 13 wins from as many outings, while Frenchman Dos Santos has 15 wins from 15 fights.

Dos Santos, 30, is a former French soldier who has also served time in prison.external-link

"Thank God I had the opportunity to leave prison, make a real change in my life and become a professional fighter," said Dos Santos. "I changed 100% of my life, my city, everything, now all this work and dedication I'm in this place right now. I have to enjoy the moment."