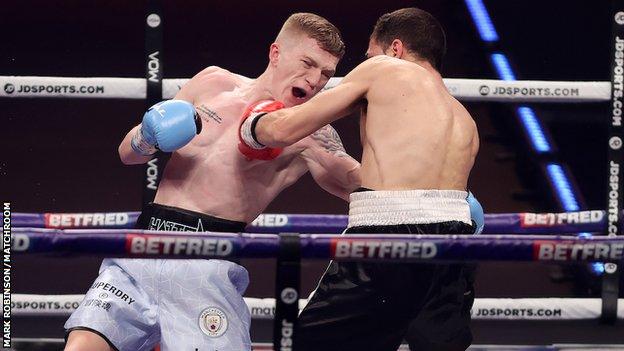 Campbell Hatton landed a straightforward debut win over Jesus Ruiz 24 years on from his father Ricky Hatton's first bout as a professional.

The 20-year-old won all four rounds in Gibraltar against a Spanish opponent who is now winless in 11 outings.

Campbell, boxing at lightweight, showed an affinity for throwing body shots – the punch his father delivered so consistently during his career.

"I don't think I boxed my best, I can do better," said Hatton.

"As much as I tried not to, the nerves got to me a bit. I can only do better next time.

"I've always boxed just like that, the toughness is different. We knew he'd be durable, I was surprised how durable he was. I'm very happy with it.

"I have a lot of the same strengths as my dad. One is the body punches, that's a big part of my game."

Ricky Hatton, who was ringside, watched his son walk to the ring to the tune of 'Blue Moon', just as he did for some of the biggest fights in British boxing in recent decades before his final bout in 2012.

Upon Campbell Hatton's arrival in the ring, the fans present at the Europa Point Sports Complex sang 'Walking in a Hatton Wonderland', just as thousands did in following his father to Las Vegas to face the likes of Floyd Mayweather and Manny Pacquiao.

Referencing the face mask he had to wear at ringside, former two-weight world champion Ricky Hatton said: "I knew these masks would come in handy because nobody could see me crying.

"It was a very proud night for me and for the family. It was a good learning fight for him. We saw what he was capable of in flashes."

Promoter Eddie Hearn said Campbell Hatton is likely to next box on the undercard of Derek Chisora's heavyweight bout against Joseph Parker on 1 May. 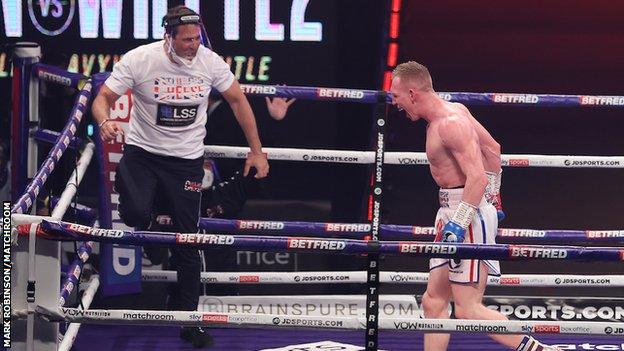 Elsewhere on the card, Ted Cheeseman won the British light-middleweight title for a second time, knocking out Liverpool's James Metcalf in the 11th round of an enthralling contest.

Cheeseman, who opened up to BBC Sport about battling gambling addiction last year, lost the title in 2019.

But in battling Metcalf for the vacant belt, he enjoyed a dominant fourth round and appeared close to victory, only for his rival to recover and apply heavy pressure of his own in the seventh.

But in the 11th, a crisp right hand-left hook combination floored Metcalf and the bout was waved off while Cheeseman celebrated wildly.

"Everyone says 'he's done too many hard fights, it's taken the mileage out of him'. I could have done 15 rounds. I stepped on the gas in the championship rounds and took him out of here."