Carl Frampton on the big nights behind and what's coming next

Two-weight world champion Carl Frampton says he is "happy sitting around doing nothing" a fortnight after retiring from the sport.

The 34-year-old from Belfast hung up his gloves seconds after the WBO super-featherweight defeat by Jamel Herring.

"I've been ready to retire for quite a while, I'm kind of relieved it's over and I'm at ease with it – I can focus on family life now," said Frampton.

"People worry if they're going to miss that buzz – I won't."

He added: "Boxing's like a 24/7 job – you have a fight, you win hopefully but even on your holidays you're thinking about your next fight, thinking about how much you can eat and how much weight you are going to put on.

Frampton was stopped for the first time in a 31-fight professional career when he lost to American Herring in his bid to become Ireland's first three-weight world champion.

Before the fight Frampton said he would retire if he was beaten by Herring but he has revealed that it was always going to be the finale of a wonderful boxing career. 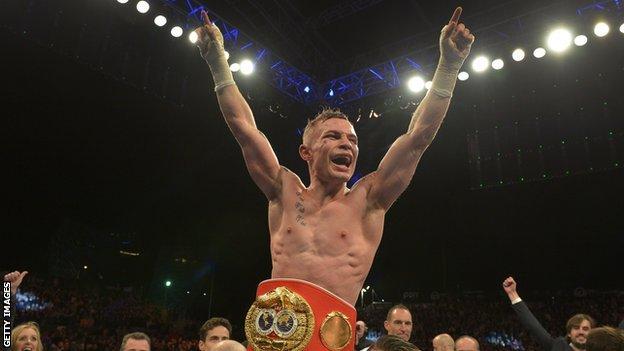 Frampton celebrates winning the IBF super-bantamweight title in front of 18,000 fans in Belfast seven years ago

"I knew going into the fight – win, lose or draw – I was going to retire. People were talking about a big one in the summer at Windsor Park if I had beaten Herring but I was calling it a day after it.

"I suppose that's the small percentages that get you to the top and I don't have it any more."

Frampton will miss the camaraderie of boxing but he is now looking to the future with family walks, five-a-side football, learning a new language and taking a cooking course on the to-do list.

A career in politics is ruled out but it's a thumbs-up for the jungle life of I'm a Celebrity… Get Me Out of Here! if reality TV comes calling.

Staying in the game

There could also be a continued connection with boxing, while discussions on setting up a family foundation have started.

"I'm excited for the future and I'm not worried about what's to come next," added Frampton.

"We're in the early stages of talking about a foundation. I want to give back a wee bit to Belfast and Northern Ireland, to help people who have supported me in so many ways and give kids opportunities.

"I'll never train professional fighters because it takes up too much time. I would always give advice to anybody – if I was going to train I'd maybe get involved in amateur training.

"I don't think this is the end of me – it's just a new chapter in my life. I'm happy sitting around doing nothing. Being with my family and the simplest things please me really."

There's now time for Frampton to reflect on those landmark fights, with a huge support cheering him on to world titles and a prime place in Northern Ireland sporting history.

They include the 2014 hometown win over Kiko Martinez to secure a first world title, a Manchester success against Scott Quigg and two epic contests with Leo Santa Cruz in the US.

"I'm very proud of what I've done – I've done more than I ever imagined I could have. I worked hard and I was determined. I always had goals I wanted to achieve. I just had a firm belief in myself.

"I'd like to say thank you to the fans. I'll never forget the support and fan base I had and it's one of my proudest achievements.

"I brought 5,000 people to Las Vegas to watch me fight Leo Santa Cruz. It was January, just after Christmas when there's not a lot of money around.

"That's a huge achievement and something I'm very proud of – not too many fighters from the UK and Ireland in recent years would have been able to do that and I was only a featherweight, not a big guy. It's all been appreciated.

"If people see me as one of the lads or someone who never forgot where he came from, then that's a win for me."