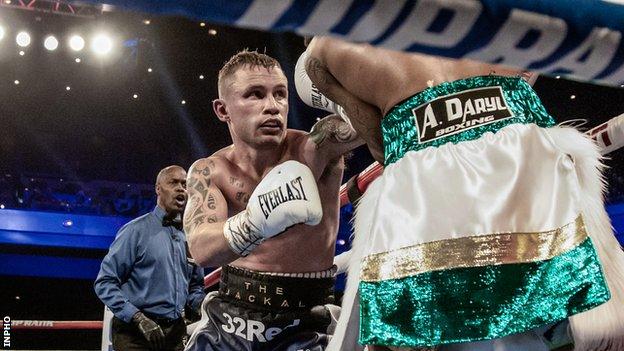 "I remember seeing Herring in the ring with Carl in New York after the Santa Cruz fight [in 2016] and he looked the two weights above Carl, but Carl has the experience and the knowledge."

Hatton added: "How many times do you think that fighters have had better days, and then they come back and put on the performance of their life?

"Maybe a lot of people will see Herring as being more fresh, and maybe Carl has probably had slightly better days.

'I will retire if I lose, but that's not going to happen' – Frampton

"Obviously he's lost to Josh Warrington, but no – I think he might just have one more round in him.

Frampton's current trainer is former British and Commonwealth champion Jamie Moore, who Hatton believes is "solid gold – one of the best".

The retired two-weight world champion added that Moore's strong faith in Frampton makes him think "he's got half a chance".

"If he didn't think Carl had a chance of winning this fight, he would tell him now, because let's have it right – what more does Carl need to achieve?

"He's made his money; he's made his legacy and he's said he's got the right man in the corner in Jamie Moore."

Potential history in the making

If Frampton beats Herring, he will make Irish boxing history having previously held world titles at super-bantamweight and featherweight.

Despite Hatton's concerns that fans may view Herring as being "more fresh", he is one year older than Frampton, but has less experience in the professional ranks.

Both fighters have two losses on their records. Of Frampton's 28 wins, 16 have been by knockout.