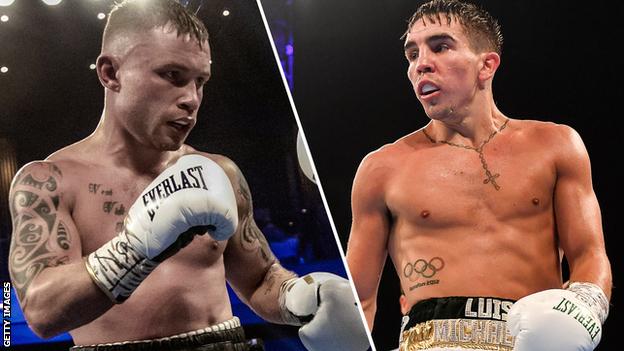 Carl Frampton will secure his status as the greatest fighter Ireland has ever produced if he beats Jamel Herring in Dubai, says Michael Conlan.

"Best Irish fighter there has ever been if he becomes the three-weight world champion. No-one has done it before."

Frampton will finally take on American fighter Herring, 35, on Saturday with the behind-closed-doors fight having originally been scheduled to take place in the middle of 2020 only for plans to be scuppered by the Covid-19 outbreak.

Frampton, 34, stopped Darren Traynor in an interim fight in August, while Herring overcame Jonathan Oquendo after a disqualification in Las Vegas the following month.

Frampton's rescheduled world title fight with Herring will take place on 3 April in DubaiJamel Herring: A father, a Marine and a legacy – The man fighting for his dream against FramptonConlan to return to ring against Ionut Baluta in London on 30 April

Belfast man Frampton became world champion at super-bantamweight in September 2014 when he defeated Kiko Martinez at the Titanic Quarter and became a two-weight world champion in the first of two featherweight encounters with Leo Santa Cruz in the USA in 2016.

The Frampton-Herring bout was rescheduled for 27 February, but was pushed back because of Frampton's hand injury.

"Carl is a big inspiration for every boxer," added Conlan, who will make his debut at super-bantamweight against Romania's Ionut Baluta in London on 30 April.

"He brought pro boxing back to Belfast. He made pro boxing in Belfast, he relit that fire again and look at it now, it's booming, so every fighter needs to be thankful for someone like him and be supporting him in his bid to become the best fighter there's ever been in this country."

Herring possesses a significant size advantage over Frampton but Conlan feels that may work in the Northern Irishman's favour.

The American has won 22 of his 24 professional bouts and has twice defended his super-featherweight title, but Conlan does not think he has faced someone "as talented" as Frampton.

"Herring's had big events like the Olympics and his world title fights but nothing like the magnitude of this fight," said Conlan, 29.

"Experience is massive in this game, especially when you're going up against a more skilled, experienced guy. It's going to be very tough for him in there. There are questions that Carl will ask that he hasn't seen before. I don't think he's faced someone as talented as Carl.

"It's a hard fight either way but I think Carl's talent and ability, if he has enough in the tank, will see him through. I think Frampton edges him on points."

Conlan added: "It's a fantastic match-up, a crossroads fight for both guys. I think whoever loses does call it a day. Herring's a bigger guy, Frampton's the smaller guy, Herring's probably the stronger guy but Frampton's the more talented guy.

"It just depends who has more or less in the tank. They're both great fighters, Herring's a southpaw, how is Carl going to deal with that big, tall southpaw – he's never faced someone that size.

"There are a lot of boxes that will need to be ticked in the fight but it's a really interesting one."