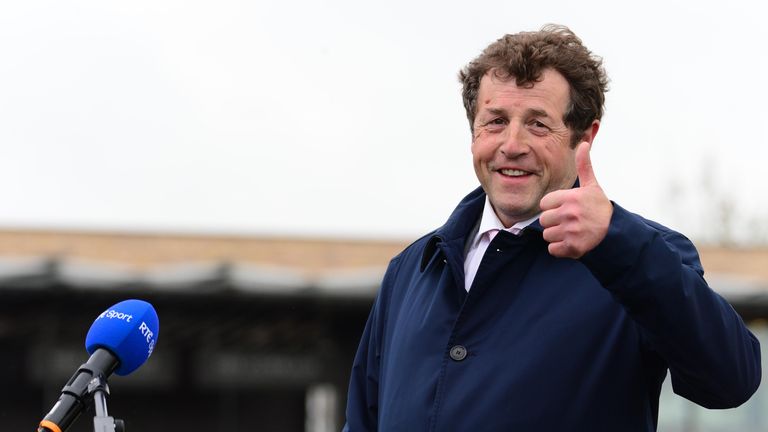 Ado McGuinness is eyeing the Irish Lincolnshire as the springboard to a lucrative season for his new recruit Casanova.

The five-year-old made his debut for McGuinness’ Lusk stable in January, finishing third in a seven-furlong Dundalk handicap on his first start after leaving John Gosden’s powerhouse Newmarket operation.

The new turf Flat season begins at the Curragh on Sunday, and Casanova is all set for the valuable Paddy Power-sponsored feature handicap.

McGuinness said: “We’re happy with him – we were very happy with his run at Dundalk, and we just decided to keep him for the Lincoln then.

“He’s had a couple of bits of work on grass and I think if the horse settles, he’ll run a big race – he is inclined to pull hard in his races.”

Casanova is drawn 17th of 24 runners, something the trainer does not think will hamper his chances over the one-mile trip.

“It’s not ideal, but I don’t think it’s as bad over the mile as it would be over the sprints,” he said.

“I don’t think it’ll have that much effect, because he’ll be running into the elbow, so I think he’ll be fine.”

McGuinness has a number of other future handicaps in his sights for Casanova, with a trip back across the Irish Sea to England a possibility at some stage.

“We had him in the the English Lincoln, but I don’t think he’ll be high enough to get in,” he added.

“He’ll target all the premier handicaps in Ireland, which are worth a good bit of money – the likes of the Galway Festival, Guineas weekend.

“We’ll target all those good races with him, and see if we can pick one of them up.

“There’s the likes of the Galway Mile – and maybe, if he goes up a few pounds, he could travel to England for one of the big handicaps.

“They’re worth a good bit of money at home, though, so we tend to keep a lot of our horses here.

“Long-term plan, Galway, that would be a big aim for him.”

A gelded son of Frankel, Casanova won both a maiden and a handicap before McGuinness acquired him for owners Dooley Thoroughbreds for 15,000 guine as.

“He wasn’t overly expensive – we thought he would have been a bit more expensive really,” he said.

“He has ability, he’s a little bit keen in his races, but he seems to be a lot more settled now than he was, so I’m very happy with him at the moment.”

Among Casanova’s rivals in a typically competitive renewal, Ken Condon runs Teed Up.

The Gleneagles gelding has a race record of three victories and three second places in six runs, but Condon believes he will need to improve this weekend.

“He seems to have the profile, but this is going to be very competitive – he’ll need to have improved from three to four,” said the Kildare trainer.

“Hopefully he has – but as I said it’s a competitive race, as you expect for a Lincoln – they always are.

The forecast testing ground is something Teed Up should cope with at least, because much of his best form has come in similar conditions.

“It’s always a test, and he’s handled it previously there a few times in the autumn,” added Condon.

“So that’ll be a help – because they’ll need to handle the conditions.

“Hopefully he’s improved. He’ll need to – he’s up a little bit in the weights, and it’s very competitive.

Sheila Lavery’s Quizical will also appreciate conditions, with any further softening in the ground welcomed by his trainer.

“He’s won at the Curragh, so we know he runs well there,” she said.

“The big thing with Quizical is the ground, he’s very ground-dependent, and this ground should suit him.

“There might be a couple of showers, which would be to my benefit because it might loosen it up.

“He’s where I’d want him to be, going into his first race, so fingers crossed.”

Like Casanova, Quizical – winner of the Pat Smullen Champions Race For Cancer Trials Ireland under Sir Anthony McCoy in 2019 – was also entered in the Lincoln at Doncaster next week, but that engagement was vetoed because of the more suitable going at the Curragh.

“We had him in at Doncaster as well – but as the ground at the Curragh seems to suit him, we’ll run him there,” Lavery explained.