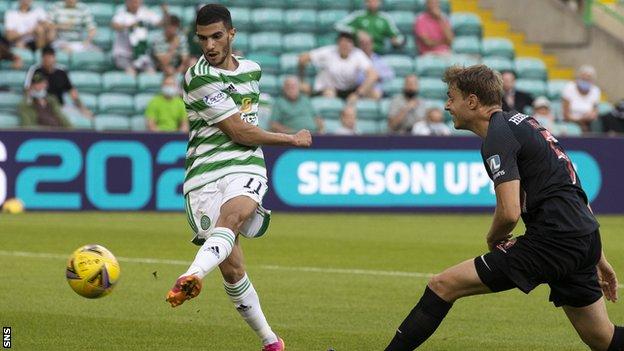 Liel Abada's debut goal had Celtic ahead at the break

Ange Postecoglou's Celtic tenure began with a breathless draw with Midtjylland in a Champions League qualifier that saw both sides reduced to 10 men.

Bitton reacted angrily to simulation from Anders Dreyer, who repeated the offence to also earn a second yellow.

Evander curled a free-kick into the top corner to leave the tie in the balance.

The return leg takes place next Wednesday in Denmark, with the winners progressing to face PSV Eindhoven or Galatasaray in the third qualifying round.

Reaction & as it happened

Manager Postecoglou received a warm welcome from the 9,000 crowd as Celtic played a competitive home game in front of fans for the first time in 16 months.

With a depleted squad and the Australian still adjusting to his new role, Celtic needed calm heads as they attempted to edge closer to a first Champions League group-stage appearance since 2017-18.

Israel's Bitton, 29, was by far the most experienced member of a makeshift backline, only to let his team-mates down when they had wrested control after a disjointed start.

Bitton's countryman, 19-year-old Abada, had lit up the occasion before his lively debut on the right flank was cut short.

After Odsonne Edouard sent a snap-shot narrowly over the crossbar, Ababa's two precise deliveries to Ryan Christie resulted in the Scotland midfielder stabbing a shot against a post then sending a flying header too high.

Both players were again involved as the opening goal of the Postecoglou era arrived in the 39th minute. Christie's angled strike from the left was parried by goalkeeper Jonas Lossl and Abada pounced to tuck in an awkward finish.

Celtic were a goal up and looking good – then Bitton had a rush of blood to the head. Dreyer tumbled under his challenge in the hope of winning a penalty, prompting the Celtic player – booked for an earlier foul – to poke a finger in the winger's face and earn a second yellow.

Abada was sacrificed, with 18-year-old defender Dane Murray coming on for a debut – partnering 21-year-old Stephen Welsh at centre-back – and the complexion of the tie seemed to have altered drastically.

But Dreyer was dismissed shortly after the interval for a tumble under pressure from Welsh, and captain Callum McGregor thundered a shot off the crossbar as Celtic tried to immediately capitalise.

But the hosts failed to heed the warning and the Danes, who hadn't created a clear-cut chance, were level when Evander whipped a free-kick from the left into the top corner, with goalkeeper Vasilis Barkas looking suspect.

Celtic seemed more likely to grab a winner, with Christie firing off target and substitute Tom Rogic having an effort saved, but the game petered out to a frustrating draw for the Scottish side.

Man of the match – Ryan Christie 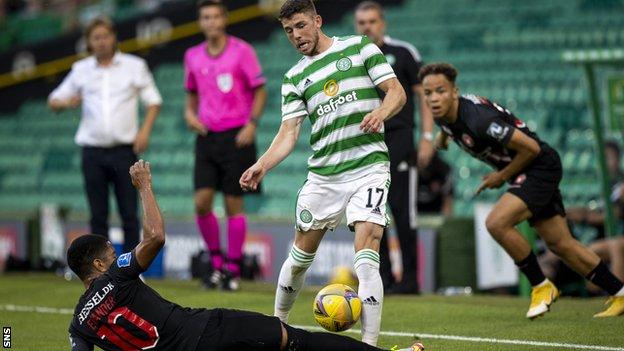 What did we learn?

The early signs of Postecoglou's philosophy were apparent as Celtic, despite their inexperience in defence, built from the back and tried to play at a high tempo. Teenage defender Murray can be proud of his performance having been thrown in at the Champions League deep end.

However, the individual calamities that blighted Celtic last season again came to the fore. Bitton's needless red card had echoes of his Old Firm derby dismissal in January, while the reinstated Barkas wasted a chance to nail down the number one spot and continues to underwhelm as a £4.5m signing.

While an opening victory eluded him, Postecoglou will have seen little to worry him in Denmark. Midtjylland, who sold star midfielder Frank Onyeka to Brentford earlier in the day, are a functional team but lacking in quality.

What did they say?

Celtic manager Ange Postecoglou: "I don't think we will ever be as badly prepared as we were tonight going into such an important game and that's on me. I haven't done a great job so far because with the disruptions we've had, we haven't been able to bring the players in.

"The players didn't look for excuses. They put in a solid shift and I'm just disappointed they didn't get the rewards for what I thought was an outstanding performance."

The sides go again in the second leg in Denmark on 28 July (18:45 BST), and Celtic begin their Premiership season three days later away to Hearts (20:00 BST).