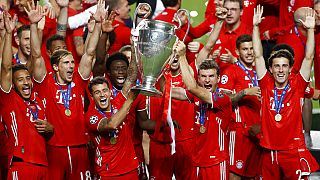 The contest will be a repeat of the 2020 final, which saw the Germans triumph 1-0 thanks to a strike by Frenchman Kingsley Coman.

Jürgen Klopp’s side, who are struggling this season domestically, will be hoping for revenge the Spanish side’s 3-1 victory in 2018.

The clash between Manchester City and Borussia Dortmund could see English star Jadon Sancho return to face his former club.