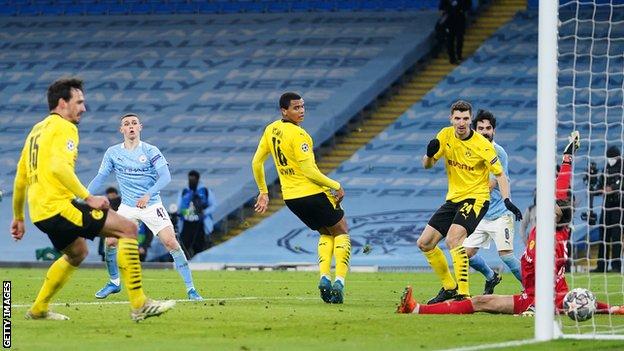 Pep Guardiola says he will be viewed as a failure as Manchester City boss if he does not win the Champions League during his time at the club.

City take a 2-1 aggregate lead to Borussia Dortmund for the second leg of their quarter-final tie on Wednesday.

They have not reached the semi-finals under Guardiola, going out in the last eight for the last three seasons.

City's preparations were hampered by a series of fireworks being let off outside the team hotel in the early hours of Wednesday morning.

On two occasions during the night explosions woke players and staff before a third attempt was prevented by the Blues' own security staff.

City's cause will be boosted by the absence of Dortmund's Jadon Sancho from the second leg, with the England and ex-City forward still recovering from the thigh injury that prevented him playing in the first leg.

However, the German side's away goal at the Etihad means they would advance with a 1-0 win on home soil and Guardiola is urging his side to focus on their plan rather than worry about the permutations.

"If you think of the consequences or goals you have to score or concede, you forget what you have to do," he said. "It doesn't matter what happens in the first leg, you have a chance in the second.

"Our idea is to go there do as best as possible and let them feel we are not going to defend what we got here. We want to impose our game to win the game."

The German side won 1-0 in the second leg in France on Tuesday, but lost on the away-goals rule after it finished 3-3 on aggregate following PSG's 3-2 win in the first leg.

'Maybe I will play the same team in Dortmund?'

City were beaten at home by 10-man Leeds on Saturday – only their fourth defeat of a season in which they are still competing on four fronts.

Guardiola made seven changes to his side for the loss, including resting in-form players such as Kevin de Bruyne, Riyad Mahrez, Phil Foden, Ruben Dias and Ilkay Gundogan to the bench.

"I made changes but maybe I will play the same team in Dortmund," added Guardiola.

"I've said many times they play because I want to let them play, not because I reserve these players.

"I select every team to win a specific game. If not, it would not be possible to arrive in the position that we we are in the Premier League and the other competitions.

"I decided on the selection and, with 29 games and 27 won, the rotation was exceptional, wasn't it?"

City's only injury concerns are striker Sergio Aguero and defender Aymeric Laporte, who has a hip problem.

With Sancho already ruled out, Dortmund are waiting on the fitness of Marco Reus and Mats Hummels for Wednesday's second leg.

Reus limped out of Saturday's 3-2 win at Stuttgart, after the attacking midfielder scored for the second match in a row, while centre-back Hummels did not come out for the second half after feeling unwell.

Dortmund have had an inconsistent season and sit fifth in the Bundesliga, seven points behind fourth-placed Eintracht Frankfurt.

Winning the Champions League this season is their most likely route back into the competition next campaign, which may be the only way they can keep all of their hugely talented crop of young players such as striker Erling Braut Haaland and England pair Sancho and Jude Bellingham.

"As a coach, it's my job to get the best out of him [Haaland], not to put a price tag on him," said Dortmund boss Edin Terzic.

"I have to get the best out of the team and want to advance to the next round."

On the tie itself, he added: "We want to perform and write an incredible history.

"It's difficult. We have to score a goal. One goal won't be enough if we concede. It's always important to finding the mix between courage and patience."

Dortmund only once overturned first-leg deficit

On the seven previous occasions Borussia Dortmund have lost the first leg of a Champions League knockout stage match, they've been eliminated six times. The exception was against Benfica in 2016-17 at the Last 16 stage (0-1 first leg, 4-0 second leg).In major European competition, Man City have progressed from 13 of their 15 knockout stage ties when winning the first leg, falling against Juventus in the 1976-77 UEFA Cup and against Monaco in the 2016-17 Champions League.In Champions League history, the side winning the first leg of a knockout stage tie 2-1 at home has been eliminated (15) more often than they've progressed (12).Borussia Dortmund's only previous home meeting with Manchester City ended in a 1-0 victory for the German side, in the Champions League group stages in December 2012.Borussia Dortmund have lost their last two home games against English sides in the Champions League (vs Spurs in both 2017-18 and 2018-19), having lost just one of their first seven such matches (W4 D2).Manchester City haven't conceded in any of their last four Champions League away games – the last team to keep a clean sheet in five straight away games in the competition was Manchester United (6 in 2010-11).After losing three of his first five meetings with Borussia Dortmund in all competitions, Man City boss Pep Guardiola is unbeaten in his last seven against the German side (W4 D3).Borussia Dortmund striker Erling Haaland has only failed to score in three of his 15 appearances in the UEFA Champions League, and has found the net in all four of his appearances at Signal Iduna Park (7 goals in total).A goal for Man City's Sergio Agüero will make him the outright highest goalscorer for a Premier League club in Champions League history (currently 36, level with Didier Drogba). The Argentine has scored more goals in the competition against German sides (11) than he has vs sides from any other nation.Man City's Kevin De Bruyne has been involved in 13 goals in his last 12 appearances in the Champions League (4 goals, 9 assists), with the Belgian having a hand in six goals in just four games this season (2 goals, 4 assists).

'City with 87% chance of progressing'

Simon Gleave, head of sports analysis, Nielsen's Gracenote: "Euro Club Indexexternal-link number one Manchester City are given 87% chance of reaching the Champions League semi-finals after winning the first leg of this tie 2-1.

"City's chance of winning the competition has increased to 36% but formidable opponents Bayern Munich or Paris St-Germain will await them at the semi-final stage if City successfully negotiate the second leg in Dortmund." 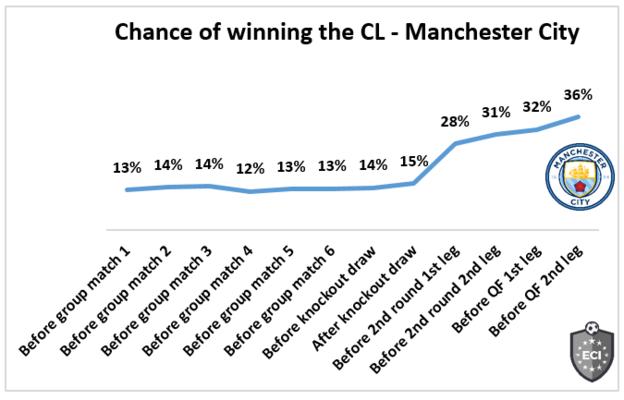