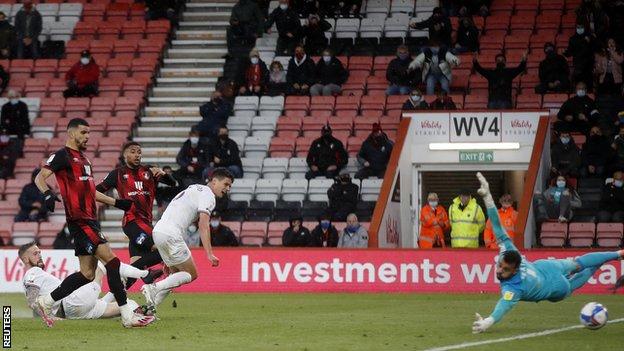 Bournemouth manager Jonathan Woodgate knows his side "still have it all to do" to overcome Brentford in the Championship play-off semi-final despite winning the first leg 1-0.

Arnaut Danjuma scored the only goal early in the second half in front of a crowd of around 2,000 home fans, but Brentford missed a glorious chance to level through Bryan Mbeumo.

"It's half-time, it's a slight advantage," Woodgate said after seeing Dutch winger Danjuma finish off a fine counter-attacking move from David Brooks' precise through ball.

The Cherries created the bulk of the chances in the first leg, but could have found themselves going into Saturday's return leg all square had Mbeumo not poked narrowly wide from six yards out with the goal gaping.

Emiliano Marcondes was also denied by a smart block from Asmir Begovic after coming off the bench.

Danjuma almost added a second goal late on for Bournemouth from a free-kick only for David Raya to palm it wide.

"I thought we created the better chances in the game and they had one towards the end, but we were outstanding on the counter-attack," Woodgate said.

"We were compact behind the ball and then broke at speed, at pace and we've got that in abundance with the players we've got.

"Those sort of finishes is what Arnaut does and, for me, it was never in doubt once he got in that position, he's so good at it."

The move that led to the goal began when Brentford centre-back Pontus Jansson lost the ball in an advanced position shortly after being booked.

Bournemouth pounced on the space he left at the back on the counter and Wales international Brooks played a deft through ball to Danjuma on the edge of the area, and the Dutch forward calmly finished into the bottom right corner for his 16th goal of the season.

'Returning fans were our 12th man'Relive Bournemouth's win over Brentford

Cherries cheered on to first-leg success 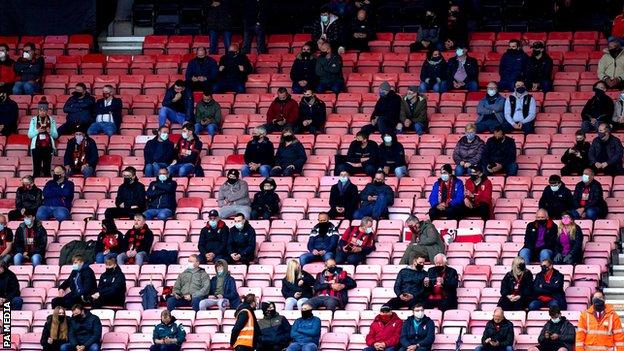 In what was one of the first sporting events to be allowed limited crowds back on the day coronavirus lockdown restrictions were eased across England, Bournemouth certainly responded to the noise and atmosphere their supporters were able to provide after a prolonged absence.

It was also the first time Woodgate took charge of a Bournemouth side in front of a crowd after he was appointed manager in February.

"The atmosphere was just unbelievable, it was electrical having them here," Woodgate said.

"It helped our players, they were constantly behind us, they liked the way we were playing and they fully bought in to how we were trying to play.

"But we're going to Brentford now and the shoe's on the other foot, and I'm sure their fans will be bang up for it."

Bournemouth also went close on the night when Jefferson Lerma fired an ambitious volley narrowly over the crossbar, Philip Billing skewed a shot wide from 12 yards out and Dominic Solanke hit the post with a downward header.

Steve Cook and Brooks were also denied in quick succession when Cook had his header from a corner saved low down by Raya and then Brooks' follow-up was blocked near the post by Ivan Toney.

Cook was forced off in the first half with a knee injury but Woodgate hopes his centre-back and captain will be fit for the second leg.

Brentford, who finished third in the regular season, tasted defeat for the first time in 13 games while sixth-placed Bournemouth found the perfect time to bounce back from three consecutive defeats.

"An even game I would say between two very good teams that both tried to get on top of the game throughout.

"I thought Bournemouth were slightly more dangerous than us in the first half without dominating.

"I thought we were the better side in the second half and we had our chances, and I felt a draw would've been the right result.

"But in a tight game, we know it's the small margins that will decide the game in a two-legged tie.

"We lost our structure and focus on their biggest threat, which was the counter-attack and we gave them the first goal from that, so we need to do better on that.

"It's a massive chance for Bryan after that and it doesn't get any bigger.

"But, this is just like we're going out in the second half and we're 1-0 down, so there's plenty of time still to turn this round. We'll be ready and come flying out 100%.

"We can use the experience from last year and we know it's going to be another tight game with small margins.

"There's still massive belief in the dressing room we can turn it around.