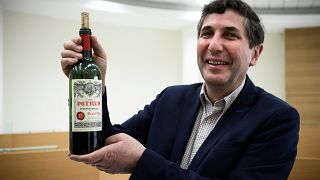 Viticulture in Bordeaux has been the focus of the region’s agriculture for centuries, and producers know very well how climate, altitude, aspect and other significant factors affect the character of the wines they sell. Moreover, winemakers have spent infinite time and money analysing techniques to find the perfect expression of their grapes in a glass.

But on Wednesday, they found out what happens when wine goes to that final frontier: Space.

Space-aged wine returning to earth for expert tastingSpace case: why are 12 bottles of Bordeaux on the International Space Station?

And it’s not just any wine that spent a year in space. Château Pétrus is one of the most celebrated, and expensive wines in the world. The area of production is Pomerol, which nestles next to St. Emilion on the right bank of Bordeaux. Wines from there have no classifications but make no mistake, Petrus is a big hitter.

“It’s not just any bottle that was sent up to the ISS, it’s a bottle of Château Pétrus 2000,” says Philippe Darriet, Head oenologist and President at ISVV Bordeaux.

The results were made public on Wednesday when the Space Cargo Unlimited start-up, in partnership with ISVV (Science Institute of Vine and Wine), announced that the 12 bottles and 320 vine shoots had come back to Earth tasting, smelling and looking different compared to bottles that remained on the ground.

As if spending a year in space isn’t enough to make this a special vintage, Philippe Darriet, Head oenologist and President at ISVV Bordeaux, reveals the wine is incredibly exclusive at 5,000 euros a bottle.

Swirl, sniff and slurp – can the experts spot the difference? 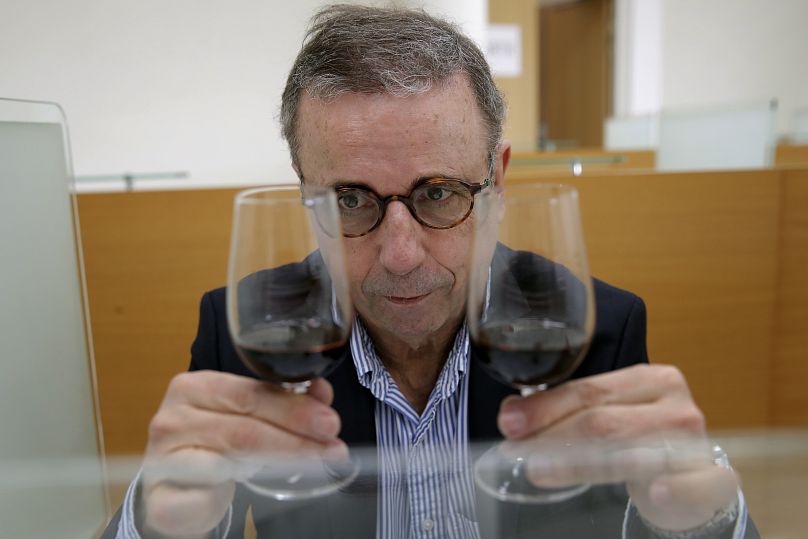 Bordeaux Mayor Pierre Hurmic checks glasses of wine, during a tasting session, with one glass containing wine that spent a year orbiting the world in the ISSChristophe Ena/AP

“It wasn’t easy to define, I am not sure I got it right. I am being honest. It was difficult,” he says.

When you decant a wine, swirl it in your glass or suck it into your mouth to make those noises that many people gawk at in restaurants, you are speeding up the oxidisation of the wine. You are in effect, opening it up by instigating a chemical reaction.

“Under normal conditions on Earth, on the ground, we have a limited supply of oxygen, but we have always convection and this convection works in a way that it’s mixing around the oxygen. So it’s almost all the time the same oxygen concentration. And this gives them ways to all kinds of chemical reactions, which result in aging, which results in oxidization, oxidizing substances which change the taste.”

In space, without gravity, that convection doesn’t happen.

How can this improve winemaking on Earth?

Preliminary results from the tasting released on Wednesday (March 24) show differences in colour, taste and aroma between the space wine and the Earth wine.

But this experiment isn’t just about the finished bottles – the space cargo also included vines.

The vine snippets — known as canes in the grape-growing world — not only all survived the journey but also grew faster than vines on earth, despite limited light and water.

“One of the things which surprised us a lot is that all the canes survived. But what happened, in addition, is that these canes which came back are growing much, much faster than the controls,” says Lebert.

Some of the vines started flowering just three to four weeks after returning to Earth.

Scientists plan to carry out more tests to determine how they changed during their zero-gravity journey. And a big test for them will be resilience. Winemakers lose crops all the time due to rot and mildew. Could these be things of the past soon?

“What we are hoping for is that the plants the came back (from ISS) might have acquired trademarks, different characteristics (from Earth vines), that is the objective of our research,” says Stephanie Cluzet, Head of Vine Researcher at ISVV. 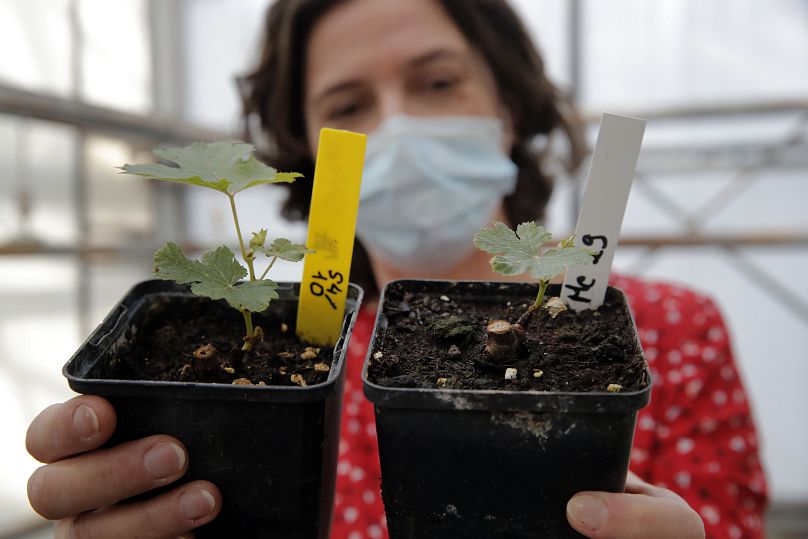 Stephanie Cluzet, Head of Vine Researcher Institute for Wine and Vine Research (ISVV) holds up a snippet of grapevines, left, that spent a year orbiting the worldChristophe Ena/AP

“We will now challenge these plants with, for example, diseases such as vine mildew that poses a lot of problems. We will certainly also do tests for grapevine phylloxera, that is also a major problem for vines. And we will certainly look for a possible modification of its moisture capacity with a view of having a more resilient plant during droughts.”

Understanding how plants develop outside of the Earth’s atmosphere could pave the way for vine-growing and wine-making in space. But it also has the potential to improve agricultural practices closer to home.

The experiments are part of a longer-term effort to make plants on Earth more resilient to climate change and disease by exposing them to new stresses.

“When you expose wine, when you expose cells, plants to an environment without gravity…we create tremendous stress on any living species and this stress accelerates some of the natural progression,” says Nicolas Gaume, CEO and co-founder Space Cargo Unlimited.

“The idea is that what is able to resist the stress, the lack of gravity, will be better equipped, more resilient in the face of stresses such as climate change which leads to more salty soils due to the lower content of water and also higher temperature variations.”

Scientists will be analysing the wine and vines in more detail over the next few months.