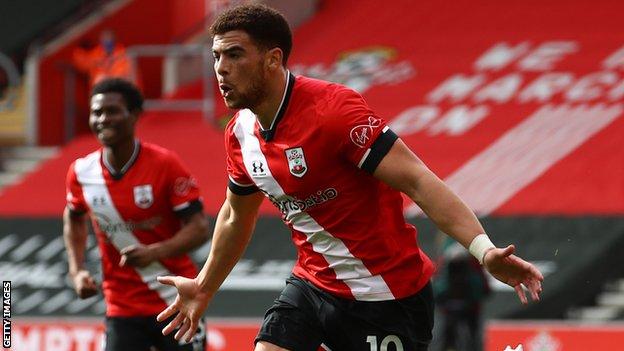 Che Adams qualifies for Scotland through the grandparent rule

Che Adams has been called up to Steve Clarke's Scotland squad for this month's World Cup qualifiers.

The Southampton striker, 24, has been capped by England Under-20s but qualifies for Scotland through the grandparent rule. Uncapped Kevin Nisbet and Jack Hendry are also included.

Clarke's side face Austria at home on 25 March, Israel away three days later and Faroe Islands at home on 31 March.

"I heard a whisper that he decided he wanted to come on board," Clarke said.

"I had a couple of chats with him last week. It's an area of the team that we have to try and improve. Che can go on and hopefully have a distinguished Scottish career.

"I believe he spoke to Scotland, Alex McLeish was the manager, four years ago. He's got a lot to his game that will certainly make the squad better and hopefully make the team better."

Defender Hendry – one of three right-footed defenders from a pool of 10 in Clarke's squad – is on loan at Belgian side KV Oostende from Celtic while forward Nisbet has scored 14 times for Hibernian this season.

"He's got an eye for a goal," Clarke said of Nisbet. "I like his movement, I like the way he gets free in the box. It is an area of the pitch where I have to keep looking because we need to score more goals. It would be nice if we could get more from the forward players.

"He's got good attributes, Jack. He's shown a good maturity in moving away and trying to restart his career elsewhere. He's a had a good season in Belgium."

Adams has scored seven goals this season with his third in three games coming in Southampton's weekend defeat by Brighton.

By contrast, Lyndon Dykes – Scotland's main striker in recent games, who is also in the squad – has not scored in 20 games since November and has been relegated to the bench in four of Queens Park Rangers' past five games.

Sheffield United's Scottish attacking duo Oli Burke and Oli McBurnie have three goals between them this season and only Burke has netted for his country – once. McBurnie retains his place in Clarke's group.

There is, however, no room for Celtic's Leigh Griffiths, Dundee United forward Lawrence Shankland or Parkhead midfielder David Turnbull, with the latter tipped by many to be in contention for a maiden call up to the senior squad. Defender Grant Hanley returns, with his last cap coming in 2018.

Clarke said Turnbull "looks a good prospect for us" and his message to those who had dropped out of the squad was: "Keep doing well for your club."

This month's opening qualifiers for Qatar 2022 are Scotland's last scheduled matches before their European Championship games with Czech Republic, England and Croatia at this summer's finals.

"The only thing that's important in the short term is the World Cup qualifiers," added Clarke. "We want to get off to a good start, we want to be competitive. We don't want to be a squad of players and a management team that only get to one finals, one championship."