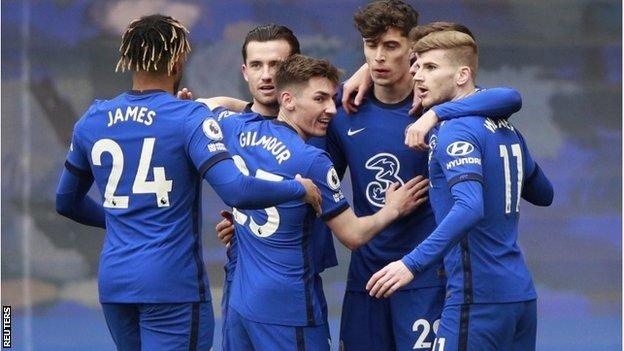 Havertz, one of five changes in between the Blues' Champions League semi-final legs against Real Madrid, latched on to Mason Mount's through ball to give them an early lead.

He doubled their advantage when he finished after a one-two with Timo Werner.

In between those efforts he also had a goal correctly ruled out for offside.

Fulham had plenty of chances in the first half with Antonee Robinson and Ola Aina forcing good saves from Edouard Mendy.

But they created nothing of note after the break and now sit nine points off safety with four games to go.

Chelsea, who just need a goalless home draw against Real on Wednesday to reach the Champions League final, have a six-point cushion over West Ham in the top four.

"We need him spot on to achieve our goals. There are many reasons to maybe talk about why it is a difficult situation [for Havertz in his first season in England] but in the end you are responsible for yourself and he is.

"He must adapt as quick as possible. That is what he is doing and that is what we demand of him."

Havertz has struggled to live up to high expectations following his £71m move from Bayer Leverkusen last summer – with Covid leaving him bedridden in November. In 90 minutes against Fulham he managed to double his Premier League goal tally.

A clinical performance – he scored with both his shots – could put him in manager Tuchel's thinking for the Real game on Wednesday.

"I'm always desperate to start games," Havertz said afterwards. "But I know we have a lot of quality players in the team and the other players play well as well.

"I keep going, train hard and give my best. We will see on Wednesday."

His first came at the end of a nice team move which started with goalkeeper Mendy, who has now kept 16 clean sheets in 28 Premier League games. He rolled the ball to Thiago Silva, who sprayed a long ball forward. Mount controlled it well and fed Havertz who slotted home.

He then had a goal ruled out for a clear offside from another Mount pass.

His second came when he controlled Ben Chilwell's pass and beat two defenders before finding Werner. He continued his run to ghost in behind the defence and received Werner's return pass before finishing.

The hard-working, unselfish Werner is another big-money summer signing who seems to have underachieved – yet he is the first player to reach double figures in goals and assists – 11 and 10 respectively – in his first Chelsea season since Eden Hazard in 2012-13.

Only four other Premier League players have achieved over 10 goals and assists in all competitions this season.

That Havertz goal was Chelsea's only shot in the second half until a late flurry in injury time as they were able to just cruise to victory before the biggest game of their season.

A matter of if, not when for Fulham

Brighton's 2-0 win over Leeds earlier on Saturday left Fulham nine points from safety and with four games to go for the London side it is basically all over.

They had more shots in the first half than Chelsea, seven to five, with drives from Robinson and Ademola Lookman well saved before Mendy changed his body shape to keep out Aina's deflected strike.

Scott Parker's team looked a beaten side in every way in the second half with only three efforts, none on target.

They even handed teenager Fabio Carvalho a league debut in a bid to make something happen but he did not get a chance to make much of an impact.

Their run against Chelsea now stretches to one win in their past 40 meetings.

All four teams above Fulham play again before their next game so their fate could be even closer to being sealed by then.

Chelsea are unbeaten in their past 19 home matches against Fulham in all competitions (W11 D8), a run going back to 1979.Fulham remain winless in their past 24 Premier League London derbies (D5 L19), since a 2-1 victory against West Ham in January 2014.Chelsea boss Thomas Tuchel has kept more clean sheets (11) than any other manager in Premier League history from their first 15 games in charge in the competition.All eight of Kai Havertz's goals for Chelsea in all competitions have been scored in London – seven at Stamford Bridge and one at Selhurst Park.Mason Mount (five goals, two assists) and Timo Werner (two goals, five assists) have been involved in more Chelsea goals under Tuchel than any other player.

Chelsea host Real Madrid on Wednesday (20:00 BST) in the second leg of their Champions League semi-final before visiting Manchester City in the Premier League on Saturday (17:30).