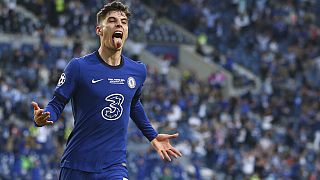 Havertz ran onto Mason Mount’s through-ball and skipped by City goalkeeper Ederson Moraes before dropping the ball into an empty net in the 42nd minute.

Chelsea has now added to the first European cup it won in 2012 and become the 13th multiple winner of the world’s biggest club competition.

Manager Thomas Tuchel got his hands on the trophy a year after losing in the 2020 final with Paris Saint Germain.

Manager Pep Guardiola may well regret tinkering with his settled team by choosing to not start a specialist holding midfielder.

The innovative Spanish coach, seeking to win the Champions League for Man City for the third time after the club’s last victory in 2011, has been accused in recent years of overthinking his tactics in the big games and might have done it again here.

The move meant Ilkay Gundogan, City’s top scorer this season and a revelation in his attacking-midfield role, dropped in midfield and struggled to protect City’s defence.

Indeed, Chelsea’s Mount had time and space to thread a pass from inside his own half through the centre of City’s defense – which was opened up by Timo Werner’s decoy run – for Havertz to run onto.

Ederson came flying out of his area and had the slightest of touches to the ball with his hand, but Havertz regained his balance and went for the easy finish.

City never had the control Guardiola sought and in that regard Chelsea manager Thomas Tuchel, another tactically astute head coach, was the winner in his face-off with a rival he describes as “the benchmark.”

City faced the colossal task of breaching Chelsea’s well-drilled defence twice in the second half: one that became much tougher when City’s star player Kevin De Bruyne was forced off in the 60th minute after a clash of heads with Antonio Rudiger.

City’s Fernandinho finally came on in the 64th minute, by which time Chelsea had retreated and was looking to counter-attack. Not even a 15-minute cameo was made by Sergio Aguero in the last match of his 10-year career at City could salvage anything for the Premier League champions, whose players slumped to the ground at the final whistle.

Chelsea’s players then raced to meet their fans: a 14,110-strong presence at Portugal’s Estádio do Dragão, the replacement venue at the end of a pandemic-afflicted season.