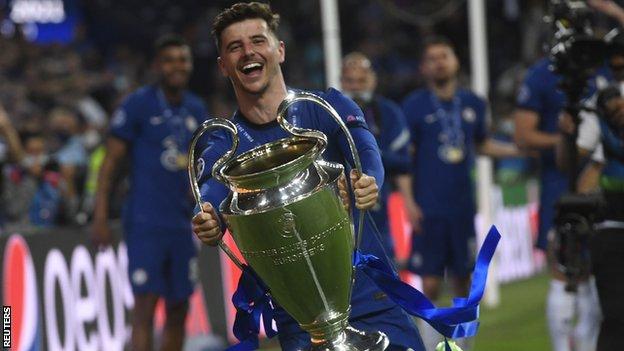 Mason Mount provided a superb assist for the winning goal

Mason Mount hailed Chelsea as "the best team in the world" as the Blues beat Premier League winners Manchester City to lift the Champions League.

German forward Kai Havertz scored the only goal in the first half in Porto to give the Blues their second triumph in the competition after success in 2012.

City had been looking for a quadruple earlier this season but were beaten in the FA Cup semi-finals by Chelsea.

"We are in a final and we won it. It's such a special occasion," said Mount.

Midfielder Mount, who provided the assist for the goal, told BT Sport: "I can't put it into words. It's impossible. I've played in two [previous] finals for Chelsea and we lost them both. It's all I've dreamt of, winning a trophy with Chelsea.

"To go all the way in the Champions League, we played some tough teams. At this moment in time, we're the best team in the world. You can't take that away from us."

Mount was named in the provisional England squad for the summer's European Championship and will almost certainly make the cut for the tournament along with several other players from the final.

He added: "Some of the boys from City will be meeting up with us and I know that will be hard. I spoke to them, they deserved to be here.

"It's tough for them but hopefully next season we'll be pushing for the Premier League as well."

Captain Cesar Azpilicueta hailed a "special, special day" and told BT Sport: "[Kai Havertz] was so calm. Not only that. He runs like crazy. That's why he deserves this.

Havertz has endured a difficult time at Stamford Bridge since joining in the summer from Bayer Leverkusen, struggling with his form as well as his fitness after contracting Covid-19.

"I've waited 15 years for this moment and now it's here," said the match winner.

The former Leicester player suffered heartbreak in the FA Cup final against his old side when he saw an injury-time goal disallowed as the Foxes went on to lift the trophy.

Chilwell said: "We fought so hard today. We knew it would be a tough game. In the second half we fought for our lives to get to this moment, to have this feeling. This is what I came to Chelsea for. It's a dream come true.

"The key was to get tight and be aggressive. I was getting tired as the game went on but when the Champions League is up for grabs, you don't really tire.

"Everyone defended for their lives. We've won the Champions League so I wouldn't even care how we played."

'We wanted to be a stone in their shoe'

The win comes a year after guiding Paris St-Germain to the final, where the Ligue 1 side were narrowly beaten by Bayern Munich.

He told BT Sport: "To share it with everybody is incredible. We made it. Wow. I don't know what to feel.

"I was so grateful to arrive a second time [in the final]. I felt different.

"The [players] were determined to win this. We wanted to be a stone in their shoe. We encouraged everybody to step up and step out, to be more brave and create dangerous counter-attacks.

"It was a tough physical game. We had to help each other out."