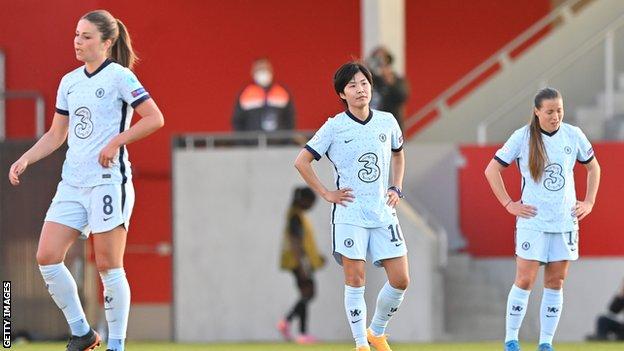 Chelsea must "eliminate" their errors if they are to reach their first Women's Champions League final, says manager Emma Hayes.

The Blues, who lead the Women's Super League, go into the home leg of their semi-final with Bayern Munich 2-1 down.

Victory would see them become the first English side in 14 years to make a European final.

"The realities are that if we're going to progress, we probably need to score more than one goal," said Hayes.

"For us, there's focus on us doing what we've done so well this season in going forward," she said, adding they need to "eliminate the errors – because ultimately both of those goals came from poor defensive mistakes from us".

"I trust the group. I trust what we know and we need to deliver the performance I know we're capable of," Hayes said.

Chelsea, who have a doubt over the fitness of captain Magdalena Eriksson for the tie, are still capable of winning an unprecedented quadruple.

Hayes' side have already won the League Cup after crushing Bristol City 6-0 in March's final, while they are two points clear at the top of the WSL with winnable games against Tottenham and Reading to come, and have a fifth-round FA Cup tie at home to Everton next month.

"It's a season we wanted to be winners in," said Chelsea's England defender Millie Bright.

"No matter what trophy we're competing for, we always want to lift that trophy.

"What we're aiming to do remains the same. It's to push one another every single day and not to settle for what we've done. We always want more.

"Sunday is a big game but we don't look too far ahead. Before we start thinking of anything else, there's a big 90-minute performance that needs to be put in and that's all we're focusing on right now." 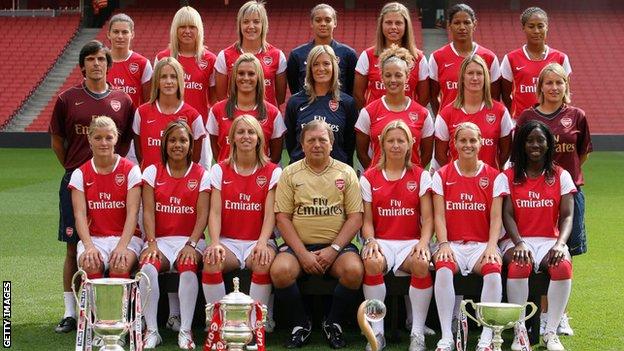 Chelsea manager Emma Hayes (second row, far right) was a coach at Arsenal in 2007 when they won the quadruple

Chelsea manager Hayes has the experience when it comes to big European games, having led her side in five European campaigns and reaching the semi-finals in three of the past four years.

She was also a coach at Arsenal when they won the Uefa Women's Cup in 2007.

"I've learned how luck matters," she said when recalling the side that beat Swedish champions Umea 1-0 over two legs in the final thanks to an Alex Scott goal in stoppage time in the opening leg.

"Emma Byrne had to have the performance of her life and a post, among other things, kept us in the game and the brilliant crowd that was at Borehamwood that day.

"It is still today one of my most favourite memories in football."