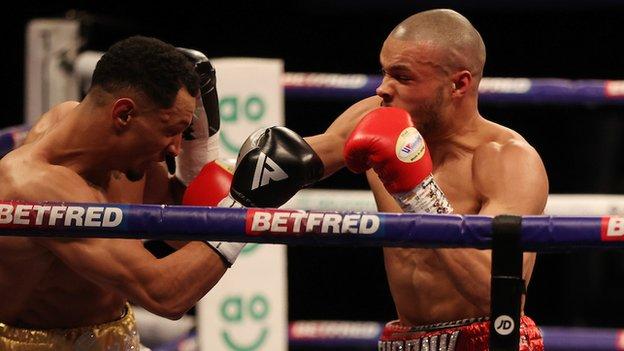 Chris Eubank Jr returned from 17 months of inactivity to out-point Marcus Morrison with a stop-start display.

In his first bout working with boxing legend Roy Jones Jr as his trainer, Eubank had Morrison troubled several times but eased off attacks.

He said he "decided to keep him in there" and ultimately scored a unanimous points win over 10 rounds.

Elsewhere, Britain's Craig Richards put up a gallant display but lost on points to Dmitry Bivol at Manchester Arena.

Russia's Bivol – defending his WBA world light-heavyweight title – was a heavy favourite against London's Richards, who had never campaigned at world level before. 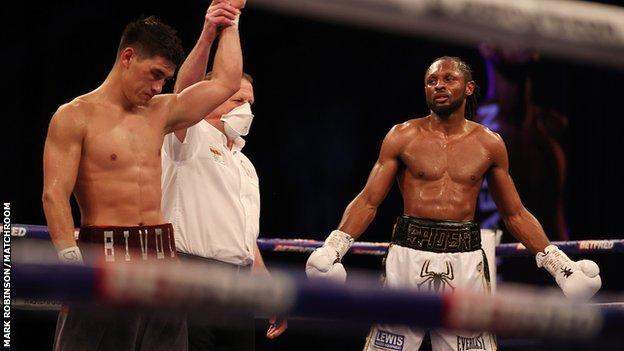 Bivol said he was happy with his performance, having not boxed since 2019

And the highly respected Bivol, 30, appeared comfortable in his first outing since 2019.

While 31-year-old Richards worked his jab admirably and grew into the fight, the champion always appeared sharper.

Bivol now says he will take on all comers and even drop down a division to face the winner of next weekend's super-middleweight unification bout between Britain's Billy Joe Saunders and Saul 'Canelo' Alvarez.

Eubank has also spent time calling out Alvarez in recent years but he needs to now gain momentum and overcoming the tough Morrison – who has now lost four times in 27 outings – is a solid start.

The 98-92 98-92 98-92 scores failed to tell a complex story as Eubank had his rival troubled under ferocious attack in the second, fifth, sixth and seventh rounds.

The 31-year-old fought in bursts and was clearly keen to bank much-needed rounds, even if it gave Morrison hope of landing something big – as he did with two solid blows in the ninth.

"I felt good – I boxed," said Eubank, who has 30 wins from 32 bouts and hopes to fight middleweight star Gennady Golovkin this year.

"I had him hurt bad in the second round and probably could have ended the fight there. I wanted rounds, I wanted to use some of the stuff Roy was telling me. He's a very tough kid. He has a hell of a chin and heart.

"If I see an opening I usually take it but I am here to learn. I spent a year and a half with Roy dedicating myself to learning and getting better. You can't learn if you knock a guy out in the second round. I decided to keep him in there."

Lightweight Hatton, 20, won all four rounds of the contest and said his display was "night and day" compared to his debut in March when he was the subject of widespread media coverage.

"I've been grateful to be bored this week without as much to do," he said. "It showed, I was more relaxed, with more composure and used my brain a lot more."