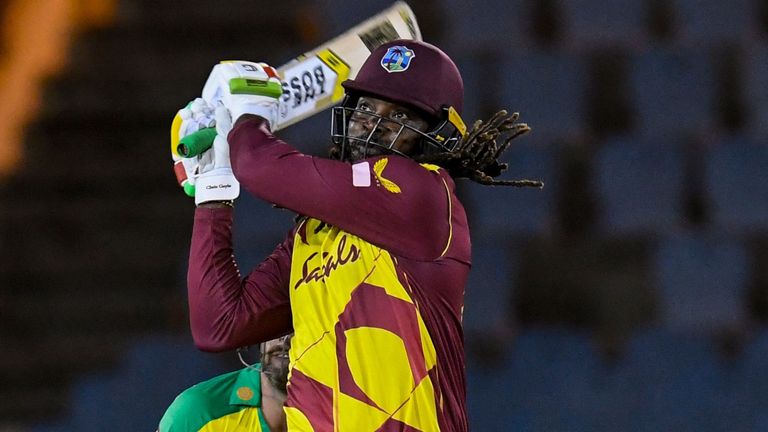 Chris Gayle belted 67 from 38 balls to guide West Indies to a six-wicket, series-clinching win over Australia in the third of five T20 internationals.

West Indies chased down Australia’s total of 141-6 with 31 balls to spare to take an unassailable 3-0 lead having won the first two matches by 18 runs and 56 runs respectively.

Stand-in captain Nicholas Pooran hit the winning runs to remain unbeaten on 32 from 27 balls – but it was all about former captain Gayle, who became the first batsman in history to 14,000 T20 runs.

The 41-year-old left-hander slogged seven sixes and four fours as he posted his first Twenty20 international half-century since an unbeaten 100 against England in March 2016.

The Jamiaican went on the attack in the second over of the reply when he plundered paceman Josh Hazlewood for a six and three consecutive boundaries.

He hit three straight sixes off leg-spinner Adam Zampa to reach his 50 in the 11th over, raising his Six Machine bat to show The Boss sticker on the blade.

Australia openers Aaron Finch (30 off 31) and Matthew Wade (23 off 16) and middle-order batsmen Moises Henriques (33) and Ashton Turner (24) made starts but didn’t go on to post big scores.

Home wrist spinner Hayden Walsh Jr, who played eight T20s for the United States before getting picked for the West Indies in 2019, took two wickets in his second over and ended with 2-18 from his four overs.

The fourth game in the series will be played Wednesday.