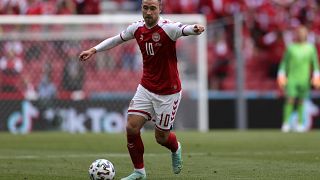 Eriksen was awake and in stable condition Saturday night after being taken to a Copenhagen hospital, the Danish football federation said. It confirmed on Twitter that Eriksen was “awake and is undergoing further examinations at Rigshospitalet”, one of Denmark’s top hospitals which is less than a mile from the Parken stadium.

Many supporters, players and others in the football world have sent goodwill messages.

More details have emerged of the dramatic and harrowing moments after the player’s collapse, which came in the 43rd minute of the match against Finland. It led to the game being suspended for about 90 minutes before both teams made the decision to play on, Finl and going on to win the game 1-0.

Christian Eriksen had just played a short pass when he fell face-forward onto the ground. His teammates immediately gestured for help and medics rushed onto the pitch.

Denmark team doctor Morten Boesen quickly realized there wasn’t a second to lose as the player lay unconscious, his pulse slipping away.

“He was breathing, and I could feel his pulse. But suddenly that changed,” Boesen said on Saturday. “And as everyone saw, we started giving him CPR.”

The next 10 minutes were among the scariest to ever unfold during a match at football’s European Championship. Several medics worked frenetically to give Eriksen chest compressions while his teammates choked away tears and formed a circle around the midfielder to shield the scene from public view.

“We managed to get Christian back,” Boesen said. “And he spoke to me before he was taken to the hospital.”

Piero Volpi, the team physician from Eriksen’s club Inter Milan, told The Associated Press that the Italian club was in contact with the Danish soccer federation. “We’re all happy that he’s been stabilized. But that’s all we know,” he said.

Volpi added that Eriksen never contracted COVID-19, has no medical conditions that he’s aware of and has passed every medical exam without problem since joining Inter in January 2020 from Tottenham.

“But we’ll talk about that when the time is right,” he said of Eriksen’s medical history. “Right now, the important thing is that he recovers.”

Eriksen is one of Denmark’s biggest stars and the incident brought an instant sense of shock to the Parken Stadium, where about 15,000 fans fell into hushed silence. Some supporters could be seen crying and hugging in the stands.

International broadcasters came in for widespread criticism for lingering too long on the scene before cutting away. Some apologised, explaining that they did not have their own cameras on the scene and were using a worldwide feed, but viewers were upset that decisions weren’t taken earlier to switch coverage to the studio.

As the fans in the stadium were waiting for updates, Finland supporters started chanting “Christian! Christian,” which was then answered by the Danish fans shouting “Eriksen! Eriksen!”

A huge roar then went up from all supporters when the stadium announcer said Eriksen was “stable and awake”. Later, the players came back out onto the pitch to a huge ovation as they started warming up for a second time.

The incident brought back memories of other footballers who have collapsed on the pitch, including Marc-Vivien Foe and Fabrice Muamba.

Foe died while playing for Cameroon during the 2003 Confederations Cup in France, while Muamba needed CPR in 2012 when he collapsed in a match between Bolton and Tottenham at White Hart Lane in north London.

Muamba, who fully recovered, wrote ”Please God” on Twitter as Eriksen was taken to the hospital.