Claressa Shields may well be the most confident fighter on the planet.

The 26-year-old describes herself as 'Greatest Woman of All Time' – and as she speaks to BBC Sport from her home in Michigan, the number of world title belts on show in a cabinet behind her add weight to the claim.

A double Olympic gold medallist, world honours at light-middleweight, middleweight and super-middleweight and the first boxer – male or female – to be undisputed champion in two divisions in the four-belt era, Shields has done it all in the fight game.

"I'm number one," says Shields, who has won all 11 of her professional bouts. "You've never seen a fighter give me trouble. I go out there and school them."

But on 10 June, Shields faces perhaps her biggest challenge as she makes her mixed martial arts debut with the Professional Fighters' League (PFL) in Atlantic City.

In a wide-ranging interview, Shields talks about the challenge of swapping sports, shares her views on how to address inequality in women's boxing, and has a message for the only woman to beat her – Britain's Savannah Marshall.

'I like to fight more than any other woman'

Shields will make her MMA debut against fellow American Brittney Elkin, who has a record of six wins and three losses.

But despite that dream, she had very little experience of martial arts before she began training last year.

"I did a little bit of karate when I was younger but no wrestling, jiu-jitsu or anything like that," she says.

"One thing they do have in common is it's a fight. And everyone knows I like to fight more than any other woman in the world."

Shields has been training in the world-renowned Jackson Wink gym in New Mexico, under the watchful eye of MMA star Holly Holm.

Holm was a three-weight boxing world champion before winning the bantamweight title in the Ultimate Fighting Championship (UFC).

"Working with Holm has has made me a better fighter, just by knowing I can learn all these different disciplines and build up different muscles."

Shields' foray into MMA does not spell the end of her boxing career. She plans to return to the ring in September, and is hoping her voice and status can bring about change.

"It should be simple – the same rules for men and women," says Shields.

"We only have two minutes and two less rounds, how can you expect the same amount of knockouts?

"We will never be able to shout for equal pay if we don't fight for the same amount of time. We fight for 20 minutes instead of 36. We're doing less work, supposedly, but we're asking for the same pay."

Shields says she will continue to stand up against the "unequal pay, unequal promotion and unequal opportunity" in women's boxing.

"I've said plenty of times I'd love to fight on the same card as Deontay Wilder, Errol Spence Jr or Manny Pacquiao," she says.

"But women are not given those opportunities, and people wonder why women's boxing has been on a standstill in so many ways."

"UFC showcase their women and grow their profile," she says. "When does boxing take that role?"

'Taylor needs to speak out' 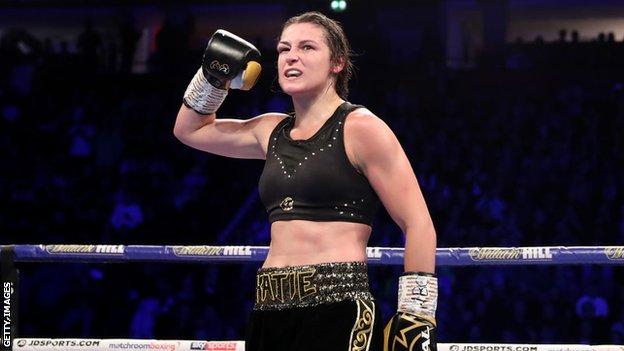 Ireland's Katie Taylor has, like Shields, played an integral part in the growth of women's boxing in recent years.

But Shields feels the current undisputed lightweight champion should "speak out more about equal pay".

"I know she thinks she gets paid a lot of money but it's nothing compared to what the men get and who she's accomplished more than," Shields adds.

"Maybe she should realise her one million should be five or ten. What she's getting now is OK but she is definitely worth more, just like I'm worth more."

Whatever their value, Taylor and Shields are two of the greatest pound-for-pound female fighters of all time.

But Shields has no doubt who is better.

"People think Katie is more exciting because her fights aren't as one-sided, but mine are one-sided because I'm just that great," she says.

"I barely get touched in fights, but after Katie's fights she has bumps and bruises."

So could we ever see a mega-fight between Shields and Taylor?

"I think Katie is too small for me," answers Shields.

"The only way we can ever figure out who is number one is if we sparred or if we fought at 147, the welterweight division."

'Savannah Marshall lives off that victory' 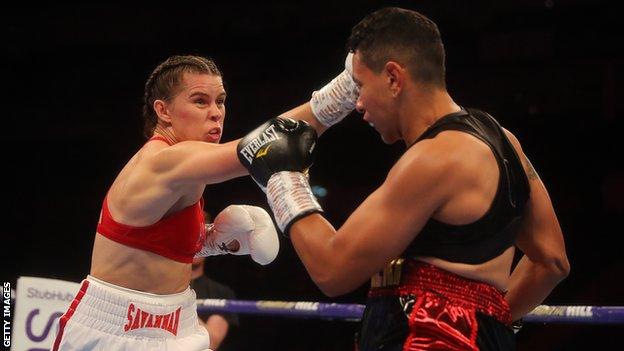 For all her achievements, there is one wrong Shields is desperate to right.

In 77 fights as an amateur, her only loss was against Marshall in the World Amateur Boxing Championships in 2012.

"She lives off that victory and I laugh at that," Shields says.

"People are building up a narrative that I'm scared of her but that's nowhere near true. I offered her the fight in 2018 and she turned it down."

The likelihood of the two meeting again – this time in the professional ranks – increased after Marshall won the WBO middleweight title, a belt vacated by Shields, in October 2020.

"I am not taking no chump change to go to the UK, or the US, to fight against Savannah," Shields adds.

"So Savannah's promoter, Eddie Hearn, needs to pay me the money or shut up."

Winning the Oscars: What is the formula for being in with a chance?No Passion, No Point is back: Eddie Hearn chats to the Rio Ferdinand about his next career move
Source