Conor McGregor lost to Dustin Poirier after two minutes and 32 seconds of the second round; Khabib Nurmagomedov said on Twitter: “This is what happened, when you change your team, leave the sparring partners who made you a champion and sparring with little kids, far away from reality.” 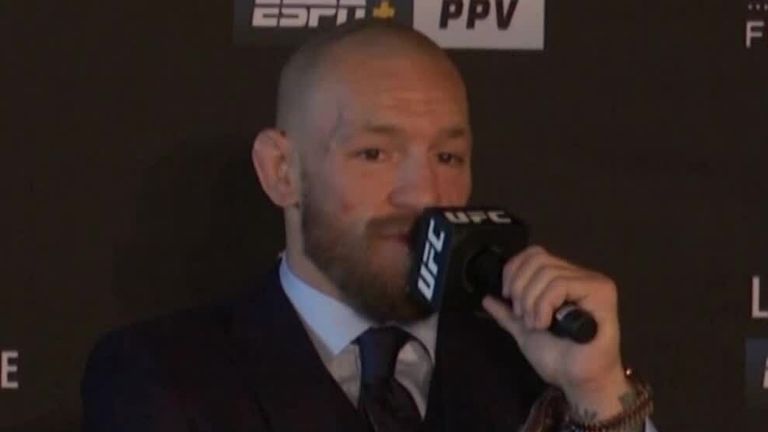 Conor McGregor’s hopes of luring Khabib Nurmagomedov into a rematch are in tatters after he was stopped by Dustin Poirier in a seismic upset at UFC 257 at Fight Island in Abu Dhabi.

McGregor had beaten Poirier inside two minutes in September 2014 and was overwhelming favourite to see off his lightweight rival again in a bid to get fierce adversary Nurmagomedov to reverse his retirement decision.

But the American managed to gain revenge, surviving one or two nervy moments in the first round and then gaining the upper hand in the second round with some savage kicks to McGregor’s lead leg.

Poirier forced McGregor back with a flurry of punches, flooring him with a short right hook before a couple of blows to the defenceless Irishman led to the end of the fight after two minutes and 32 seconds of the second round. This was McGregor’s first fight in a year when he stopped Donald Cerrone in 40 seconds. Before that he had not stepped inside the octagon since October 2018 when he lost to Nurmagomedov.

After an early feeling out process, Poirier managed to get the takedown in the first round but McGregor was soon back on his feet and landing shoulder strikes that proved so effective in his welterweight victory over Cerrone.

A sharp elbow momentarily buzzed Poirier, as did a counter right uppercut although he responded with a smart check hook and was regularly kicking out at McGregor’s right calf in an attempt to stifle his rhythm.

It was a tactic McGregor praised afterwards, saying a dead leg meant he “just wasn’t as comfortable as I needed to be” as Poirier capitalised on his opponent’s uneasiness midway through the second round. 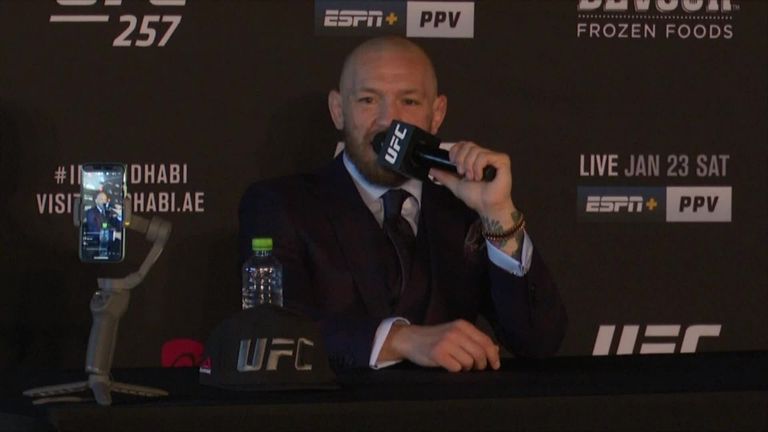 “It’s heart-breaking and hard to take,” said 32-year-old McGregor, who turned up to the post-fight press conference on crutches. “My leg is completely dead. It’s like an American football in my suit at the minute.

“If you put in the time in here, you’re going to get cosy in here and I just have to dust it off and come back and that’s what I will do. I need activity, you don’t get away with being inactive in this business.

“As long as you stay active and as long as you compete, things shape around you. You show up, you reap the rewards. That’s what happened for Dustin and it’s what’s happened against me. “I’ll keep my eyes on the prize. Don’t write me off yet, I’ll make my adjustments and keep moving. I’ll go back, get healthy and I’ll re-prepare. I’ve got to a great place in my body physically and I’ll continue to grow that.”

McGregor had warned Nurmagomedov “the world knows this war is not over”, despite the Russian bowing out of the sport last October after extending his perfect professional record to 29-0 with a win over Justin Gaethje.

UFC president Dana White had indicated the lightweight champion could be tempted to make a comeback if he saw “something spectacular” between t he two headliners in front of 2,000 socially-distanced fans at the Etihad Arena. 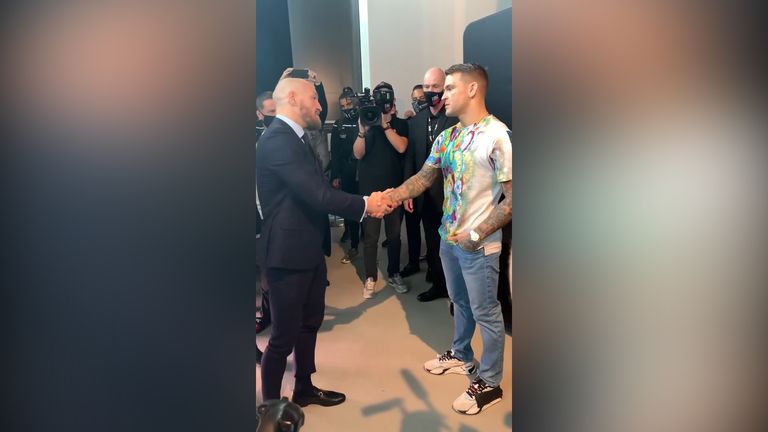 However, White revealed he had spoken to Nurmagomedov following the fight and said: “He said to me ‘be honest with yourself, I’m so many levels above these guys, I’ve beaten these guys’. It doesn’t sound very positive. We’ll see.”

In the moments after McGregor’s defeat, Nurmagomedov took to Twitter to accuse his foe of abandoning those who had helped him become the highest-profile fighter in the company, saying: “This is what happened, when you change your team, leave the sparring partners who made you a champion and sparring with little kids, far away from reality.”

McGregor gave short shrift to those allegations, responding: “My team has been the team since day one, I’ve not changed anything. That’s the character of the man, for sure. What does he want to do, does he want to come back or not?

“If he wants to have his disrespectful comments, come back and let’s go again, my man. I’m here for it. That’s fighting talk. If you’re coming back, come back – you try and do it.”

McGregor raised the prospect of trilogy bouts with Poirier or Nate Diaz, having now won once and lost once against both fighters. Poirier himself would relish another bout with McGregor or a showdown with Diaz. 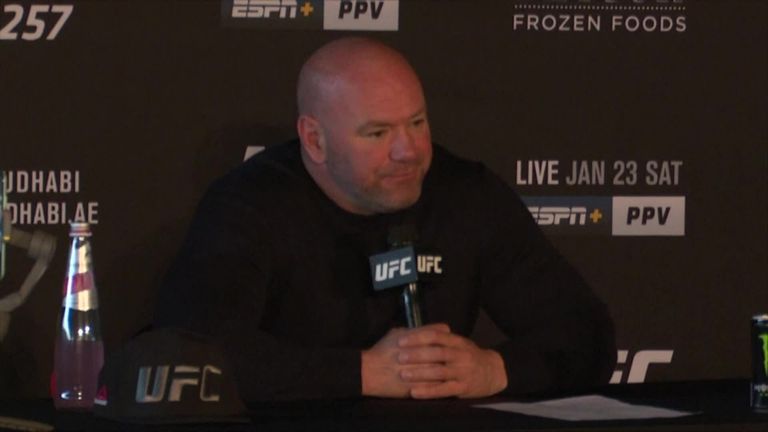 “A rematch with Conor interests me, you probably have to do it again,” said Poirier. “I’ve always wanted to whip Nate Diaz’s a**. Me and Conor are one and one. We’ll see.”

McGregor slipped to his fifth defeat in 27 professional mixed martial arts contests while Poirier improved his record to 27 wins and six defeats.

The mutual admiration between the pair, both 32, has been evident in the build-up to this fight – Poirier even gave McGregor a bottle of his signature hot sauce at Friday’s weigh-in – and the respect continued after the bout. 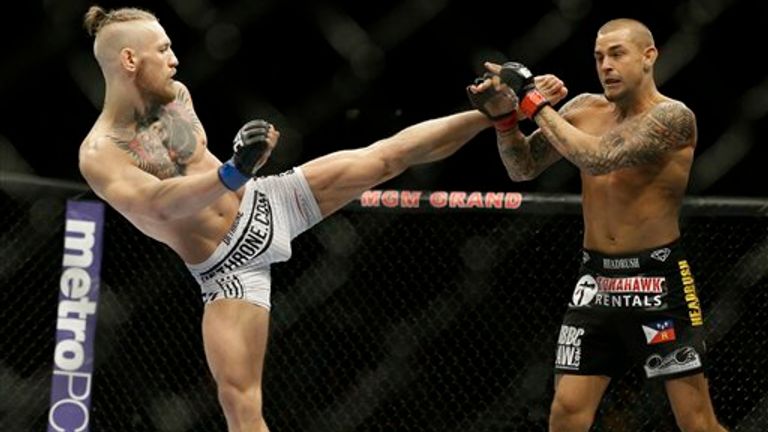 Poirier said in the octagon afterwards: “I’m happy but I’m not surprised, I put in the work. Conor took this result very professionally and nothing but respect. We’re 1-1, maybe we have to do it again.

“The goal was to be technical, pick my shots, not brawl at all. I felt like I was boxing pretty well with Conor, he hit with some good counters.

“I felt like this was a title fight. If Khabib’s not coming back then me and Conor are the two best guys. I’m the champion.”

“This is the greatest moment in my professional life,” Chandler said afterwards.

“Dustin Poirier: your time is coming and Khabib: if you do see fit to grace us with your presence back here in the UFC octagon in your quest for 30-0 you’ve got to beat somebody, so beat me if you can.”

Earlier, Joanne Calderwood outworked Jessica Eye, with the Scottish flyweight landing more than 200 strikes as she claimed a unanimous decision win as two of the judges scored the bout 30-27 and a third 29-28, all in her favour.

“I beat her and she’s got no excuses,” Calderwood said.