Former WWE Champion Drew McIntyre believes UFC star Conor McGregor will show up in WWE “when the time is right” and would be at “lovely” fit at WWE; McIntyre on McGregor: “He’s such a huge star, he knows how to entertain and is an incredible fighter as well” 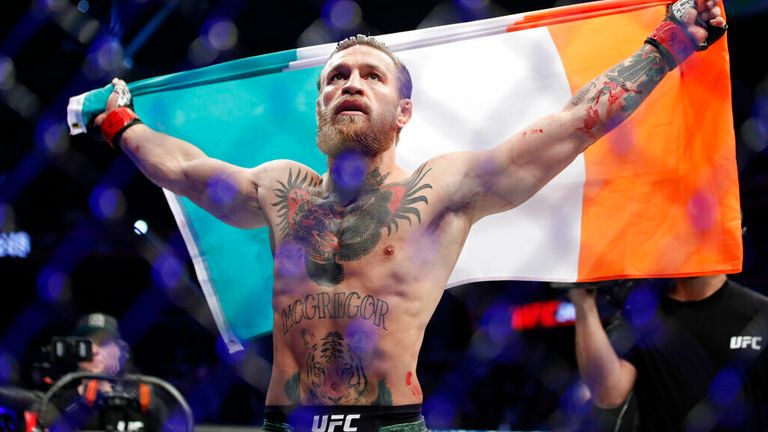 Conor McGregor will show up in WWE “when the time is right”, says former champion Drew McIntyre.

Speaking exclusively to Sky Sports News’ Anton Toloui, the Scotsman believes McGregor would be a welcome addition to the WWE roster, despite McIntyre trolling the Irishman before his comeback fight in January.

The former WWE champion tweeted a message mocking the Irishman ahead of his fight with Dustin Poirier at UFC 257, posting picture of McGregor tapping out to a superimposed meme of Bernie Sanders in a facemask, writing alongside the picture: “Good luck tonight, McTapper.”

And McIntyre admitted that while he would welcome McGregor to WWE, it wouldn’t be with open arms.

“He’s such a huge star, he knows how to entertain and is an incredible fighter as well. When the time is right, he will show up in WWE and it’s going to be exciting.”

The former UFC lightweight and featherweight champion teased WWE fans he could be set to appear in the company after answering a cryptic tweet from Finn Balor. The NXT Champion tweeted a picture of three action figures – Balor, McGregor and Triple H – standing inside a wrestling ring.

With WrestleMania just around the corner, could we see Ireland’s McGregor facing off against Scotland’s McIntyre?

“I know I give him some c**p but chances are we’re probably not going to have a match because he’s the size of my left calf! I will probably stick with (Tyson) Fury, he’s a big guy and we’re heavyweights, but it would be cool to have McGregor part of it.”

“If he’s feeling frisky, we’ll have ourselves a little scrap, but he is such an entertainer. He gets it and he would fit in lovely in WWE.”