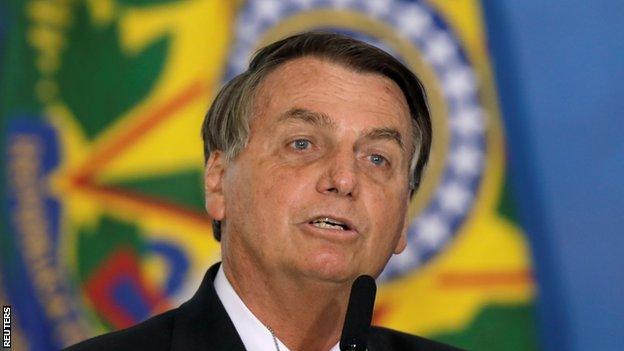 The Copa America, which is set to start on Sunday, can go ahead in Brazil, the country's Supreme Court has decided.

Judges held an emergency session on Thursday to consider requests to halt the competition because of the coronavirus pandemic.

It was argued that hosting the tournament would endanger the lives of thousands of people.

The judges said that the Brazilian constitution did not give the court the power to block it.

But they said that state governors and city mayors should do more to ensure "appropriate health protocols" are respected.

They also expressed their dismay at President Jair Bolsonaro's last-minute decision to stage the tournament, which will be held with no fans in stadiums.

Teams face mandatory testing every 48 hours. Their movements will be restricted and they will travel to host cities aboard chartered flights.

The tournament, postponed from 2020 because of the coronavirus pandemic, was originally to have been staged in Colombia and Argentina.

But Colombia was removed as co-host on 20 May because of domestic civil unrest, and Argentina was then stripped of its host status on 30 May, with organisers citing coronavirus concerns and the "present circumstances".

Earlier this week, Brazil's players criticised the decision to hold the tournament in their country.

Brazil has recorded more than 475,000 deaths attributed to coronavirus, the second highest number in the world after the US.

Copa America 2021: Everything you need to know
Source