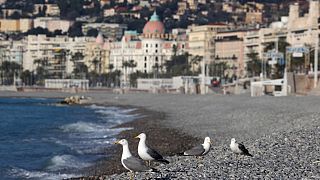 Brussels will present its proposal for an EU-wide vaccination certificate on Wednesday, in a bid to boost the continent’s battered tourism industry.

The bloc’s so-called Green Pass will be designed to allow Europeans to travel again safely to other EU countries and is expected to show three things.

As Euronews reported last week, the certificate will only show if someone has been vaccinated with a European Medicines Agency-approved jab.

As it stands this is a blow to the thousands of Europeans who have already been inoculated with a Russian or Chinese vaccine, neither of which have been given the green light by the EMA.

The passport will also show any negative results received from COVID-19 tests, as well as those who have previously recovered from the virus.

However, the move has not been without controversy.

Dr. Sarah Chan is a Reader in Bioethics at the Usher Institute for Population Health Sciences and Informatics in Edinburgh. She says that while the idea of a vaccine passport offers the hope of life returning to normal, the reality isn’t that straightforward:

“I think vaccine passports have the potential to be unnecessarily divisive. It’s likely to lead to negative consequences, particularly in being unfair and creating inequalities.”

Aristides Hatzis is a professor of the philosophy of law at the University of Athens. He argues that the Green Pass could encourage people to get vaccinated, something that would benefit the wider society and the economy.

Listen to the full debate with Dr Chan and Professor Hatzis by clicking on the media player above.

But for those in the Travel trade like David Reculez, director of Eagle Travel, the news is very good indeed. He told Euronews that it could be a gamechanger for the tourism sector.

“For us, the travel agencies, the new certificate is really a good hope because it will definitely help people to travel again. And from now, since last year, since March, the tourism industry is very, very low,” said Reculez.

“We see that there are a lot of people who want to travel, but they want to travel in a safe way and also not need to follow hard rules or quarantine, etc.”

According to Eurostat, nights spent in tourism accommodation across the EU dropped by 52 per cent in 2020 compared to 2019, which works out as 1.5 billion fewer nights.

And for countries like Greece, Malta and Cyprus, that rely heavily on tourism, the drop exceeded 70 per cent.

At the other end of the scale, the Netherlands and Denmark reported drops of less than 35 per cent.

Tourism also represents 10 per cent of EU GDP and 30 million people work in the industry, so the stakes couldn’t be higher.

But many citizens are now readying themselves to travel again.

Euronews spoke to one tourist, Michelle, who came to Belgium for tourism a few days before the country imposed a non-essential travel ban.

She is preparing to travel once again and said that the idea of a vaccine certificate is a good one.

“It will help people to travel more because they will feel safer in one way or another and also safe with the environment and with the country to which they are going to travel and I think it is a good initiative,” Michelle told Euronews.

Eduardo Santander, executive director of the European Travel Commission, says the tourism sector is hoping that the certificate will allow for a more coordinated reopening across all member states, in order to avoid the chaos experienced over the past year, with different measures being consistently implemented by national governments.

“The summer is just there. It’s almost the last bullet that we have in our guns for many tourism entrepreneurs, many tourism companies and also for many operators, airlines, cruise lines. This summer has to work,” he told Euronews.

Santander also says that for him and most of the tourism industry, mid-May is the deadline to have a travel certificate ready if the holiday season is to be saved.