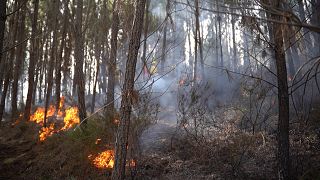 Could climate data be the key to slowing the spread of wildfires? We talk to a wildfire analyst and a climate change risk expert in Spain as they join forces to get to the bottom of natural fires and how they’re changing in this episode of our monthly climate change series Climate Now. 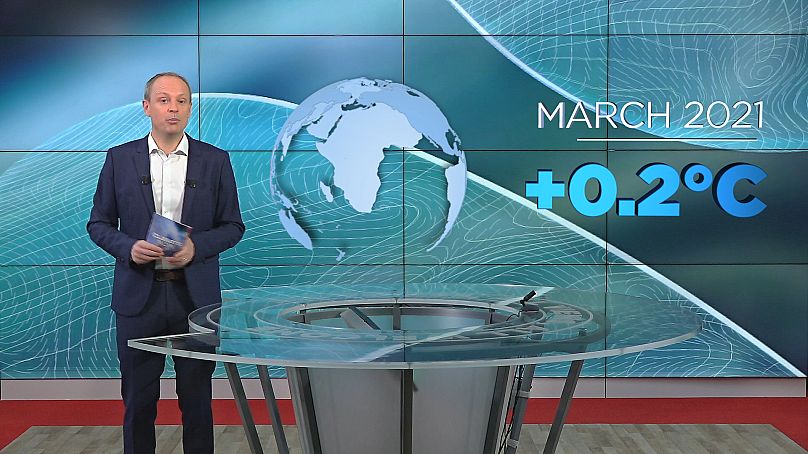 Globally, March was cooler than it has been for the past five years, although temperatures were still 0.2 degrees Celsius above the new 1991-2020 average.

In Europe, temperatures were not particularly extreme, but there was a great deal of variability elsewhere. 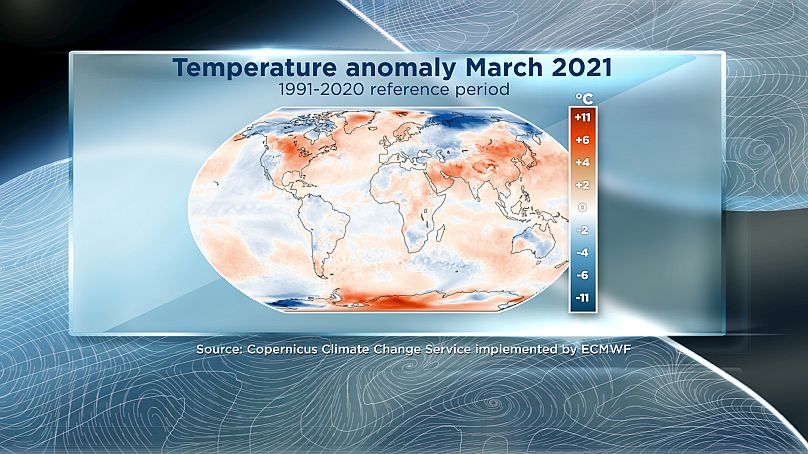 It was more than 6 degrees cooler than average in western Antarctica and northern Siberia. It was also several degrees warmer than average in a huge band stretching from the Arabian peninsula, across through Mongolia, China and eastern Russia. There was another hotspot in the Svalbard archipelago too.

Photos from one of the Sentinel-3 satellites show a clear area of blue sea north of Svalbard that would normally be covered by sea ice in March. 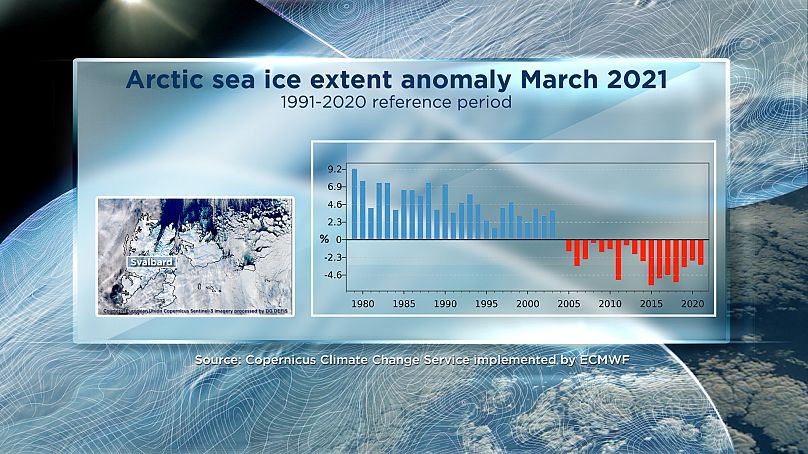 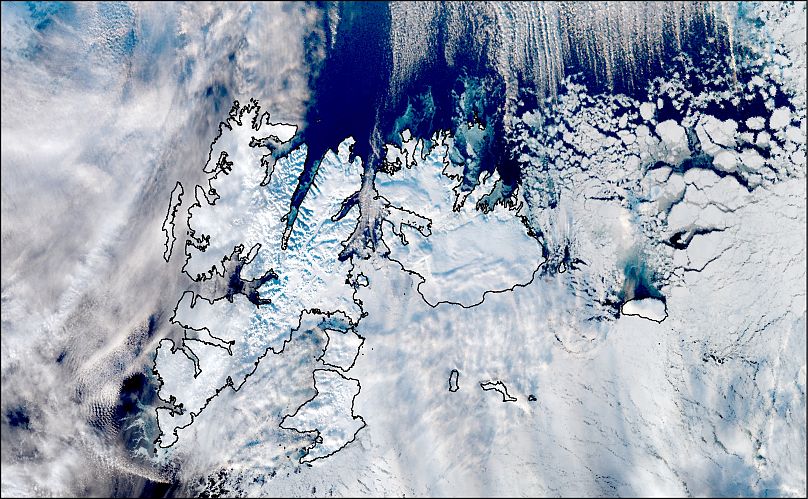 We know that as the planet warms, there’s a higher risk of wildfires increasing in some areas. Not only do these fires claim lives and destroy land and livelihoods, but they also kill off biodiversity. To better manage the risks, firefighters and climate scientists are now working together on a smart new prediction system.

We went to meet them at the site of a blaze that blackened 40 hectares of hillside near Tarragona in Catalonia. The fire is an example of a new breed of wildfire, which now burns hotter, moves faster, and can live for weeks underground. Catalan fire expert, Marc Castellnou, tells us that the fires now restart all the time. They stay alive “in the subsoil, in roots, and the flames can reignite”. At this particular site, he tells us that this “has happened around 11 times in the last 3 weeks” He believes this shows a “clear example of how the fire regime has been changing in recent years”.

The change Marc and his teams are witnessing is partly due to a warmer climate. The winters aren’t so cold and there are longer dry spells. Poor forest management is another factor. Marc’s goal is to get ahead of the flames, so he’s now working on a new fire prediction system with climate change risk expert Laia Romero and Director of Lobelia Earth. She tells Euronews that she is relishing the opportunity to bring her science data to a real-life application.

“Working with firefighters who run day-to-day operations and understanding how fire behaves from their perspective, gives us in-depth knowledge for the work we are doing so that we can go beyond a theoretical model and really use all the data that’s available,” she says.

Laia’s Barcelona-based company is using artificial intelligence to incorporate a huge range of data into the new wildfire prediction system. That includes information about the vegetation cover, topography, rainfall, temperature, plus long-term climate simulations and one key new ingredient that should make all the difference: soil moisture maps. 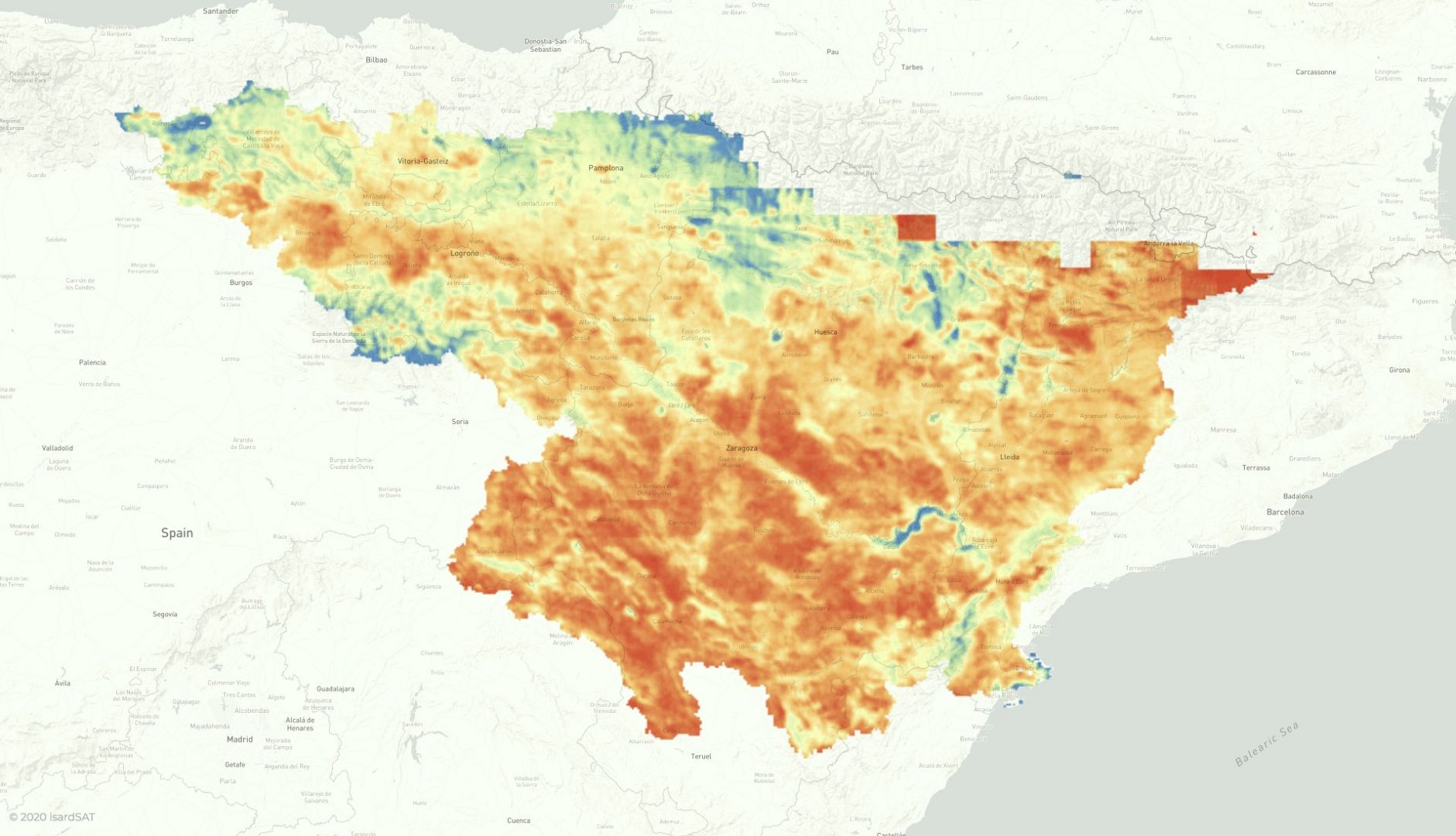 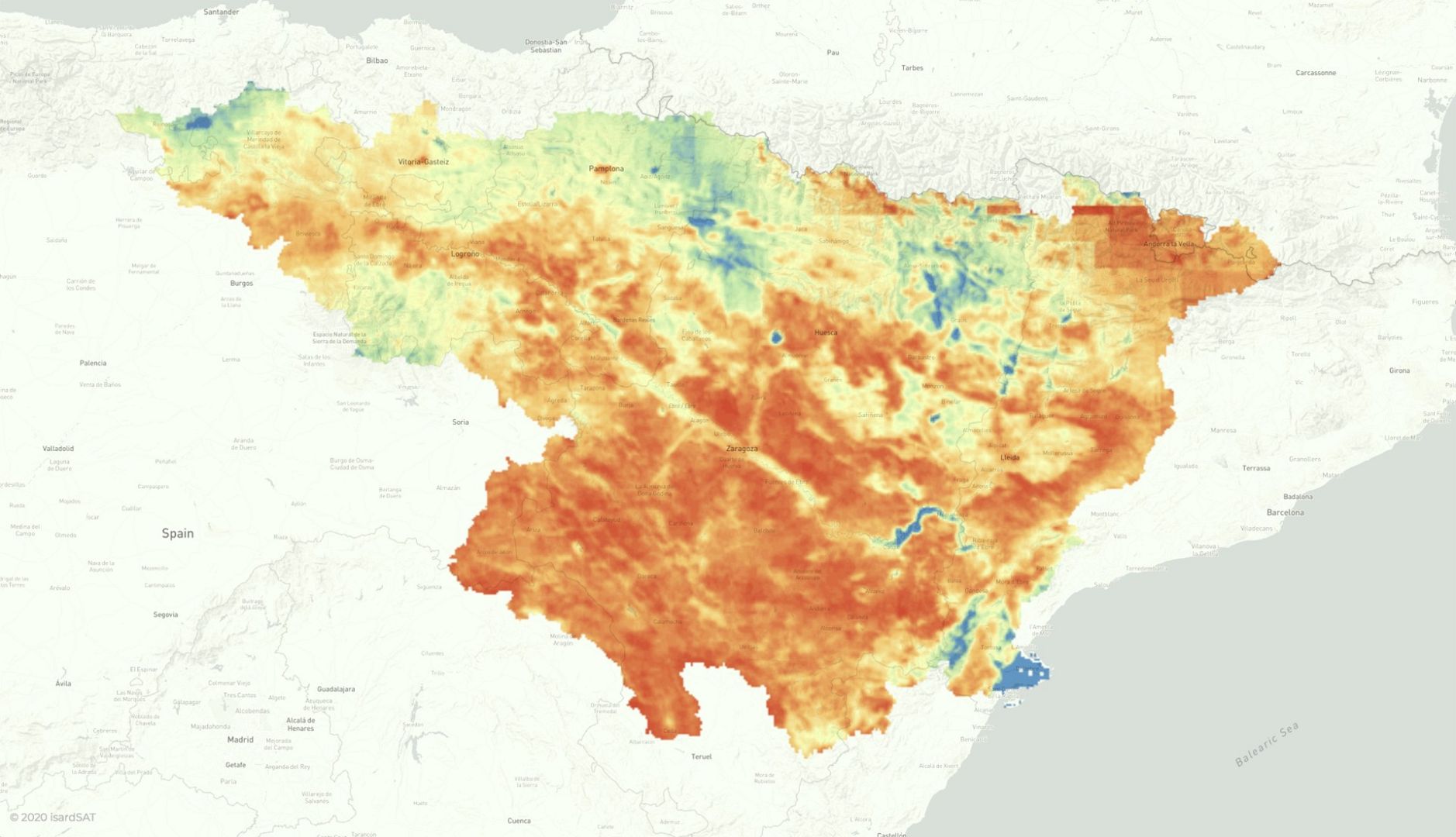 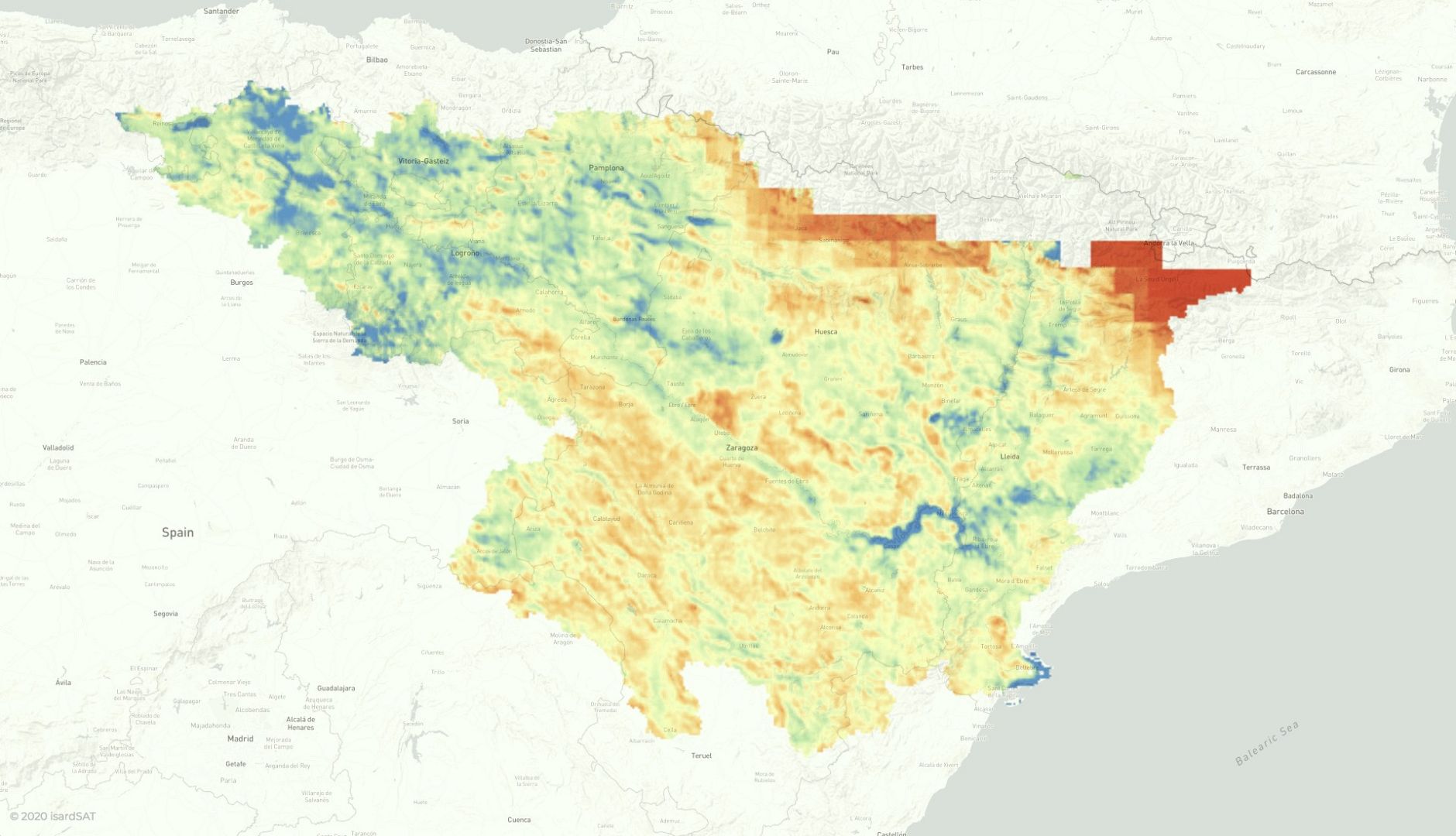 Droughts create ideal conditions for wildfires. To counteract this “chronic risk”, Laia tells us that “soil moisture is a perfect indicator that helps anticipate whether in one, two or three months there will be a probability of fire”.

French Earth Observation scientist and AI engineer Mélissande Machefer, who works with Laia, tells Euronews that fine tuning predictions of wildfires using artificial intelligence allows them the “power to aggregate all this data together to extract the areas that will be most vulnerable.”

To illustrate her point, she underlines how current wildfire forecasting based on weather data is missing out on the long-term climate information that can reveal if the ecosystem in a certain landscape is ‘stressed’ or not.

“The Mediterranean, Spain, do not behave the same as in Greece, or Australia or California. So by adding data that describes the state of the regional and local system at certain times and in certain places, we provide a great deal higher precision,” she explains. 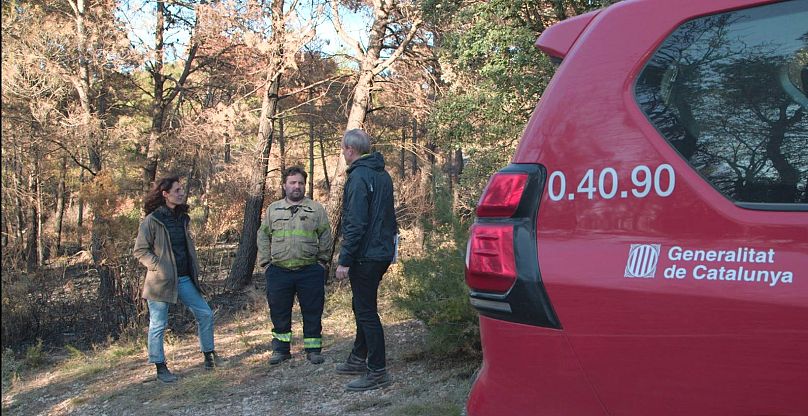 Laia Romero, Marc Castellnou and Jeremy Wilks at site of wildfire in CataloniaEuronews

Giving the ‘Bombers’ a head-start

The system that Lobelia Earth and the Catalan ‘Bombers’ are building will allow the crews on the ground to use their limited resources more effectively. They will be able to clear fire breaks and inform authorities of risk areas before the flames begin to rise.

Of course, the fires themselves will not disappear, and they are indeed a natural part of the ecosystem in many parts of Europe. However the effects of climate change and the overall reduction in the number of farmers grazing livestock and working the land has left many areas vulnerable to fires.

The hope is that the risk can be better managed, and the environment better protected. As Marc tells Euronews, “we have to be smarter and understand that climate change is going to happen either way and we have to come out of it having saved as much biodiversity as possible, and not having lost everything”.

You can get more information about wildfires on our live YouTube debate with Laia Romero, Bertrand Piccard and other climate entrepreneurs on our website.