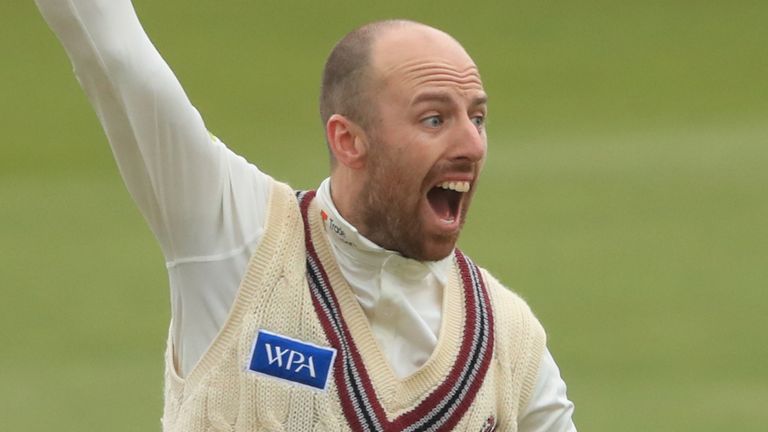 Jack Leach took five wickets as Somerset celebrated securing their place in Division One by putting Surrey under pressure on the third day of the LV=Insurance County Championship contest at The Kia Oval.

The England left-arm spinner finished with 5-42 from 33 overs, including 19 maidens, as Surrey reached 239-8 in reply to Somerset’s 429 all out in this Group 2 encounter.

Hampshire’s failure to secure maximum batting points against Gloucestershire ensured Somerset’s place in the top flight when the Championship concludes in September, and Leach bowled outstandingly to give them an outside chance of finishing their Group Two campaign with a victory.

Nick Gubbins’ unbeaten 137 set Hampshire up to press for victory at Cheltenham as they declared on 486-7 before Gloucestershire closed on 107-3 in their second innings to trail by 150.

Gubbins’ first century for his new county, in the second match of his loan from Middlesex ahead of a permanent move, leaves Hampshire firm favourites to secure the victory they need to leapfrog Gloucestershire and qu alify for Division One.

Stevie Eskinazi batted with a runner to score a vital 53 not out from 173 balls to boost Middlesex’s hopes of beating Leicestershire at Northwood.

Middlesex had a 96-run first-innings advantage after bowling Leicestershire out for 228 but quickly sank to 17-4 in their second innings before Eskinazi led the recovery to lift his side into a lead of 272.

Elsewhere, Joey Evison’s career-best haul of 5-21 ensured Nottinghamshire will be in Division One as Durham succumbed to 165 in response to their opponents’ 328 at Emirates Riverside.

Nottinghamshire, who have guaranteed themselves a top-two finish in their group, decided against enforcing the follow-on and increased their lead to 288 after closing on 125-5, with Haseeb Hameed top-scoring with 58.

Warwickshire are on the brink of joining Nottinghamshire from their group despite encountering prolonged Worcestershire resistance at New Road.

Daryl Mitchell’s 113 and an unbeaten 98 from Ed Barnard eked out a 20-run lead for the home side in reply to the visitors’ 395 and they still have two wickets in hand – but the Bears will seal a spot amongst the six teams who will fight it out for the crown in September if they avoid defeat on Wednesday.

Also in Group 3, Ali Orr’s maiden first-class century, which included 19 fours, and opening partner Tom Haines’ 94 ushered Sussex into a lead of 293 after they closed on 277-3 against Kent at Canterbury – Kent had earlier been dismissed for 165 with Jamie Atkins taking 5-51.

The final game in Group 3, the Roses clash between Yorkshire and Lancashire at Emerald Headingley, saw play suspended on day three after Yorkshire’s Dominic Leech suffered a nasty leg injury on an outfield deemed “unfit and unsafe”.