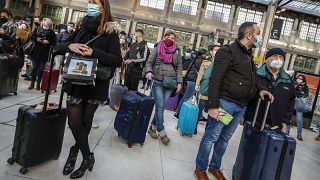 The people of Poland and a third of the French population are waking up to new lockdowns on Saturday to varying degrees, in the latest bid by authorities to stem the rising coronavirus tide.

Much of Europe is experiencing a surge in infections, prompting several countries to ponder fresh restrictions faced with an ongoing shortage of vaccines that Germany’s health minister said left the continent unable to prevent a third wave of the pandemic.

In France, some 21 million people are affected across 16 départements, in Paris and much of the north of the country as well as in Alpes-Maritimes in the south. Most shops are being closed but the French can leave their homes for unlimited periods within a 10-kilometre radius. Travel between regions is banned unless for urgent reasons.

The measures are more flexible and less restrictive than a year ago, when the first lockdown was imposed on the country as the new disease took hold. The government backed off ordering a tough lockdown, despite an increasingly alarming situation in hospitals with a rise in the number of COVID-19 patients.

Hours before the new measures took effect, some 400 kilometres of traffic jams were reported around the outskirts of French capital as people left the city to escape the impact. The volume of traffic and train reservations were both up by 20% on normal levels, France’s transport minister said, adding that this was much less than just before the start of the second lockdown last autumn.

For Poland the new lockdown, imposed for three weeks, is nationwide — albeit less restrictive than the one imposed a year ago. More people in the central European nation are on respirators than at any time since the start of the pandemic and children make up a greater percentage of those hospitalised.

Officials blame the surge on a more transmissible mutation first identified in Britain that is spreading like wildfire in the country, and they say the worst is yet to come.

The move is an about-turn after the Polish government eased restrictions in February — running against the trend in many other European countries — allowing hotels, museums, cinemas, theatres and swimming pools to open under conditions.

A week after saying COVID-19 was under control, Bulgaria locks downParis and more than a dozen French areas to lock down for a month, says PM Jean Castex

From Sunday, Germany is to restrict border crossings with Poland, a country now classed as a “high-risk” zone by the health body the Robert Koch Institute (RKI). People entering Germany from Poland will have to present a negative test for the virus. Cyprus and Bulgaria — which announced a new 10-day lockdown this week — have also been put in the same category.

Germany itself could face a return to stricter lockdown measures by Easter, officials have warned. Infection rates in the country are “now clearly exponential,” Lars Schaade, RKI’s deputy head, said on Friday.

Hungary, meanwhile, extended lockdown restrictions for another week as a powerful surge breaks records each day — despite the fact that the country has the second-highest vaccination rate in the EU after Malta.

In Bosnia, which is not in the EU, soaring infections prompted a lockdown taking effect in the capital on Friday. The Balkan nation of 3.3 million has yet to start mass vaccination of its citizens and has kept relaxed measures and ski resorts open throughout the winter season.

Vaccine rollouts have repeatedly stumbled across Europe. The UK is a notable exception: the outbreak there has receded, and the country has been widely praised for its vaccination campaign. However, like the rest of Europe it announced this week that it too would be hit by supply shortages.

Countries across the continent — including France, Germany and Italy — resumed vaccinations with the AstraZeneca shot on Friday. It followed a four-day suspension amid reports of a small number of blood clots, casting doubt on a vaccine that is critical to ending the coronavirus pandemic.

Leaders sought to reassure their populations that it is safe, with British and French prime ministers among several politicians to receive first jabs.

Jean Castex, 55, said he stepped up because he wanted to show full confidence in the AstraZeneca shot, even though he is not yet eligible under France’s rules. Boris Johnson, 56, said he “cannot recommend it too highly” on leaving the hospital after his jab.

Slovenia’s President Borut Pahor and Prime Minister Janez Jansa also got the AstraZeneca shot on Friday. Italian Premier Mario Draghi and German Chancellor Angela Merkel said they would get it when it was their turn.

The European Medicines Agency (EMA) concluded on Thursday that the AstraZeneca-Oxford vaccine was “safe and effective”, with the benefits outweighing the risks.

However, Finland, Norway, Sweden and Denmark said they would not be lifting their suspensions while investigations into the vaccine continued. France’s health authority has recommended its use only for people aged 55 and over.