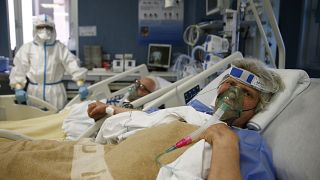 The country’s death toll from the pandemic now stands at 103,001, according to the Health Ministry. This is the highest tally in the European Union and the second in Europe after the UK.

Nearly 20,400 new cases were also confirmed. The total number of infections in the country since the beginning of the global health crisis to more than 3.2 million

The latest numbers come as half of Italy’s region entered a strict lockdown on Monday to counter a spike in infections. The nine regions in the so-called “red zone” — including Lazio where the capital, Rome, is located — will remain locked down until at least April 6.

They will be joined by the rest of the country over the Easter holiday from April 3 to 5.

A slowdown in delivery of vaccines by manufacturers and other logistics problems had bogged down Italy’s vaccine rollout, but the pace of injections has improved in recent days.

More than 7 million doses have so far been administered across Italy and 2.1 million people have been fully vaccinated.

On Monday, Italy joined several other European nations in temporarily suspending the use of the AstraZeneca vaccine over reports of serious blood clotting events.

The European Medicines Agency (EMA) is investigating to establish whether there is a link between the AstraZeneca vaccine and these blood clotting events but reiterated on Tuesday that the number of thromboembolic events reported in vaccinate people “seems not to be higher than seen in the general population.”

Emer Cooke, the EMA’s Executive Director said the watchdog remains “firmly convinced that the benefits of the AstraZeneca vaccine in preventing COVID-19, with its associated risk of hospitalisation and death, outweigh the risks of side effects”.