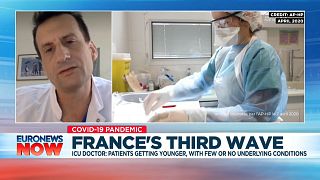 The number of COVID-19 patients in intensive care units (ICUs) in France has jumped by 10 per cent since last week, according to a tracker of daily government data, and the country’s ICU beds are now 90 per cent full.

Benjamin Clouzeau, an ICU doctor at Bordeaux Hospital in southwestern France, told Euronews that 90 per cent of their patients have the UK variant of the coronavirus, and are significantly younger than in the first and second wave of infections.

“They’re between 30 and 65 years old. They have few or no underlying health conditions. Some are overweight – but they’re not obese, they’re simply overweight,” he said in an interview.

“A fair share of them have diabetes, but that’s far from the majority. So they’re young, which is somehow positive for us because they have resources.”

These younger patients typically end up in intensive care without having even seen a GP in the first place, Clouzeau explained, “because they initially have the energy to fight this off at home, until they’re totally exhausted”.

He stressed that while people may have become somewhat numb to daily death tolls from COVID-19, the reality behind these figures is frightening.

“For the past year, French people have been bombarded with data and daily death tolls. And we don’t always realise what these figures mean: 300, 400 deaths every day – that’s like a plane crashing every day. People don’t realise this anymore,” he said.

“A few weeks ago, the people dying were very old, and somehow, we accepted that as a society. Now we are down to 200, 300 deaths a day, but it’s not old people dying anymore. These are people who still had 30 or 40 years to live.”

“We must not get used to these numbers, because if we do, the fight is lost. So let’s not forget: a plane crash every day is a big deal,” he pleaded.