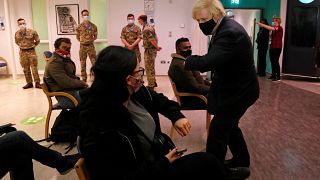 Half of the adult population in the United Kingdom has received a first dose of the COVID-19 vaccine, the health minister announced on Saturday, heralding a “huge success” for the country, which has had Europe’s highest death toll during the pandemic.

“I am absolutely delighted to tell you that we have now vaccinated half of all adults in the United Kingdom. It’s a huge success,” Matt Hancock said in a video posted on Twitter. He thanked those involved in the vast vaccination campaign launched in early December.

“It is so important because this vaccine is our way out of this pandemic”, said the minister, encouraging the population to get vaccinated.

The UK has administered more than 26 million first doses of coronavirus vaccines. On Thursday alone, 660,276 doses of vaccine were injected.

The vaccination campaign was recently extended to people over 50. Boris Johnson, 56, received a first dose of AstraZeneca vaccine on Friday, following assurances from UK and EU regulators over its safety.

The prime minister was vaccinated at St Thomas’ Hospital in London, where he spent three days in intensive care in April 2020 with COVID-19.

The UK, where the virus has killed more than 126,000, uses the Pfizer/BioNTech and AstraZeneca/Oxford vaccines. A third vaccine, Moderna, has been approved by the British regulator and should be available “in the coming weeks,” the health minister said on Thursday.

Despite an expected drop in supply in April, Boris Johnson assured that the “road map” to gradually lift the restrictions linked to the pandemic in the coming weeks would not be affected.

The government’s goal remains to offer a first dose of coronavirus vaccine to everyone over 50 by mid-April and to all adults by the end of July.

COVID-19 vaccine rollout: Which country in Europe is leading the race? 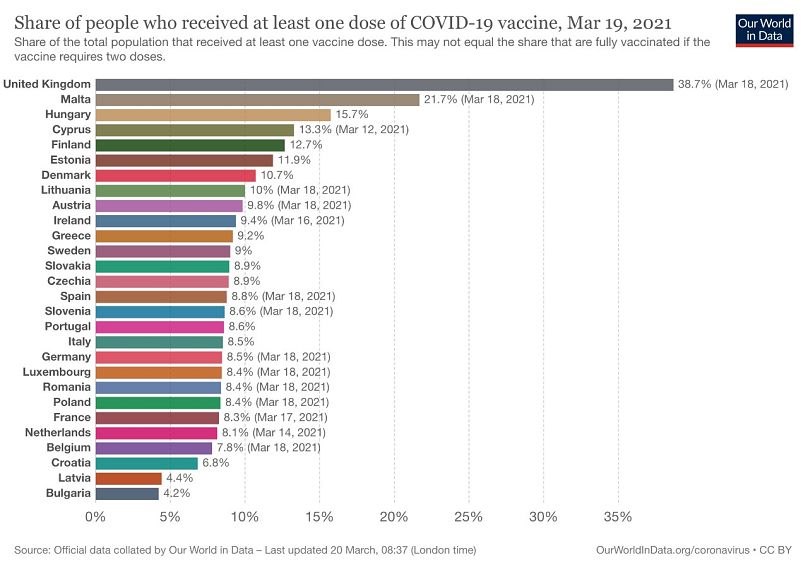 Share of total population to have received at least one dose of COVID-19 vaccine in UK / EU27 by March 19, 2021.Our World in Data project / Oxford University

The success of the UK’s vaccination programme is in stark contrast to much of the rest of Europe.

Delays to supplies procured by the European Commission were compounded by slow rollouts in individual countries. The recent suspension of the AstraZeneca jab by many countries over safety concerns caused a further slowdown.

The EU and the UK have sparred over vaccine exports, many doses from the bloc having been sent to Britain under contractual arrangements.

On Saturday the European Commission president again stepped up the pressure on pharmaceutical companies to speed up their vaccine delivery. Ursula von der Leyen said AstraZeneca in particular could face export bans to countries outside the EU if it didn’t quickly meet its agreed targets.

“We have the possibility to ban planned exports,” Ursula von der Leyen said in an interview with German media group Funke. “This is a message to AstraZeneca: You fulfill your part of the deal toward Europe before you start to deliver to other countries.”

The Commission president recalled that the EU contract with AstraZeneca provides for the delivery of doses produced both on EU territory and in the UK.

“However, we have not received anything from the British, while we are providing them,” said Ursula von der Leyen, adding that the EU had sent a “formal” complaint to the pharmaceutical group. “I am unable to explain to European citizens why we export millions of doses of vaccines to countries which produce vaccines themselves and they do not send them back to us.”

AstraZeneca is due to deliver 70 million doses of its anti-COVID vaccine in the second quarter, far fewer than the 180 million promised in the contract signed with the EU. In the first quarter, the EU is expected to have received a total of some 30 million doses, compared to 90 million planned by the Swedish-British pharmaceutical group.

Germany’s health minister has said an ongoing shortage of vaccines leaves Europe unable to prevent a third wave of the pandemic. It is one of several countries considering tightening constraints, with much of Europe experiencing a surge in infections.

Some nations have moved to impose fresh restrictions. On Saturday Poland began a new national lockdown, while similar measures were imposed on around a third of the population in several regions of France.