If fit, Cristiano Ronaldo will lead Portugal's attempt to win the Euros this summer – but is that the best option for a squad full of young attacking talent?

Portugal coach Fernando Santos could not help but shrug his shoulders and smile when asked whether his side were stronger without Cristiano Ronaldo.

"I don't think any team in the world can perform better when its best player is not around," he replied in the news conference prior to a Nations League match away to Sweden last September.

In the previous game, however, Portugal had overcome the absence of Ronaldo to thrash World Cup runners-up Croatia 4-1 in a display rated by many as the greatest of the Santos era so far. In a way, witnessing the likes of Bruno Fernandes, Bernardo Silva, Diogo Jota and Joao Felix play that day felt like a sneak peek into what the future holds for the country – and it could not have looked any brighter.

In the end, Ronaldo answered his critics by scoring twice in Stockholm, but the debate was far from over.

A month later, Santos again found himself having to face questions over the five-time Ballon d'Or winner's contribution to the reigning European champions.

quote[Dealing with Ronaldo's departure] is almost like a political problem, something that will require a summit to achieve an agreementSergio PiresMais Futebol

While he insists Ronaldo is the only irreplaceable player and guaranteed a place in his starting XI, there is a growing school of thought that the national team would be a far better and more entertaining one without the Juventus striker.

As Portugal kick off their 2022 World Cup qualifying campaign against Azerbaijan on Wednesday, the debate over whether what Ronaldo offers in terms of goals makes up for what he doesn't off the ball shows no sign of slowing down.

A national hero, the 36-year-old superstar has never left the spotlight for his country, except for a nine-month absence following the team's elimination at the last-16 stage of the 2018 World Cup. He was given a rest after moving from Real Madrid to Juventus that summer.

Over six matches, the Portuguese did quite well, remaining undefeated and topping their Nations League group ahead of Poland and Italy.

Ronaldo only returned to international football in March 2019, wasting no time in proving that his killer instinct was still there. He has averaged over a goal a game since then – 17 in 16 matches, helping his side win the Nations League that summer. 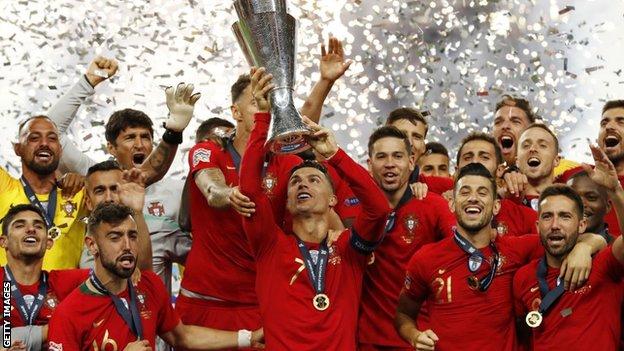 In other circumstances, that would have been more than enough to justify his untouchable status, but it no longer appears to be the case.

"When you compare this team to the 2016 Euros-winning side, there's a significant talent gap between them," says Tomas da Cunha, a football pundit for Eleven Sports and TSF radio. "We've got more world-class players now, so Santos has to figure out how he can still get the best out of Ronaldo at this point without sacrificing the emerging stars.

"In Ronaldo's absence, Portugal play in a more relaxed and uncomplicated way, especially because there isn't a reference around who is actually bigger than the team. The pieces fit together naturally. With Ronaldo, the rest of the players seem to have their decision-making unconsciously affected by the need to pass the ball to him." 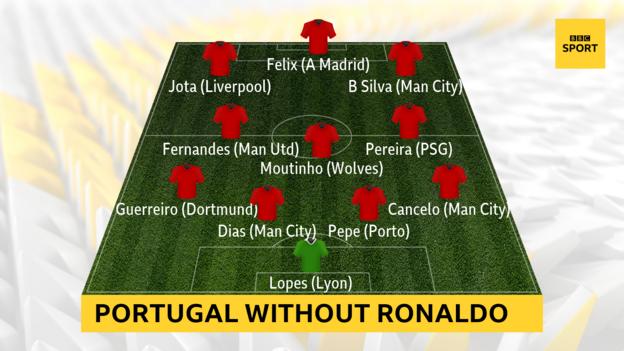 This graphic shows how Portugal lined up without Ronaldo against Croatia in September. And that does not include all the options in this alternative Ronaldo-less XI: Patricio (Wolves); Semedo (Wolves), Fonte (Lille), Duarte (Granada), Mendes (Sporting); Neves (Wolves), Oliveira (Porto), Sanches (Lille); Neto (Wolves), A Silva (Eintracht Frankfurt), Trincao (Barcelona).

Such is his imposing presence that when Ronaldo is on the pitch, his team-mates tend to play it safe and over-rely on him. The creativity and attacking fluidity are just not the same.

Unsurprisingly, Portugal become a much more predictable side.

It's necessary to rewind to the late 1980s, when Atletico Madrid legend Paulo Futre used to run the show on his own, to find any parallel to this dependence in the final third.

"It's important to bear in mind that Santos is clearly a resultadista [results-driven] manager, something that explains what he wants from Ronaldo, one of the best finishers in history," adds Rui Malheiro, a football pundit for RTP and columnist for Record.

"Santos assumes that with Ronaldo finishing the plays, Portugal get closer to converting them into goals, which is indeed true. But on the other hand, if you consider that the Portuguese player is usually technically gifted and likes to combine and connect, Portugal lose a bit of this and also of flair. 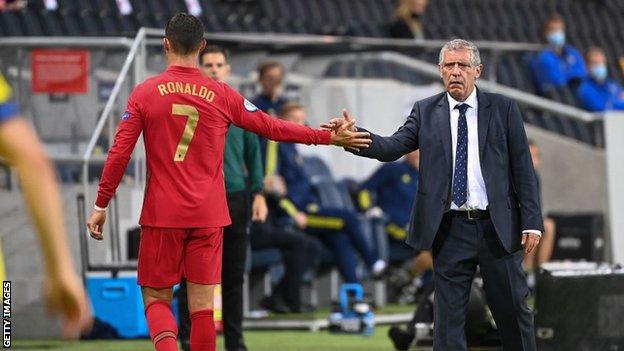 "The truth is that any team that faces Portugal nowadays knows that most of the balls are addressed to Ronaldo. Even though you have players like Felix, Jota, Bernardo and others like Pedro Neto coming through, you don't see much of that unpredictability that they are capable of providing with their clubs through line-breaking passes and in one-on-one situations.

That's a dichotomy that has followed Santos's reign since he took charge in 2014 and one very often brought up in his interviews.

It has also been used by extension to describe how the team behaves with Ronaldo – the general feeling is that although they may still play well with him, they play more beautifully without him.

Despite being the most successful footballer ever to wear Portugal's shirt, with 102 goals for his country, there have been suggestions that Ronaldo actually arrived on the scene at the wrong time from an international perspective – too late to play with the golden generation of Luis Figo, Rui Costa, Joao Vieira Pinto, Fernando Couto and Paulo Sousa; too early to spend much time with the current crop of stars.

Regardless of that, he will surely be around until at least the 2022 World Cup.

"I find it controversial to state that a team performs better without its best player, particularly when you don't have a big track record of games played in these circumstances," says Sergio Pires, a reporter for Mais Futebol.

"But when the times comes, I believe Ronaldo will be smart enough to understand he won't be able to start all matches any more – even if that sounds like a difficult issue to handle because of his stature in the game, his big entourage and his influence not just on the field but off it, too.

"It's almost like a political problem, something that will require a summit to achieve an agreement on the strategy to prepare Ronaldo's retirement from the national team. It doesn't seem to me he will stick around if he feels he can't contribute the same way he's always done. It all depends on how Portugal do at the Euros and at the World Cup."

To use comments you will need to have JavaScript enabled.
24 commentsShowLatestOldestHighest RatedMost RepliedP

07:05When he scores for Portugal, it’s “look at me”. When a teammate scores, he hardly bothers to jog over to celebrate. Not a team player IMO.11T

07:01Ronaldo shows up at international matches and is capable of scoring freely at will against any opponent. He is also happy to to be foil and distract defenders so others in his team may score. Prepared to go looking for the ball if opponents try to block assists to him, his work off the ball is as important as what he offers with the ball. Shame he is not a regular in the Premier league11T

07:00It’s funny when people say Ronaldo is better than Messi as he’s done it as the international level. CR won Euro 2016 despite only beating Wales in the whole tournament and not playing in the final. Amazing player but come off it, his international performance has not been exceptional by any measure. He may change that this summer though!11H

06:57Utterly pathetic journalism. I guess it’s a really slow day at the bbc when they’re asking if one of the greatest players of all time,and one that is still consistently performing on the world stage should be dropped…………
Someone should give their head a wobble.11T

07:03to hicko"Utterly pathetic journalism. I guess it’s a really slow day at the bbc when they’re asking if one of the greatest players of all time,and one that is still consistently performing on the world stage should be dropped…………Someone should give their head a wobble."Torys Nicked Dads Pension replied: BBC click baiting dragging sports journalism ever downwards again11More replies (1)downJ

06:52Even if they were, why on Earth would you leave out one of the greatest players of all time? Even when he is off the pitch, he is encouraging and motivating his team mates (Euro 2016 Final). His attitude, work ethic and focus are absolutely second to none, not to mention his ability (he can score/assistant from anywhere) and has been a team player in 3 different club sides. HAS to play when fit.01I

06:50Nope …he gets hat tricks in international competitions where others like messi never showed up12B

06:49Portugal are fantastic team even without him but what he brings to the team is brilliant21G

06:47The age old question, do you select players on form or “big names” because that’s who you’re expected to select **cough, cough Gareth Southgate**
Certainly in the euro 2016 final he did nothing and hes coming to the final few years of his career, but you always want to see the best players play in competitions.
Encouraging for the Portuguese fans to know the team is just as good without him.10P

06:46Portugal are a very strong side with or without Ronaldo in the starting 11, they look a better all round team now than when they won it in 2016. They beat France in the previous final in Paris when Ronaldo had to leave the pitch early through injury, which proved even then that they can get the results even without his influence on the pitch. Definitely like Messi though one of best players ever.20T

06:46Don’t entertain this stupid narrative. When it comes to pressure games you need your big game players. And there’s none better than Ronaldo33A

06:45Ronaldo will always be a big loss to any team.

The English media like to big up the rest of the team in particular Fernandes, but as he has proven time and again, he can only be effective against weak teams.53S

07:09to Redburn"No"Torys Nicked Dads Pension replied: Your opinion worthy of an additional exclamation mark to round it off? Portugal are blessed with their luck having a player like Ronaldo in it.00T

Comment posted by The Gorg, today at 06:36The Gorg

06:36It’s a bit like asking if Argentina are better without Messi, or England without Kane. Probably not but none of them have produced their club form for their country on a consistent basis.00D

06:46to The Gorg"It’s a bit like asking if Argentina are better without Messi, or England without Kane. Probably not but none of them have produced their club form for their country on a consistent basis."dave replied: Did you just compare Kane to Messi ? 😳😳😳01More replies (2)downT

06:33Are a team better without on of the greatest players of all time? No.
QED24Back to topunknown
Source