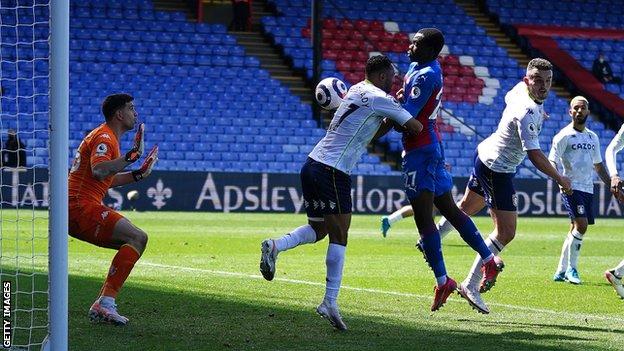 Mitchell began his career with Palace, with this his second season with the first team

Tyrick Mitchell says it was "like I blanked out" after scoring the first goal of his career to give Crystal Palace a comeback victory over Aston Villa in the Premier League.

In an engrossing encounter that belied its 'dead rubber' status, both sides contributed energetic displays full of attacking intent, with Mitchell's late goal rewarding Palace for a superb second-half showing.

The 21-year-old full-back was in the perfect spot with six minutes left to bundle the ball in with his shoulder following Eberechi Eze's fluffed cross.

"I couldn't tell you what I was thinking in that moment but as soon as it went in, it was just joy," said Mitchell, for whom Sunday's game was his 23rd for Palace. "It was like I blanked out.

"It is definitely a dream come true for me and my whole family. It's been a big season for me personally. Every day was hard but all the work has paid off."

Trailing 2-1 from the 34th minute, Palace battered at the door after the break until the visitors' resistance was finally broken at Selhurst Park.

With 15 minutes left, Wilfried Zaha produced a driving run before cutting inside and firing a fierce shot that deflected into the net off Villa defender Ahmed Elmohamady, with Mitchell netting soon after.

Palace had already come back into the game once, Christian Benteke heading in against his former club following John McGinn's well-taken opener.

Anwar El Ghazi lashed in at the back post to restore Villa's lead – a goal that looked like being the winner until Palace's late rally.

Already safe from relegation, the win took Palace to 44 points – with a chance of hitting the 50-point mark for the first time in the Premier League.

On a more positive note for Villa and potentially England, Jack Grealish made a second successive appearance from the bench following injury to provide further evidence of his improving fitness before this summer's European Championships.

Palace manager Roy Hodgson said Mitchell received a standing ovation from his team-mates after returning to the changing room.

"It was fitting," said Hodgson. "In the changing room I mentioned him but he was speaking to the media. When he came back the players and staff burst into spontaneous applause and the smile on his face is something that will remain in my mind.

Mitchell was not the only Palace player who impressed.

Before kick-off, Everything's Gonna Be Alright by Bob Marley echoed around the ground and the home team did their best to back up such a sentiment on the field.

Sometimes maligned for his style of play, Hodgson has comfortably kept Palace in the Premier League during his four seasons at the club, leaning on a core of experienced and reliable players.

With the 73-year-old's contract due to expire this summer along with those of a host of first-team regulars, a clear-out seems likely, but Sunday's performance provides further food for thought.

Benteke is one of those whose deal is about to end, although he is arguably in the form of his Palace career, having netted for the third game running and for the fifth time in nine games.

He would have had another but for a superb Emi Martinez save that tipped his header from a corner on to the bar in the second half.

Zaha's talents are undoubted and Sunday showed he still has the drive and desire, qualities also on display from Andros Townsend, Cheikhou Kouyate and others.

It is perhaps Eze and Mitchell, though, who Palace should be using as the template going forward. Both are young, talented, forward-looking players around which Hodgson – or, more likely, his successor – can build a side.

"In the second half that was the Crystal Palace that I've seen in the last four years – that never-say-die spirit," said Hodgson.

"We accept we'll never roll teams over and we have to work hard to get a result and we did that today. The players deserve an awful amount of credit."

Defeat does not overshadow Villa progress

When Villa beat Palace 3-0 on Boxing Day, they were just outside the top four and pushing for an unexpected European spot.

The following five months have provided a big check to such lofty ambitions, but they should not detract from what has been a season of significant progress for a side who narrowly avoided relegation last campaign.

Clearly undermined by the absence of star man Grealish for 13 games during which they won only three, Dean Smith's side still pack a punch without the England forward, as they demonstrated on Sunday, especially in a first half that contained their two goals.

They could have had more, with Kortney Hause – in for the injured Tyrone Mings – twice heading wide from corners.

However, in the second half the absence of Mings and Matty Cash told, as a seemingly tired Villa wilted in the face of the Palace onslaught.

They have two games left to finish in the top 10, but, with Tottenham away and Chelsea at home to come, it looks likely Villa will have to settle for the best of the bottom half.

"It certainly hits our hopes," said Smith. "We are four points behind Leeds United and we just have to finish well.

"We looked a really good team in the first half today. We were unfortunate not to go in more than a goal to the good.

"It became more of a scrappy game and we're frustrated with the goals they did score."

Crystal Palace scored three goals in a Premier League match for the first time since their 5-1 win over West Brom in December, while they did so at Selhurst Park for the first time since a 4-1 win over Leeds in November.Aston Villa have lost four of their past seven league matches when scoring first. Prior to this game, Villa had won 12 of their first 13 league matches this season after scoring first.This was Palace's first Premier League win against a team as many as three places above them in the table since November 2019.There were 42 attempts at goal (23 for Palace, 19 for Aston Villa), with only Manchester United 6-2 Leeds United in December seeing more in a Premier League game this season (43).Palace defender Tyrick Mitchell became the club's youngest top-flight scorer (21y 257d) since Clinton Morrison in 1998 against Sheffield Wednesday (18y 361d). Mitchell is the youngest to score and assist in a Premier League game for Palace since George Ndah in January 1995 against Leicester (20y 22d).Anwar El Ghazi has scored seven away league goals this season, the most by a Villa player since 2012-13, when Christian Benteke scored eight and Gabriel Agbonlahor scored seven on the road.Since the start of the 2012-13 season, only Olivier Giroud (32) has scored more headed Premier League goals than Benteke, whose 31 is the joint-ninth most in Premier League history, level with Tim Cahill.Palace winger Wilfried Zaha scored his 11th league goal of the season, his best in a top-flight campaign.

Palace host Arsenal on Wednesday (19:00 BST) before a final-day visit to Anfield to face Liverpool.

Tottenham are the visitors to Villa Park on Wednesday (18:00), with Smith's team facing Chelsea at Stamford Bridge on Sunday.