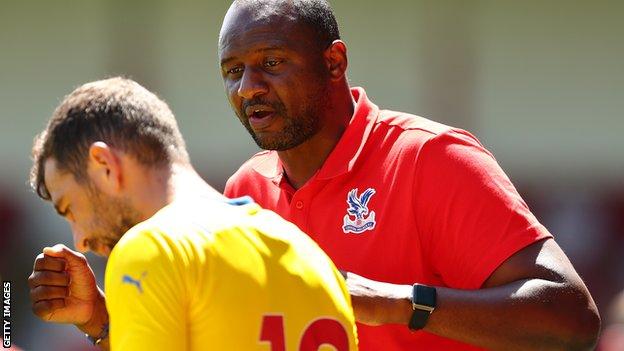 In the opening passages of 'When Eagles Dare', the excellent documentary about Crystal Palace, chairman Steve Parish reflects on the struggles the club he supported as a boy has had to establish themselves in the Premier League.

"In the early 90s," he said. "If you went to Selhurst Park and Highbury, you wouldn't have had a different experience. We were in the same stratosphere. But we never seemed to grasp the moment."

Such a comparison between Palace and Arsenal is a bit of a stretch given the respective histories of the two London clubs.

However, this season comparisons and contrasts will feel unavoidable.

Patrick Vieira is listed at number four on the list of Arsenal's greatest players on the Gunners' own website. But now he is a rival.

After spells with the Manchester City development team, New York City in Major League Soccer and Nice in France, the 45-year-old has returned to the Premier League as Palace's new manager.

On Saturday, his first game in charge ended in a 1-0 friendly win at Walsall, Wilfried Zaha scoring the only goal.

Patrick Vieira – what kind of manager are the Eagles getting?

Vieira looked purposeful and business-like throughout but also found time to pose for a selfie with a steward and sign some autographs.

He maintained that relaxed air for most of the first half.

It was 33 minutes before he left his seat in the dug-out – for a word with Zaha, who was on that side of the pitch – which suggested he was using those 45 minutes as an assessment of the strength of his established squad.

After half-time, when the entire Palace team was changed and given a far more youthful look, Vieira was a regular presence.

Forward Jesurun Rak-Sakyi, 18, was given a lot of attention. It could have been because the former Chelsea academy player was closest to Vieira, but they did also speak again during the drinks break and the conversations appeared more instructive than directions given to his defenders. 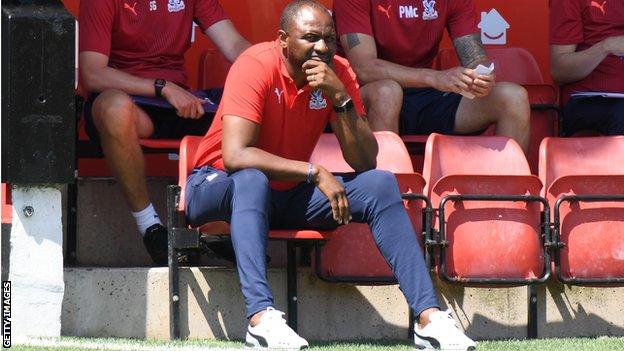 It also reinforced the suggestion that Vieira is at his happiest when he is working with younger players.

Given the blank sheet of paper he has as a result of 10 Palace players reaching the end of their contracts last season at the same time as former boss Roy Hodgson, this might work quite well.

From the squad involved in Hodgson's first game in charge, against Southampton in September 2017, five started against Walsall. Another three – Scott Dann, Andros Townsend and Patrick van Aanholt – only left when their contracts expired last month. Zaha was injured at the time, which shows how little the Palace personnel has changed.

Vieira will be wary of such a small number of established players. Nathaniel Clyne played at Walsall even though he is technically out of contract but Palace's first significant signing of the summer, 19-year-old winger Michael Olise, an £8m arrival from Reading, fits the Frenchman's template perfectly.

'Keep the ball, pass the ball'

It was clear Vieira wants his team to respect possession but move the ball quickly.

Every so often, he would deviate from his usual position, leaning forward, elbow on his knee, finger to his lips, a study of concentration. He would point something out to his trusted coach Kristian Wilson, who has been with Vieira on every step of his coaching journey, starting at Manchester City.

One move started on the Palace right and was manoeuvred to the left with fast, accurate, short passes. Had Tyrick Mitchell found Zaha with his intended through ball, it would have been perfect.

"There has been a big emphasis on us keeping the ball more and creating more chances with the players we've got in the top third of the field," said defender Martin Kelly afterwards.

"For us, it's about working as a team to get the ball to those guys – our 'danger players' as such." 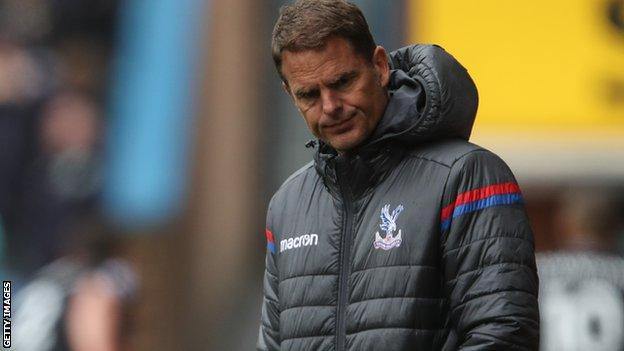 It was not a surprise Zaha turned out to be the match-winner. His 180-degree turn inside the Walsall half was followed by a darting run to the edge of the box, a one-two with young striker Rob Street and a first-time finish.

Although he flitted in and out of the game and got frustrated at times, either with the referee, the opposition or his team-mates, he seemed to be playing on a different level.

Yet again this summer, speculation around Zaha will be intense. Yet again, the same question will be asked: will anyone be willing to meet the transfer fee Palace would want for a 28-year-old who still has two years left on a lucrative, watertight contract?

As previous transfer windows have shown, just because Zaha would like to test himself at a higher level again – after his short stay at Manchester United – does not automatically mean it will happen.

Vieira did not speak to journalists or Palace's own media channels after the game and also ignored autograph requests at the end.

He did have one pretty significant conversation though, talking at length to Palace sporting director Dougie Freedman, who is credited with the Olise signing and will be responsible for future transfers.

The chat was amicable, as it would be at the start of the relationship. But Vieira is known for demanding high standards and keeping people on their toes.

What Palace certainly do not want is a repeat of the Frank de Boer fiasco in 2017, when the Dutchman was sacked after only four Premier League games.

The situation is undeniably similar, a legendary former player from overseas taking over from an Englishman known for organising sides brilliantly.

Where the Dutchman failed quickly and acutely after succeeding Sam Allardyce, Parish will hope the Frenchman enjoys considerably more success and a much longer tenure having succeeded Hodgson.

Lifting the Eagles alongside Vieira's former club Arsenal might feel like a tall order, but it feels safe to assume the iconic former midfielder will not lack courage for his convictions.

How to be a teenager and an elite athlete: Hear from one of the youngest participants at Tokyo 2020Have You Heard George's Podcast?: George the Poet is back with season three of his award-winning podcastcommentsView Comments21

To use comments you will need to have JavaScript enabled.
21 commentsShowLatestOldestHighest RatedMost RepliedS

Must be an indication of future signings as the only dangerous players they have are the ones with covid symptoms.11B

13:57Vieira has never come across as the brightest spark. I fear the worst for Crystal Palace.01T

14:00to Bob Corkhill"Vieira has never come across as the brightest spark. I fear the worst for Crystal Palace."TheBlaggert replied: How do you work that out? Sounds like you’re the one short of a brain cell or 900G

13:57Clearly we’re in the quiet period when there’s no proper football news to report on.10S

13:56Palace and Norwich are going to get a good ol’ whippin all season.01B

13:54Best of luck to Patrick…hope its a solid appointment and he manages to find a bit of success there and it does not go the same way that De Boers appointment went. All the best to him and Palace!!21B

13:51Dougie Freedman, another managerial failure. Something tells me you’ll be asking for Roy back in 12 months.22B

13:56to Brass Eye"Dougie Freedman, another managerial failure. Something tells me you’ll be asking for Roy back in 12 months."Bazza84 replied: How about we actually give the guy a chance first before jumping the gun nostradamus?10More replies (1)downT

13:51Patrick, May your patron saint St.Patrick brings you many blessings and the Irish luck so even when chips are down ( and they will be) you won’t lose hope and land like a cat on four paws and have at least 7 lives with Crystal Palace.
I am sure Roy Keane would also sign this message. Not only me.
Best,11B

13:59to that swashbuckling polander of garwolin"Patrick, May your patron saint St.Patrick brings you many blessings and the Irish luck so even when chips are down ( and they will be) you won’t lose hope and land like a cat on four paws and have at least 7 lives with Crystal Palace. I am sure Roy Keane would also sign this message. Not only me. Best,"bushwacker replied: We’re just double checking this comment.M

13:51Pretty much describes the tactics of every football team ever.11M

13:51Ok, that’ll be up there with “we just need to put the ball in the back of the net”. Easily said, but do you have the players and team to do it?41L

13:48As an Arsenal fan I’m interested to see how Vieira fares during the new season. I have a feeling he may struggle. But perhaps new ideas and a fresh impetus will help Palace now Hodgson has gone. It’ll be interesting to see.11V

13:47That’s all very well and good BUT you need the players who can actually do it!!!62R

13:46Vieira will be a master tactician I’m sure. Good luck to him. Of course, there will be the haters of Arsenal and of other ‘aspects’….. That will be negative and critical. But from the normal decent point of view, wishing Palace all the best and it’s a great appointment.33W

13:46When someone of the standing of Patrick Vieira tells players what to do, you can be sure they are going to listen.
Promising signs too for the youngsters in the squad.
Good luck Palace in the new season.45B

13:46So no team effort , just get the ball to zaha…. So he can overrun it with no end product56Back to topunknown
Source