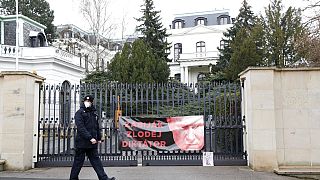 The Czech Republic is expelling 18 Russian diplomats who authorities say have been “clearly” identified as spies, in a case related to a huge ammunition depot explosion in 2014.

Prime Minister Andrej Babis said the move is based on “unequivocal evidence” provided by Czech intelligence and security services that Russian military agents were involved in the incident, which killed “two innocent fathers.”

“The Czech Republic,” Babis said, “is a sovereign state and must adequately react to those unprecedented findings.”

He added that President Milos Zeman, who is known for his pro-Russian views, has been informed about the development and has “expressed absolute support for us.”

The massive explosion took place in the eastern town of Vrbetice on October 16, 2014, in a depot where 50 metric tons of ammunition were being stored.

Another explosion involving 13 tons of ammunition took place in the same depot on December 3 that same year.

Interior Minister Jan Hamacek, who is also serving as the country’s foreign minister, said 18 Russian embassy staffers had been “clearly identified” as Russian military spies in connection with the case. They have been ordered to leave the country within 48 hours.

Hamacek also said the case was likely to significantly harm Czech-Russian relations. “We’re in a similar situation to Britain in the attempted poisoning case in Salisbury in 2018,” he said.

The United Kingdom, which expelled 23 Russian diplomats on March 18, 2018 after Russian agents used a Soviet-era nerve agent to poison a former Russian spy, Sergei Skripal, and his daughter Yulia in the English city of Salisbury, expressed support for the Czech decision.

“The UK stands in full support of our Czech allies, who have exposed the lengths that the Russian intelligence services will go to in their attempts to conduct dangerous and malign operations in Europe,” Foreign Secretary Dominic Raab said in a statement on Sunday.

“We are as determined and committed as ever to bring those responsible for the attack in Salisbury to justice, and commend the actions of the Czech authorities to do the same. Russia must desist from these actions, which violate the most basic international norms,” he added.