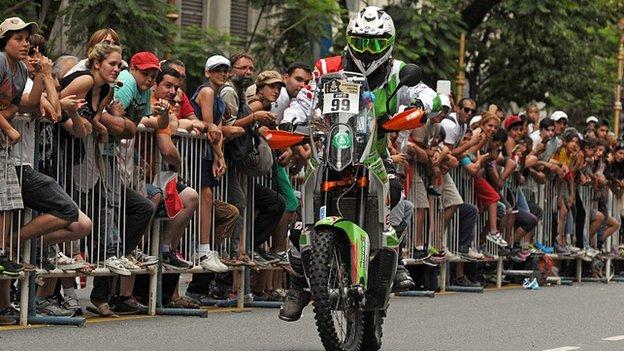 French motorcycle rider Pierre Cherpin has died five days after crashing during the seventh stage of the Dakar Rally, organisers said on Friday.

Cherpin, who was taking part in his fourth Dakar rally, had neurosurgery in Saudi Arabia after the crash.

The 52-year-old was placed in a medically induced coma in hospital.

"During his transfer by medical plane from Jeddah to France, Pierre Cherpin died from the injuries caused by his fall," Dakar Rally organisers said.

"Urgently operated in neurosurgery, he had since then been kept in an induced coma, his condition having remained stable over the past few days.

"He was airlifted from Sakaka to Jeddah's hospital from where he was going to be transferred to Lille's hospital."

Cherpin's death is the first of the 2021 Dakar Rally, an annual off-road endurance event where competitors use vehicles including bikes, quads, cars and trucks.

FIA Formula E: 2021 season begins on Friday and you can watch on the BBC