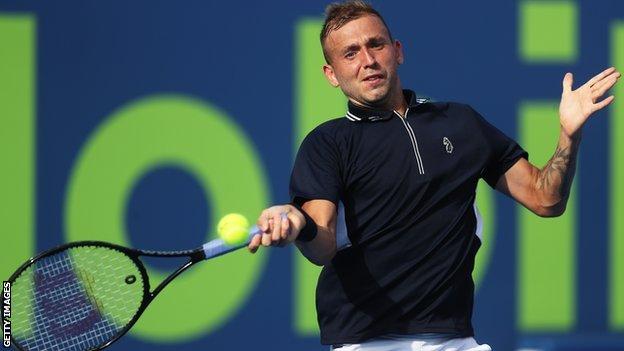 British number one Dan Evans is out of the Dubai Tennis Championships after a 6-4 4-6 6-4 second-round defeat by Russia's Aslan Karatsev.

After losing the first set to the Australian Open semi-finalist, Evans fought back from 4-3 40-0 down to take the second.

Karatsev got what proved to be the decisive break in the first game of the final set before serving out the win.

He will play Italy's Lorenzo Sonego in the last 16.

Evans, who was beaten in three sets by Roger Federer in Qatar last week, struggled early on in response to some booming returns of serve by Karatsev.

The 27-year-old Russian broke Evans' serve twice on his way to taking the first set and a straight-sets victory looked likely when he broke twice more at the start of the second.

Evans, though, showed resilience to fight back and win four successive games to level the match.

Karatsev, up from 114 to 42 in the world rankings after his performance in Melbourne last month, regained his composure in the decider, breaking serve immediately and saving two break points on his way to victory.