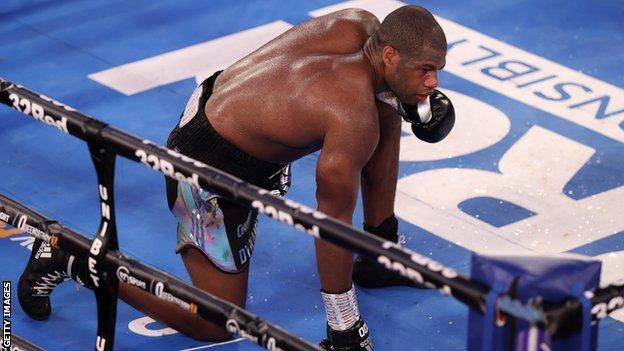 British heavyweight Daniel Dubois will make his return to the ring six months after suffering a broken eye socket when he faces Bogdan Dinu on 5 June.

Dubois, 23, sustained suffered a broken orbital bone and nerve damage around his left eye during his first career defeat by Joe Joyce on 29 November.

He will fight Romanian Dinu, 34, for the vacant WBA interim heavyweight title, with the venue to be confirmed.

"I am excited to be back in the ring," said Dubois.

He added it had been "frustrating" not being able to train in the gym because of his injury.

A group of fighters past and present said Dubois "quit" in the bout against Joyce after he was stopped in round 10.

Dubois responded by saying he hoped to return to ring to prove wrong those who accused him of quitting.

"This is my chance to remind people of what I am really about, which is winning fights in a devastating fashion," he said.

"I don't need to make any excuses for the Joe fight because everybody could see the issue with my vision, but Joe won fair and square and we move on.

"Time is on my side but I don't intend to slow down my progress and I am more than happy to be returning to the ring in a big title fight that puts me right back in the picture."

Dinu has lost only two of his 22 fights, both to high-quality opposition in Jarrell Miller in 2018 and Kubrat Pulev in 2019.

"I respect Dinu and accept that he could provide a tough test," added Dubois.

"But I can only see one outcome and that is me leaving the ring with another major championship belt for my collection."