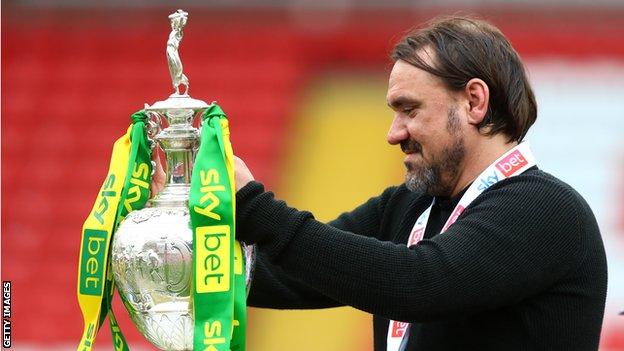 Norwich City boss Daniel Farke has signed a four-year contract extension until the summer of 2025.

Farke, 44, arrived at Carrow Road from Borussia Dortmund in May 2017 and led the club to a 14th-placed Championship finish in his first season in charge.

The German guided the Canaries to the Premier League in 2019 and won promotion again last season.

"I'm absolutely over the moon and feel pretty emotional in such a moment," he told the club website.

"I'm unbelievably grateful for all of the trust and support."

Norwich earned 97 points on the way to the Championship title last season, returning to the Premier League at the first time of asking following their relegation in 2020.

"It is a pleasure to be allowed to continue to work on this level with such a special club and our unbelievable owners," said Farke.

"Now it's about going the next step, doing everything we can to make sure this club becomes an established Premier League side."

Sporting director Stuart Webber said: "It's great news for the football club. Daniel and his staff have been a huge part of what we are building and to tie them down to new deals was one of our key objectives at the start of the summer."

Norwich start their Premier League campaign at home to Liverpool on 14 August.

Why Norwich's Premier League survival will not be bought