Oxted returns to defend his July Cup crown at Newmarket after winning the King’s Stand Stakes at Royal Ascot; Oxted battling it out with Ed Walker’s Starman at the top of the betting for Saturday’s Group One Harry Teal reports July Cup champion Oxted to be in “great form” as he returns to defend his Newmarket crown on Saturday.

After a disappointing trip to Saudi Arabia in February this year, five-year-old Oxted – trained by Harry’s father Roger – has steadily improved with each of his three runs back in the UK.

An underwhelming run at Newmarket in April was followed by a third-placed finish behind Starman at York, before getting back in the winner’s enclosure with victory in the King’s Stand at Royal Ascot last time out.

Teal told Sky Sports Racing: “He’s in great form. He did his last little bit [of work] yesterday and felt as good as ever.

“After Saudi he was a little bit flat and lacklustre at home. We gave him a break and he probably was a couple short going into Newmarket. He looked a bit flat still.

“At York he was coming back to himself but he still wasn’t quite 100 per cent. He was giving me that oomph that he did before the July Cup last year.

“Before Ascot he was in great form.” 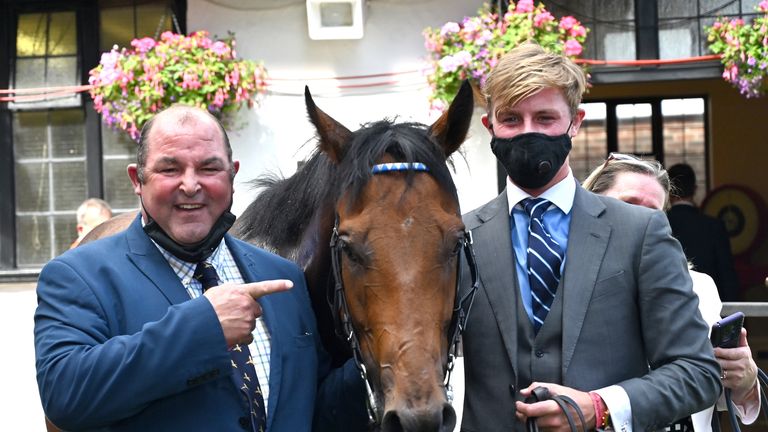 Teal’s stable star is a son of former July Cup winner Mayson, who won the race in heavy ground conditions in 2012.

Oxted’s win at the Suffolk track last year came on good ground so connections are happy to see the rain stay away.

“Our two best runs have been on good to firm or good ground so we wouldn’t want it too heavy. He is versatile and goes on it but we’ll see.” Despite being held at flat racing’s headquarters in Newmarket, this year’s leading chances both hail from the racing-mad village of Lambourn in Berkshire.

Oxted’s chief danger according to the betting for Saturday’s big race is Starman, trained by Ed Walker just half a mile down the road from the Teal residence.

“It’s brilliant for Lambourn,” Teal said. “We’ve also got William Muir, who has Pyledriver, us and Ed Walker.

“It’s great for us to be able to put it up to the big guys. We’re a smaller outlet but we’ve got the horses and we’ve proved we can punch with the big guys.

“We don’t have flocks of two-year-olds coming through the door every year, not yet.

“We will get there one day and attract the bigger names and bigger owners. We have had a few come through and when we get that good one, we’ve proven that we can do the business.”