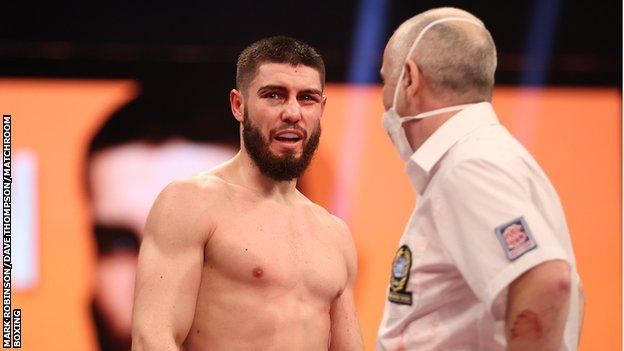 The fight, postponed three times from its original 2018 date, produced some frenetic action at Wembley Arena.

Kelly, 26, with 10 wins and a draw previously, shook his 32-year-old opponent with a left hook in round two.

But Avanesyan cut Kelly's eye in the same round and constant pressure saw the towel thrown in during round six.

Both men were fighting for the first time since December 2019 and, after Kelly's impressive start, the shorter Avanesyan began to exert control.

Kelly was given a standing count in the sixth and, as the combinations to the body and head from Avanesyan continued, the Sunderland boxer's team spared their bloodied man from further punishment.

Avanesyan's British trainer Carl Greaves told Sky Sports: "I knew exactly how it was going to go – I've spent over five years with David, he finds a way every time. I was so confident in this fight."

Promoter Eddie Hearn tipped the Russian for a world title shot, saying: "Sometimes you come across a guy that will not be denied, that's too strong, that has the will beyond others and tonight that was David Avanesyan.

"Josh Kelly took the step up and should be applauded for that. He fought a world-class fighter but he's a young man and can come again."

A left hook from 30-year-old Valdez put his rival on the canvas with one second left of the 10th round.

Berchelt, 29, fell on his front and, after being turned onto his back, remained motionless before being helped to his feet by the ring doctors.

"I have a list of people who doubted me," said Valdez, who is unbeaten in 29 fights and had floored Berchelt twice prior to the knockout.

"There is nothing better in life than proving people wrong. Don't ever let anyone tell you that you can't do something."