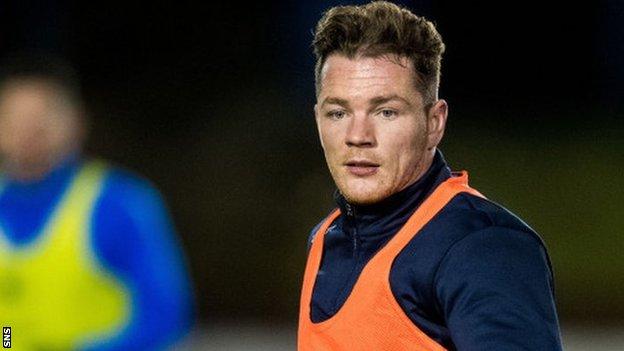 Albion Rovers' David Cox says he has quit football after claiming he was verbally abused about his mental health struggles by an opposition player.

Cox, 32, left the stadium at half-time of his side's game with Stenhousemuir and said he was taunted about his previous attempts to take his own life.

Stenhousemuir have brought the matter to the attention of the Scottish FA and started their own investigation.

"The club is aware of a verbal altercation," the League 2 club said.

"We have spoken to the players involved, David Cox (Albion Rovers) who was on the bench, and Jonathan Tiffoney (Stenhousemuir) who was playing.

"Both players are making claims of serious and wholly inappropriate comments being made during the game that have implications for player wellbeing and mental health.

"Whilst we accept that things can get said during a game, we believe the allegations are sufficiently serious enough to merit a more detailed investigation."

Tiffoney is denying the claims but the Scottish FA have begun an investigation into what happened.

Former Annan Athletic and Cowdenbeath striker Cox has gone public a number of times about his battle with depression and the abuse he has received within the game.

In a social media video, the part-time player said: "Second half just starting Albion Rovers-Stenhousemuir and I have left the stadium. I wasn't playing tonight, I was on the bench.

"One of the boys in the Stenny team, we were having a bit of to and fro and they had a go at my mental health. Told me I should have done it right the first time.

"Some folk might not think it's a big deal, but I'm fed up listening to it. I don't get paid enough for it.

"If they had put me on the park, I'd probably have broken the boy's legs deliberately. I tried to speak to the referees about it, but they didn't want to know because they didn't hear it.

"So I'm going to do something about it and for me it's leaving the game. I'm done with it. I either keep playing and I'm going to batter somebody on the park, which is not good and will result in me being the bad one."

If you are affected by the issues in this article, help and support is available at the BBC Action Line.